Information Dissemination: The Indian Navy, Transparency and the Russian Factor

Information Dissemination: The Indian Navy, Transparency and the Russian Factor 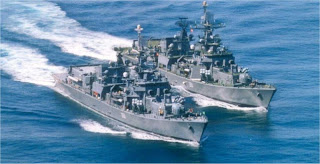 ​
We enjoyed Norman Polmar's excellent piece on the Indian Navy this morning. The first paragraph notes how bloggers spend a great deal of time observing the growth of the Chinese Navy and ignores the Indian Navy growth, which gave us the impression he might be talking about us. Could be, we admit being fixated on Chinese Naval developments, and we don't have a good reason why we don't give equal treatment to India, although we do feel we do a good job following naval activity involving India as well.

The article is an interesting read in full, and an informative update to the course charted for the Indian Navy looking to the future. While he doesn't mention the project specifically, we are very interested in Project 17 stealth corvette project India is developing, in particular we would love to see Lockheed Martin (PDF) score that potential export. Of all the aspects discussed in the article though, this is where our discussions led.

Whereas in the past few decades the Indian Navy has relied upon Soviet and -- to a lesser degree -- British naval technology, Indian leaders are shopping world-wide. Israeli, French, and South African as well as Russian weapons are being sought. And, the former U.S. amphibious ship Trenton (LPD 14) was transferred to India in 2007 and it is likely that six Lockheed Martin C-130J Hercules aircraft will be acquired. Obviously, there are other U.S. naval platforms and systems of interest to India.

Thus, the Indian Navy is undergoing a massive expansion. By some criteria the naval expansion is greater than that of the other services. And, unlike Chinese naval modernization, India's efforts are taking advantage of essentially all of the world's naval technologies and are being undertaken with relatively little publicity.

Russia, Britain, United States, France, South Africa, Israel, and don't forget the Italians are among just a handful of nations India has defense partnerships with. India calls this diversity of source, but I've also heard more than one Indian officer call it a logistical nightmare. There is one thing you never hear though, illegal copying or theft of property for defense. India has a great reputation in the defense industry, which is why everyone wants to do business with them, and that reputation can be directly sourced to one nation in particular: Russia.

We believe the reason that India's rather rapid expansion doesn't get as much attention is directly related to this reality of India. Essentially, cooperation with the global defense industry market has created transparency, and with transparency via the international defense industry the image of India comes off as a benign rapid military expansion.

Now consider the image of China, which is far from transparent in their defense purchases and is usually associated with the image of an emerging fire breathing dragon. In particular, when discussing the rapid expansion of the PLAN it is noteworthy the discussion rarely starts with the innovations by China, rather the discussion almost always begins by noting what technologies the Chinese have "stolen" from other countries to build up their Naval forces. 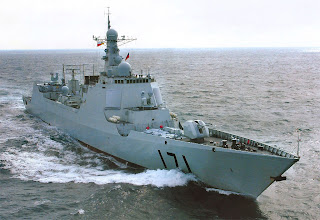 Feng has a discussion on this topic, and he notes this SIGNAL article by James C. Bussert which helps forward the theory that the PLAN has essentially become a technological clone of other nations, particularly Russia, without licensing. Feng shoots a number of holes in the article, with a Gatling gun no less, but regardless of whether you believe James C. Bussert or Feng, the bottom line is the damage has already been done. The concept of illegal cloning of technology by China, shrouded behind the absence of transparency contributes to the adversarial perspectives of the Chinese and the United States. We also note the loudest complaints regarding Chinese cloning is one country in particular: Russia.

Getting back to Norman Polmar's observations, we tend to think at the end of the day when you compare the treatment of India's naval expansion as benign and the treatment China gets for its naval expansion, it is ultimately due to two primary factors. First the presence of transparency in defense purchases for India and the absence of transparency for China has led to all kinds of speculation regarding China's military capabilities, to the point open source observers often find disagreement with the more official analysis. Armed with open source imagery and video, often the open source information is very difficult to discredit though, raising questions regarding the quality of the information released through official sources.

The second factor is the inclusion of the global defense industry in the expansion through competition by India compared to the indigenous development absent international competition in the expansion of Chinese naval forces. With that absence comes a lack of good information that ultimately has observers focusing on similar visible similarities to technologies of other countries, which of coarse really says almost nothing since physical appearance is the absolute worth benchmark for measuring capability of electronic systems.

As we observe the differences between emerging naval powers, if we take out the transparency factor, we do wonder what influence the claims made by Russia has on the perceptions of Chinese naval expansion and the perception of Indian naval expansion by the United States. Might not be a big deal, but it was in no small part the Russian media in late 2003 pushing the public discussion that the indigenously developed four-array multifunction phased array radar on the Type 052C was a copy of AEGIS. One would think the public perception, and acceptance of the perception that China is the worlds largest military technology thief benefits Russian national security policy, in particular when dealing with the United States.

All the espionage cases that have popped up over the last decade certainly contribute to that perception, rightly or wrongly, although one would be a fool to think the US isn't actively involved in espionage of China as well.