Guys, Indian Army has done a tremendous job in helping the stranded people, rescued many from near certain death from landslides even to the peril of their lives. Only the Indian Army can be so selfless be it war or peace when duty calls.

This dedicated thread for all news on their bravery and especially the various photos and videos. 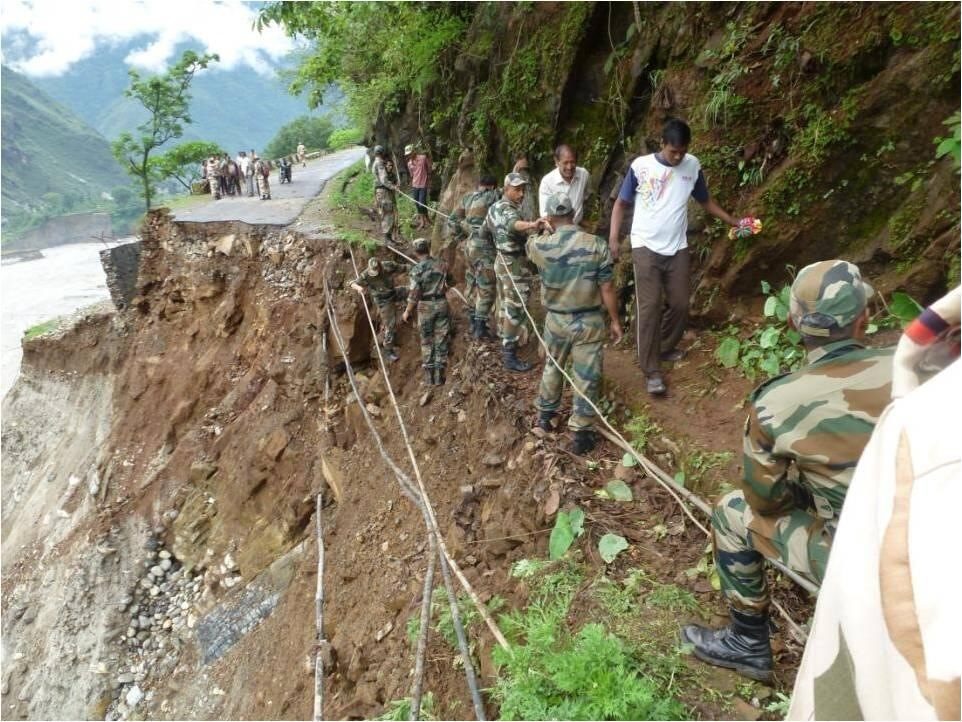 Army has launched one of the biggest human rescue operations in Uttarakhand. It today mobilized 2500 additional troops for rescue and relief efforts, as it simultaneously reached out to people on all four different axes, viz, Rishikesh – Uttarkashi – Harsil – Gangotri axis; Rudraprayag – Kedarnath axis, Joshimath – Badrinath axis and Dharchhula – Tawaghat axis in Pithoragarh district. It today opened road upto Uttarkashi after clearing 16 landslides. Road has also been opened upto Sonprayag on Kedarnath axis after successful launch of bridge across Vasuki Ganga between Mundkatiya and Sonprayag.

2500 stranded people have been evacuated from Sonprayag due to this newly opened road. Area of Kedarnath is totally cut off, especially the stretch between Gourikund and Sonprayag. Troops skilled in mountain rescue operations including paratroopers heli dropped with specialized equipment have been inducted to reach out and link up with people stranded in isolated areas along Kedarnath and Badrinath axis.The Army has so far rescued approx 11000 people, mainly from Govindghat and Harsil. About 10000 people are also being provided food and medical assistance.

On receiving information that 50 to 60 people were stranded and isolated on Pindari Glacier and 12 on Sunder Dunga Glacier in Kumaon region, an Army column led by two officers and 77 soldiers reached Kapkot in Bageshwar district this morning. The column is currently moving by foot towards Gumla and is expected to reach both the glaciers and is likely to link up with people by 21 June.

Army also established contact and rescued 11 members and 43 porters of a mountain expedition from Arva Tal on Gangotri – Mana axis. Expedition members have now been brought safely to Ghastoli and will be relocated to Badrinath after medical aid is rendered. Communication nodes have been established at Gaucher, Harsil, Joshimath and Rudraprayag to enable people to contact their families. 30 Satellite phones have so far been inducted, 20 more are likely to be inducted for use by stranded piligrims. Army also opened three helpline centres each at Haridwar and Rishikesh to serve as information kiosks to people.

Army is presently carrying out reconnaissance to examine the feasibility of making a larger helipad at Gagaria on Hemkund Sahib axis so that large number of people can be evacuated using MI-17 helicopter. Efforts are presently underway to repair the bridge over Alaknanda between Govindghat and Ghagria on Hemkund Sahib road. Six Army columns are also currentlly deployed for rescue & relief operations in Pilibhit, Muzaffarnagar, Laksar and Amroha in Uttar Pradesh.


Two other columns have since returned from Saharanpur and Bijnor districts after evacuating 98 people and construction of anti flood bund. 114 people have been evacuated so far from Pilibhit district.
Click to expand...

FLOOD RELIEF BY ARMY IN DAULATPUR AND SAHARANPUR AREA, UP
Click to expand...

FLOOD RELIEF BY ARMY IN DAULATPUR AND SAHARANPUR AREA, UP
Click to expand...

On 16 Jun heavy rains wreaked havoc in the hill states of Uttarakhandand Himachal Pradesh leaving thousands stranded including pilgrims in transit in various valleys. IAF assistance was sought for rescue operations. HQ Western Air Command(WAC) promptly responded to the requests from various states for providing flood relief. IAF undertook the task simultaneously in the sectors of Yamunanagar, Kedarnath-Badrinath axis, Rudrapyag valley, Karcham- Puh axis.
Airforce station Sarsawa was made the hub centre with helicopters converging from Bhatinda and Hindon. A number of Medium lift helicopters including the newly inducted MI -17 V5 were positioned on 17 Jun at Jollygrant helipad at Dehradun despite inclement weather. On 17 Jun a total of 36 pax were evacuated from general area Karnal by MI -17 V5. In addition 21 passengers including 15 children were rescued from Nakud by ALH operating Ex Sarsawa.
On 18 Jun two additional MI -17 V5 helicopters were put into service along with the NDRF teams in the general area of Rampur- Rekongpeo in Himachal Pradesh. The relief operations are in full swing providing succor to thousand of standed pilgrims and tourists.

Following incessant rainfall and flash floods in various regions of Uttarakhand, Army has been providing continuous humanitarian aid to thousands of pilgrims in the last 36 hours. Army assistance centres have been established at Harsil, Uttarkashi, Rudraprayag, Joshimath, Govindghat, Hanuman Chetti and Dharchula in the last 24 hours to provide information, medical aid, food and water to stranded and hungry pilgrims.

Army provided succor to paramilitary personnel at Sela in Pithoragarh district and detachment of mules at Gauri Kund near Kedarnath. Eight Quick Reaction Medical teams have established medical aid posts at Rudraprayag, Joshimath, Govindghat and Dharchula to provide immediate life saving medical assistance. Besides, stranded pilgrims are being given expert and specialist medical advice on telephone via virtual network through Medical Emergency Helpline.

Hundreds of pilgrims have been evacuated by the Army on foot from Govind Ghat to Joshimath this morning. Further evacuation got disrupted due to extensive landslide in the area. Food, medical aid and shelter have been provided to hundreds of stranded pilgrims in the area.

Army has also launched a dozen reconnaissance parties to inaccessible areas to obtain first hand information. Five columns are already in location to provide assistance on ground. Ten columns have been kept stand by to move at short notice to flood affected areas. Army mobilized these columns without waiting for any request from civil administration.
Click to expand...

salute to Indian army. bravest of brave ,touching the sky 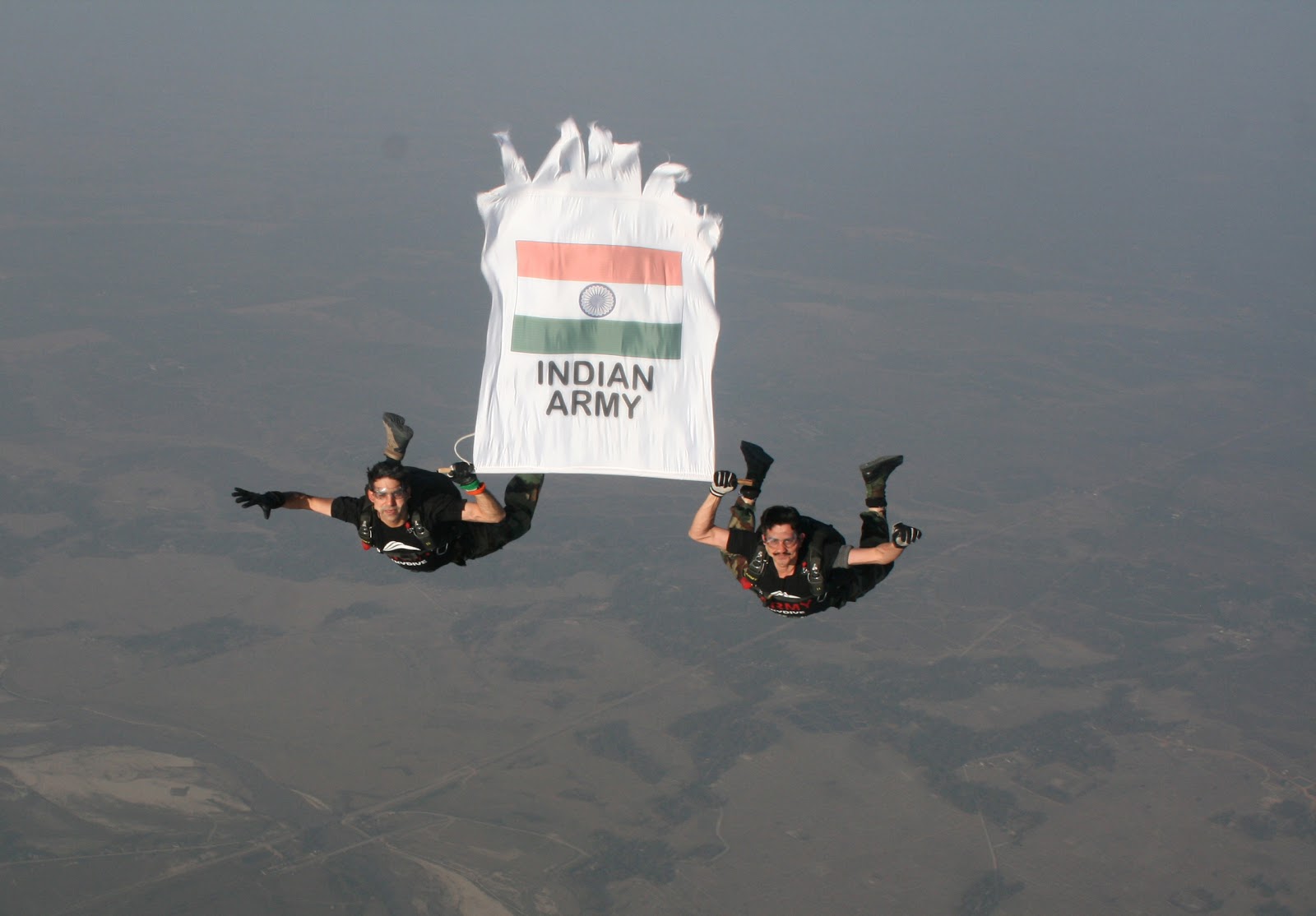 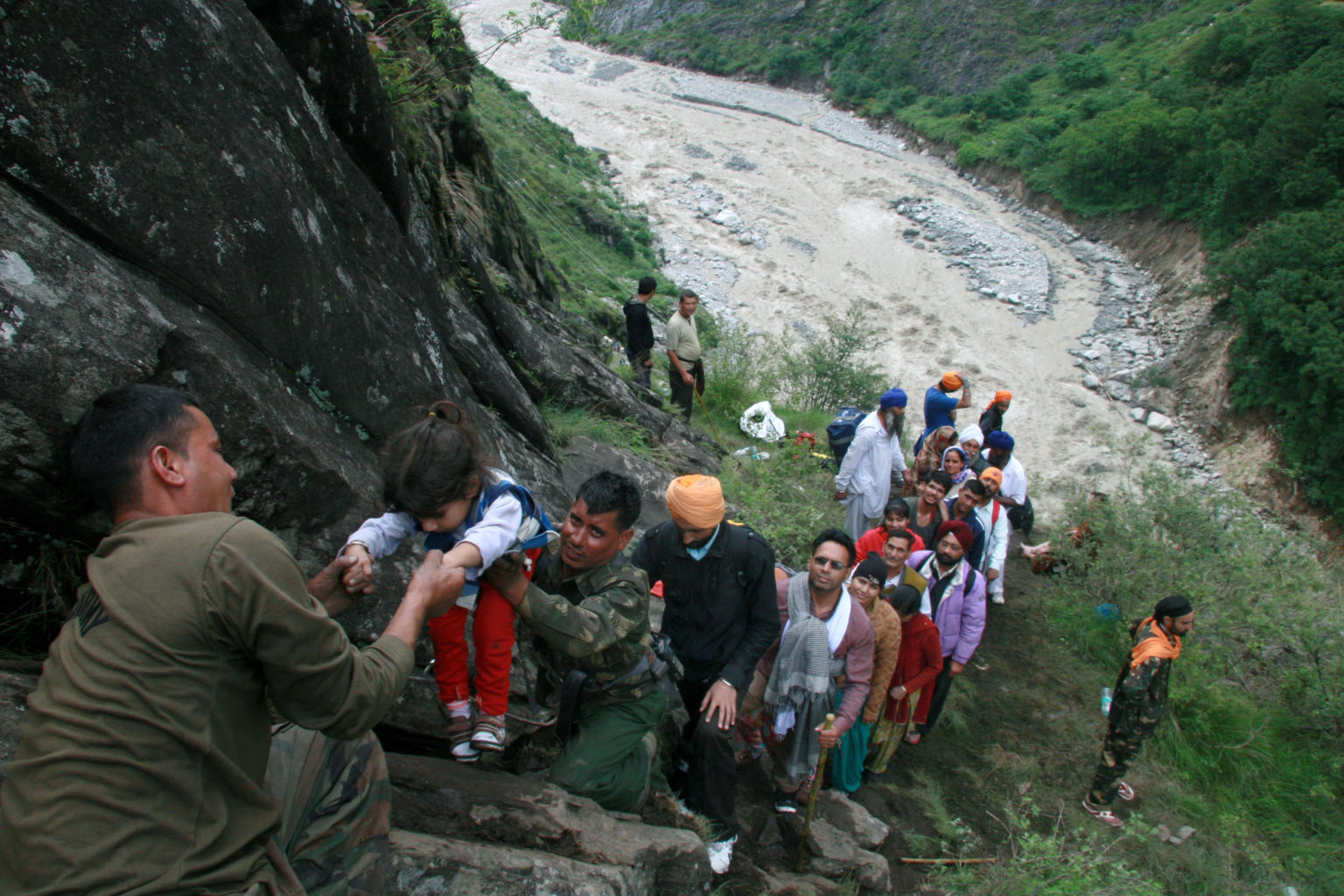 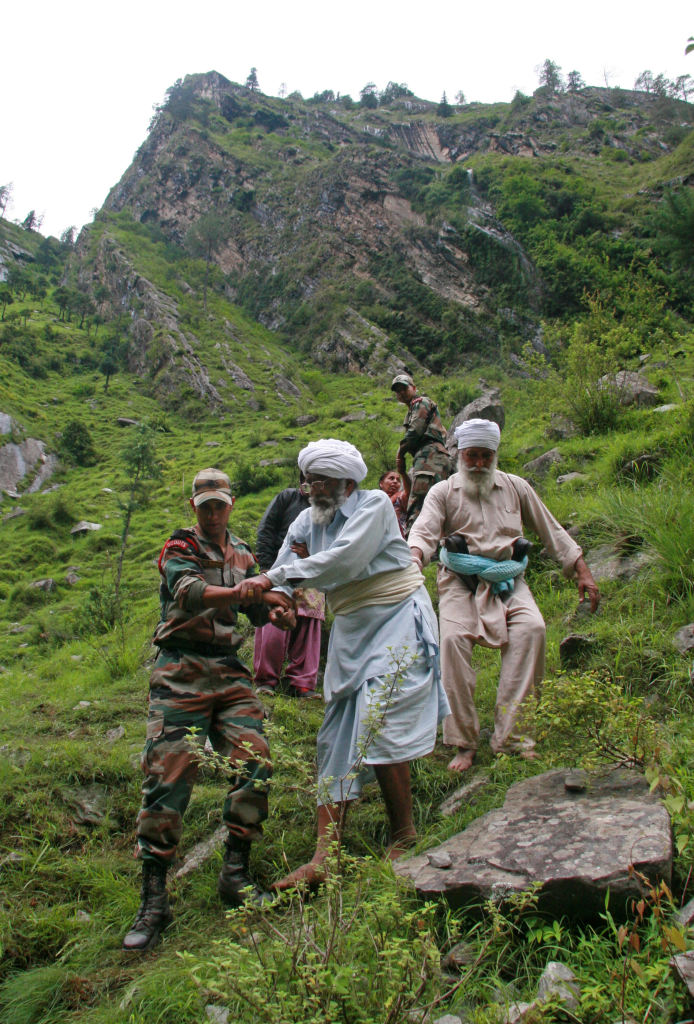 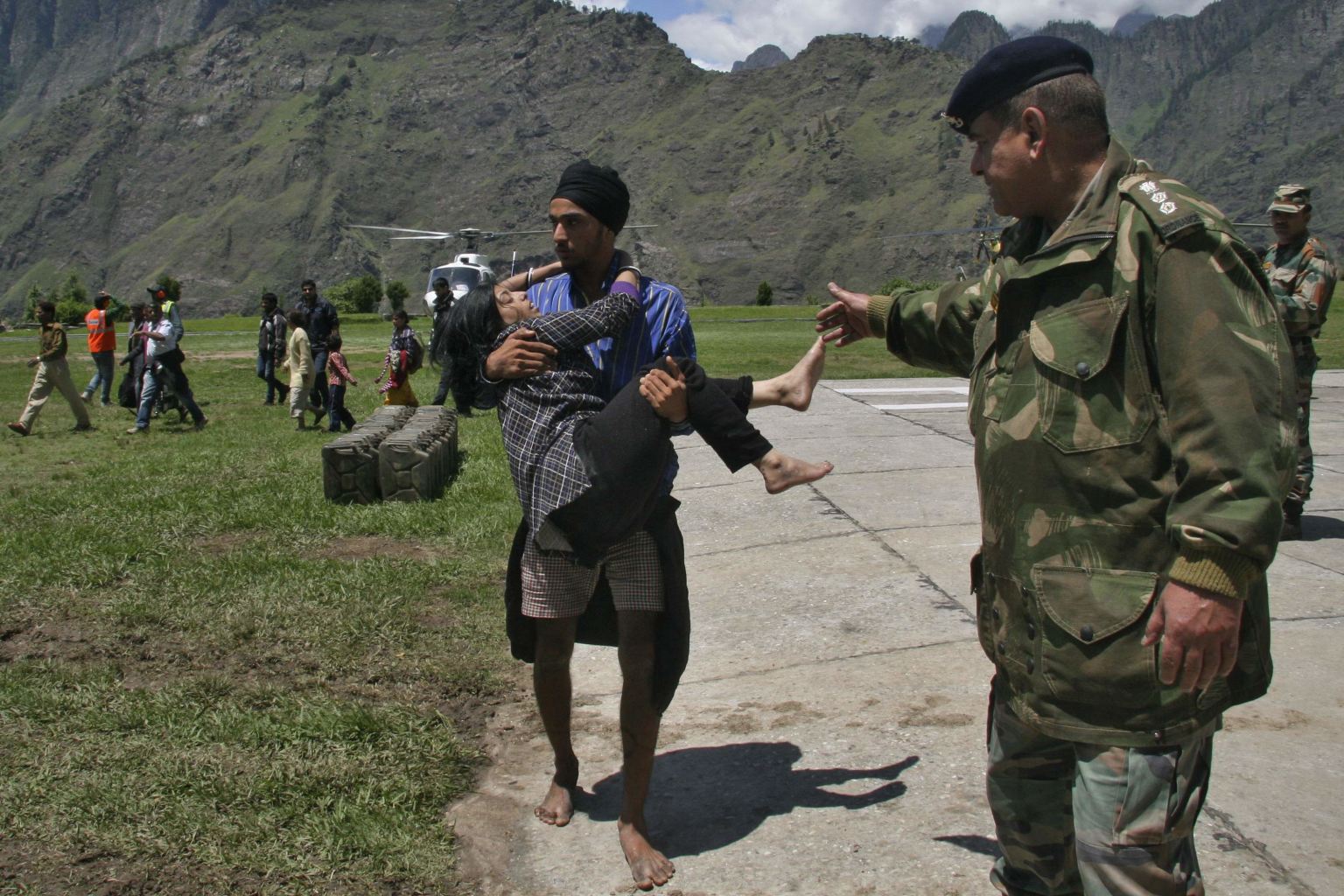 Great Indian Army ,Service before Self

Having seen most of the pictures and footage , I say :

Army today opened the all important road link from Sonprayag to Gauri Kund which is the base camp for trek to Kedarnath. Approximately 1000 people stranded at Gauri Kund are now being evacuated along the newly opened road to Sonprayag and Tehri.

Army Para troopers with specialized mountaineering equipment reached out to people stuck in various gorges, ravines and nallas between Gauri Kund and Ram Bara this morning. 70 men are now carrying out search operations in Ram Bara area which was washed away by floods. In a daring act, Army Aviation pilots landed a special force at Jungle Chatti near Ram Bara and rescued 16 people from the river bed.

In the Joshimath sector, Army constructed a temporary bridge across Alaknanda River near Govind Ghat to facilitate stranded Hemkund Sahib pilgrims to cross over. Similarly two land slides between Govind Ghat and Gagariya have been cleared paving the way for pilgrims to move by foot. 500 people have been evacuated so far. Army teams reached Badrinath and Ghagriya today and 91 people were evacuated today by Army helicopters.

Army teams last night reached Gangotri for the first time since the floods. Approximately 500 people in Gangotri are now in the process of being evacuated to Harsil. Army camp at Harsil provided shelter, food and medical aid to 1500 people.

Some of them have since been evacuated by helicopters from Harsil. Army today air lifted 3.6 tons of food to Harsil today. Road Rishikesh – Gangotri has been opened upto Uttarkashi; road between Uttarkashi to Harsil is still not open to traffic due to land slides at number of places. This 74 Km stretch will be the focus of Army's attention from tomorrow.

In Pithoragarh district, eight stranded civilians were evacuated by Army helicopter from Milam today. A medical camp was established at Tijam providing medical aid to people affected by floods. 65 patients were treated by Army Medical team at Gothi in Pithoragarh district. 160 civilians were evacuated from inundated areas and moved to upper reaches and were given first air, food and shelter.

Army team has been heli landed 12 Kms inside Pindari glacier in Bageshwar district of Kumaon region of Uttarakhand to link up and evacuate 50 people stranded on the glacier.

Four flood relief columns of Army are assisting civil administration in evacuating people from flood affected areas of Pilibhit, Laksar, Mawana and parts of East Delhi. 1354 people have so far been evacuated from Pilibhit alone.
—