India withdraws Bofors graft case : BBC​
India has dropped a graft case against an Italian businessman accused over an arms scandal which ended Rajiv Gandhi's prime ministership 20 years ago. The government told the Supreme Court the case against Ottavio Quattrocchi was being withdrawn. The opposition BJP condemned the decision, it said the government was shielding the Italian businessman. 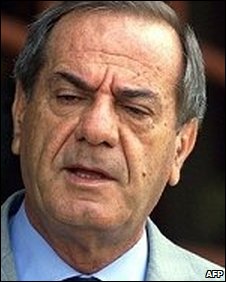 Mr Quattrocchi has always maintained his innocence​
He was accused in the Bofors corruption case. In April India withdrew his name from the Interpol "wanted list". "The central government has consented for withdrawal of the prosecution of Quattrocchi," Solicitor General Gopal Subramanium told a Supreme Court bench headed by Chief Justice KG Balakrishnan. "We have to take a call on the matter and the government has taken a call after considering all aspects," he said.

Mr Subramanium said India's top investigating agency, the CBI, had taken the decision to close the case by also taking into account the Delhi high court judgement of 2004 which had held that no case of corruption was made out in the Bofors deal.

'Condemnable'
The opposition BJP has criticised the government for dropping the case against Mr Quattrocchi. "Every attempt has been made by the government to shield him, which is highly condemnable and is a blot on the face of this government," BJP spokesperson Ravi Shankar Prasad said. 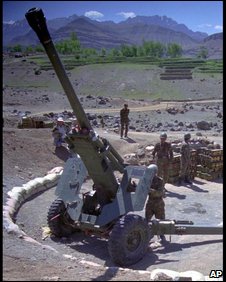 Illegal commissions were allegedly paid on the Bofors guns.​

The Bofors case has been one of the highest-profile and longest-running criminal investigations in India. It involved the Swedish firm AB Bofors, which was alleged to have paid $1.3bn in bribes over the sale of 400 howitzers to India in 1986, when Rajiv Gandhi was prime minister. The Bofors issue is extremely sensitive politically for the governing Congress party as Mr Quattrocchi was known to be a friend of party leader Mrs Sonia Gandhi, who is Italian-born. Mr Quattrocchi was allegedly the intermediary in the Bofors deal and received $7m in bribes and other illegal payments.

Indian investigators have tried unsuccessfully for much of the past decade to get Mr Quattrocchi extradited to India. The Italian businessman has always denied any involvement, arguing he was the victim of a political vendetta in India. The case contributed to the election defeat of Rajiv Gandhi in 1989, two years before he was assassinated. In 2004, he was posthumously cleared of any wrongdoing in the deal.

If any system that cant complete a trial within two decades, they have no right to continue with it.
I dont know whether Govt has done right or wrong but it shows the inefficiency of our legal system. Opposition parties, BJP or third front should explain what they did during their tenure to complete the trials.

gone is gone leave it.
Bofors gun have done good job in kargil war ,
atleast try to modrenize what we have.

It's a pity you know...cuz bofors are the best guns out there. The Army desperately need new howitzers but these politicians just won't budge. On a lighter note I think the army will have to go on a hunger strike in order to finally get their guns

It is a dead issue.Since no concrete case has been against Quattrocchi and and since the CBI has been unable to furnish evidence and has been consistently to extradite him from Malaysia and Argentina there is no point in pointlessly harassing the man. The realistically it from the way this case has been handles it will save us from a whole lot of embarrassment

sabir said:
If any system that cant complete a trial within two decades, they have no right to continue with it.
I dont know whether Govt has done right or wrong but it shows the inefficiency of our legal system. Opposition parties, BJP or third front should explain what they did during their tenure to complete the trials.
Click to expand...

our whole legal system was based on old British legal system.
when we got freedom all our Gandhi family and Nehru family and others who created constitution were mostly educated in England, so they felt it was right to follow same of British , but later some where 1950-60 British upgrade their legal system to this modern society, then some lazy babus felt its noting wrong with our legal system and had many loop holes to escape any trials so they left it as of now it was.
G

1.44 said:
It is a dead issue.Since no concrete case has been against Quattrocchi and and since the CBI has been unable to furnish evidence and has been consistently to extradite him from Malaysia and Argentina there is no point in pointlessly harassing the man. The realistically it from the way this case has been handles it will save us from a whole lot of embarrassment
Click to expand...

I disagree its not a dead issue only thing is India did not get enough proof to extradite him to India. With lot of politics involved. Even NDA government could not get him.

But withdrawing case is too much first of all why does he not attend the trial and clear himself.

He has close ties with Gandhi family.

One thing is for sure even though Bofors gun beat the competition and proved itself again it will not be bought by Indian army so as not to open can of worms.

Can anyone explain while every Govt. tried to bring the "Middle Man" Ottavio Quattrocchi to justice, why I never heared that any "front man" at receiving end were charged? Granted, Rajeev Gandhi paid the price in election. But obviously he was not ONLY person involved. There gotta be quite a good number of Defence ministry and Army staff involved in this. Were there any such indictment you know of? If you do, kindly enlighten me.

It is without any doubt that the Royal family did what they could for Quattrocchi, how else only after the Congress came on to power that the such burning evidences that got Quattrocchi's accounts freezed in UK, suddenly lost all importance? But the fact stands that however long this fiasco may go on, nobody's gonna get any more than a slap on the wrist. After all our Royalty's name is involved in it too. After all every pragmatic soul in the country knows that our judicial system and Law Enforcement services are only meant for common people, not royalties like them - including all the political and business families. So, why hurt our army for in the futile process?? It seems every company that bids for Indian artillery system is a suspect - Soltam, Singapore's ST kinetics - all of them.

Bofors is still one of the premier weapons maker and Bofors guns did serve quite good in Kargil war.
You must log in or register to reply here.
Similar threads
India may withdraw MFN Status from Pakistan amid Tensions
India Takes First Step Towards Indus Water Treaty Withdrawal
US withdrawal from Afghanistan: what it means for India
Sartaj Aziz urges India to withdraw its forces from Siachen Glacier
Share:
Facebook Twitter Reddit WhatsApp Link