India up 16 spots to 55th in global competitiveness

India has jumped 16 places on the Global Competitiveness Index, according to the latest rankings released by the World Economic Forum (WEF) on Tuesday. It now ranks 55th among 140 countries, against 71st in 2014-15. But, despite this massive jump, which follows five years of a decline on the list, India still ranks seven notches lower than it did in 2007.

Switzerland tops the latest rankings, followed by Singapore, the US, Germany and Netherlands.

The WEF report attributes the jump in India's ranking "to the momentum initiated by the election of Narendra Modi, whose pro-business, pro-growth, and anti-corruption stance has improved the business community's sentiment towards the government". The report, however, says if a constant sample of 135 countries is considered for both 2014-15 and 2015-16, India's ranking would remain unchanged at 55th. 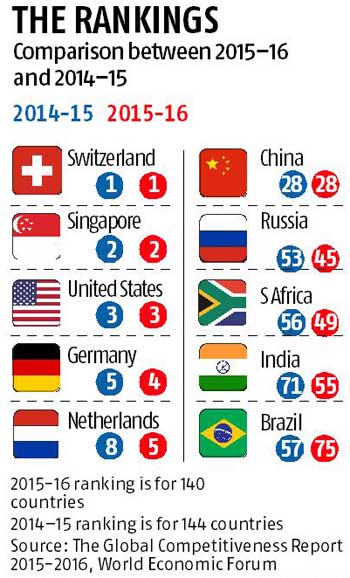 The latest WEF rankings show India's institutions are now "judged more favourably" (ranked 60th against 70th in 2014-15). The report says in terms of trust in politicians, India ranks 31st, while on favouritism in the decisions of government officials and burden of government regulations, it ranks 32nd and 27th, respectively.


A big improvement was seen in the country's macroeconomic stability through the past year, with its ranking jumping 10 places to 91st in 2015-16. Part of this could reflect the recent moderation in inflation, the fall in the current account deficit and steps taken by the government to control its fiscal deficit.

The WEF report is rife with anomalies. Health and primary education is seen as an area of improvement, with India's ranking jumping 14 places. This is surprising, as on one of the indicators - quality of primary education - it ranks 52nd, which is at odds with various surveys such as the Annual Status of Education Report that show how poorly the country fares in this regard.

Another surprise is India ranks 25th on hiring-and-firing practices in the labour market, a sharp contrast to public discourse in India that sees restrictive labour laws as thwarting growth in the manufacturing sector.

The report lists corruption, policy instability, inflation, access to financing, government instability and inadequate supply of infrastructure as the top concerns in terms of doing business in India. 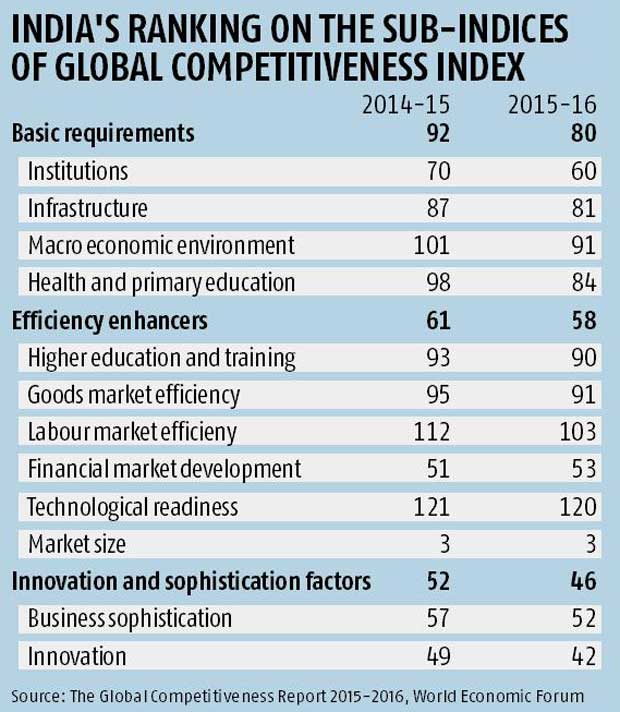 Good improvement but still a long way to go !

http://www.business-standard.com/ar...in-global-competitiveness-115093000072_1.html
You must log in or register to reply here.
Similar threads
Xiaomi beats Samsung to top spot in India’s smartphone market
US is India's top arms supplier; France to fly into the spot this year
India climbs 12 spots to rank 130 in World Bank's ease of doing business report
India moves to 3rd spot in most billionaires, after US and China.
Share:
Facebook Twitter Reddit WhatsApp Link