The goal is to remove common misconceptions about our current status in various sectors and in the world in general. So that member are armed with latest data about India while debating either here or in social media.

Since data is always subject to interpretation hence this threat will use nuetral methods of data interpretation and won't just rely on western methods.

I will write regular posts here in my free time . Other members can contribute too with fact /data based posts. I will have to see how thread authorization will work.

Looking forward to an enriched thread.

Since it will be purely a factual thread ( I will keep politics / prejudice out of it as much as possible)
I request moderators to make it sticky so that all members can access to it faster.

So which is more relevant for India.

It is gdp ppp because gdp nominal directly converts all India production ( goods and services ) directly to us dollars as exchange rate without adjustment.

It makes sense for economies who are primarily trade driven . But India is mostly driven by internal consumption hence ppp makes more sense.

You can see it in various other metrics too.

For example India is smaller then Japan in gdp nominal but twice as large in ppp numbers.

India lays down 10000km of highway while japans entire highway network is 55000km only.
( Expressway are different )

We build as much highway as Japan every 6-7 years now.

Similar for our production of food grain and consumer goods.

Only ppp measure can justify these difference in economic productivity between India and Japan hence ppp is more accurate .

Now we will take a look at Indian defense budget .
We keep hearing it's just 71 billion accordingly to sipri which is 2.4 % of gdp .

But if we look at ppp Indian defense budget is 2.4% of 11.3 trillion dollars which is 271 billion in international ppp dollars.

Now usual argument is that we import most of military equipment from abroad and hence defense budget should be seen in exchange rate terms and not ppp.

But this view is utterly ridiculous and flawed.

For all our defense imports ( everything jets , spares parts , ammunition , parts , training etc) . All of the spending on imports is paid our years and not at one go. For example rafale deal. On paper it is 8 billion usd gone . But that is divides over multiple years and by offset 30-50 % money is invested back into India in different deals.

How how does our annual defense import looks .

en.m.wikipedia.org
According to this Indian defense import from 2000 to 2016 was total 42 billion usd over 16 years.

Which means import of 2.5 billion usd per year.

Now our imports are declining and toady's reforms means even less import in future.

So even at peak if we pay 5-6 billion usd for imports it doesn't make sense to see entire defense budget in nominal dollars.

So even if this year we pay 5 billion usd to import then 71-5 =66 billion should still be seen in ppp which is almost 250 billion usd approx.

It is also visible by comparing India armed forced with france which has almost Similar defense budget at exchange rate
And yet India maintains a much bigger army with far more equipment.

French army has 117000 solder India has 1.4 million.
France has 220 tanks India has 4000+
Same for artillery and other equipment.
France air Force has 250 jets India has 700.
Indian Navy is already bigger than France and
Is building at much much faster rate than France.

All of this can only be explained if we look defense budget in ppp and not in nominal exchange rate terms.

Hence the accurately our defense budget is 250+ billion usd.

Which explains why we can run all there programs simultaneously from ssbn , ssn to lca , mwf and amca and many many more.

Those who want to add their contribution to this thread can pm me I will add them as collaborator's.

It is often said India has less uranium and is dependent on imports. Which is not true since recent Discovery of huge uranium deposits in Andhra and elsewhere .

While India needs a stock of only 15000 tons to secure it's nuclear power supply.

So we can actually ramp our nuclear weapons inventory by thousands by our own domestic uranium resources. We can build and maintain as many nuclear warheads as USA and Russia.

Now about the cost of mining and maintaining thousands of warheads.

Well Russia does that which has an economy half the size of India in nominal gdp and one third of India in gdp (ppp) . So no reason why India can't maintain thousands of warheads if Russia can do it.

That's another myth busted about potential of Indian nuke warheads.

It's often believed that china builds roads much faster than India because of authoritarian govt in china which controls all land.

But Indian democracy has started to catch up in highway construction speed now. That too without violation of any property rights.

China now has over 130,000 kilometers of highways nationwide, according to an official census on the country’s expressways. That’s enough to go around the globe more than three times.
english.www.gov.cn

Every year since 2011, another 10,000 kilometers has been added to the network. And China now has the world’s largest highway system 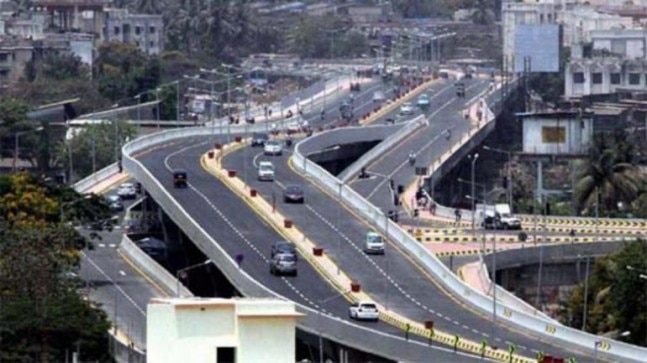 Highway construction rate in India on the right track, more than doubles in five years

So as you can see since 2018-19 India is matching Chinese highway construction speed. And now with many state government preparing land pools this speed can go even higher.

Next time someone says china is faster because of total govt control . Show this post and remind them that democracy can be just as fast.

People often say will India catch up to china in manufacturing? There is no correct answer but take a look at growth of Indian manufacturing in data.

Manufacturing refers to industries belonging to ISIC divisions 15-37. Value added is the net output of a sector after adding up all outputs and subtracting intermediate inputs. It is calculated without making deductions for depreciation of fabricated assets or depletion and degradation of...

In 1991 year of opening of Indian economy we had manufacturing output of 42 billion.

Since 2014 make in India program Indian manufacturing output has grown almost 25 billion dollars annually from 307 billion usd in 2014 to 408 billion annually in 2018.

Going back to our rate of tripling manufacturing output in 14 years ( which we have done twice already). Our manufacturing output could easily be 1.2 trillions by 2032. Which is on par with USA output today . ( Including inflation output figure would look much bigger ) .

We are already 6 th largest manufacturing centre in world just behind South Korea ( might take them over soon) so we already have a robust base to grow even faster.

China has 400 billion usd in manufacturing output somewhere in 2002-2005. In 20 years they grew 10 times. We can grow 5-6 times from this base if we take advantage of current opportunities.

India vs china growth in data.

To have a fair comparison of growth of modern economies of India and China one must start from points of their major economic reform years which triggered faster growth for these countries.

For china reforms started in 1978 while for India they started in 1991.
( Reason for this delay can be tracked to historical political landscape and not germane for this post).

So India had already lost 13 years of reformed growth when it started in 1991.

But since then India has grown almost as fast as China despite being a democracy .

Data does support this.

We will look at comparison in gdp PPP as that is more accurate given nature of Indian and Chinese economies.

Here is historical gdp of china. 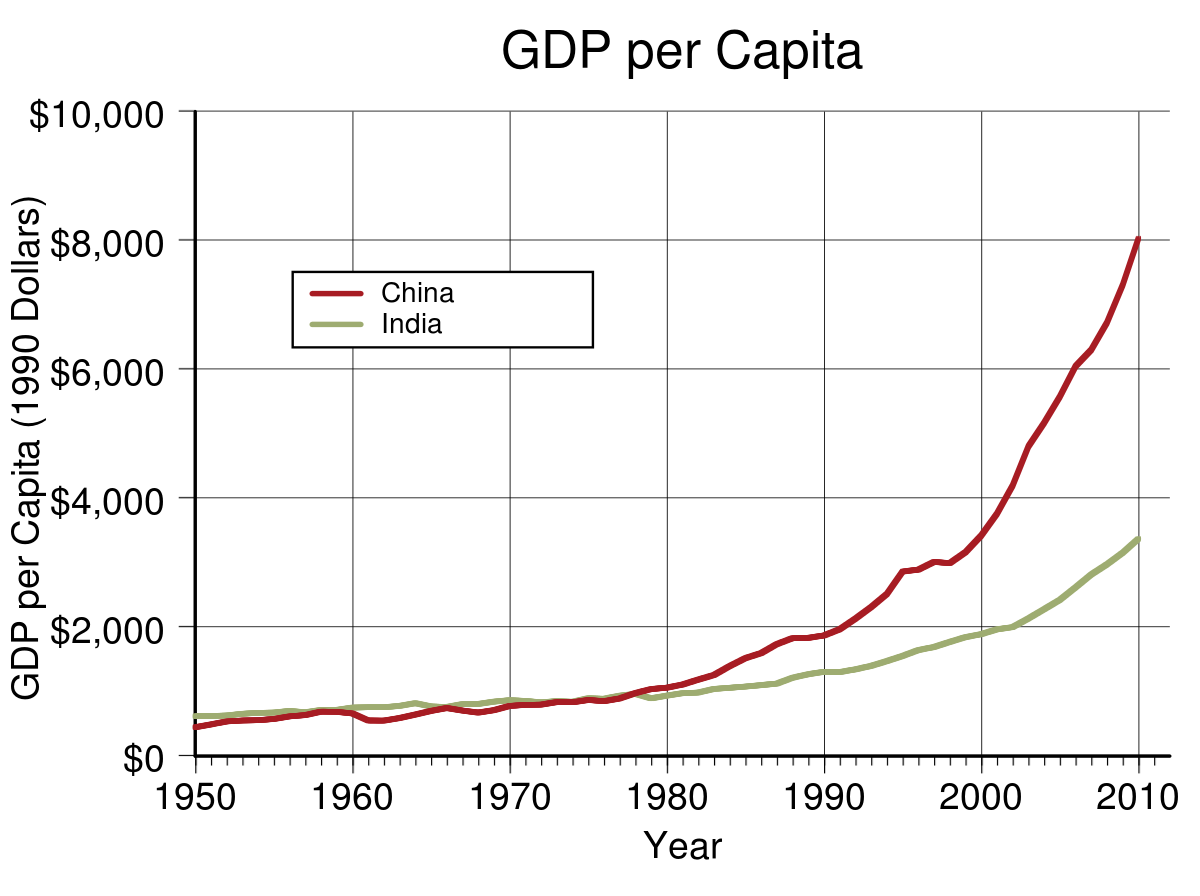 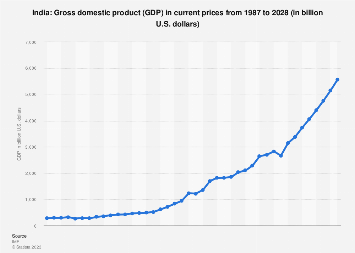 As we can see India is 11 years behind china in gdp size.

Same goes for gdp per capita. Indians have reached similar income level per capita as Chinese enjoyed in 2009-10.

So wealth wise and growth wise ( quality of life) India has reached same standards as China in 2009-10.

And now India growth is outpacing china . As Chinese population is slowing down and Indian rising.

Chinese growth since 2010 is mostly within 6-7% range and yet it grew from 11 trillion to 27 trillions in 10 years because of large base.

So India can too reach similar level in next 10 years with 6-7% gdp growth.

As China slows down and India pics pace this historic anamoly would be corrected over next two or three decades .

Can India replace Chinese import and compete with china globally.

Yes of course ! Let's understand this .

Chinese product is not a single entity. They are multiple layers.

All these things are directly replaceable . There is no complex tech involved just scale is needed.

Then there is middle layer of more complex products like smart phones , ac and household equipment , tv , electric bikes etc.
We are already forcing equipment maker to assemble in India and now components are being manufactured with here. We can slowly bring whole ecosystem here. Even if then product is Chinese most of value addition will happen in India.

Most difficult is bigger equipment like 4g/5g kits , solar panels , construction machinery . It will require massive investment to replace them but they make up very less portion of Indian imports. Most are small things.

Our aim should be to have layered action.
Ban small things from china outright like cables , toys , phone accessories.

Second force components to be build here and Never import a finished product . Even for machinery etc.

Chinese succeeded because they utilized their scale.
We need to repeat this .

Two wheeler motorcycle are not small product. ( Much bigger and costly than smartphone , tv , fridge etc.) And yet we can build and beat china there.

How is that possible because govt protect automobile industry and allowed it to scale up to our potential..

That's why our automobile manufacturing hasn't been replaced by Chinese.

We need to repeat this model for textile , toys and consumer goods as well as electronic equipment.

We are sixth largest manufacturer of the world since 2018 ( almost equal to South Korea).

If we can build all those things why can't we build the small items we keep importing from china.

Time is now to protect domestic electronics industry from china ( not anybody else so no lack of competition from USA Japan and Europe).
And allow them to scale just like examples above.
You must log in or register to reply here.
Similar threads
Anchor Shahzad Iqbal exposed the real face of India with facts and figures.
PM Modi Israel visit: India to soon get Heron TP armed drones; check images, facts and importance
India’s Position On Tibet Is A Self-Serving Betrayal Of The Facts
11 Unknown Facts About The India's Research And Analysis Wing (RAW)
Share:
Facebook Twitter Reddit WhatsApp Link