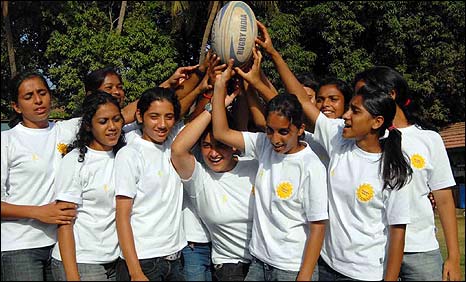 The team's coach believes the players are destined for great things


May 29, 2009: India's first women's rugby team is preparing to take part in an international tournament. At their first press conference, the players are curious and amused with all the media attention, but also excited about leaving for Thailand.

Sangeeta Minz smiles shyly if you ask her about how she started playing. It's been only a month since she played her first game and she has already made it to India's first women's rugby team.

Sangeeta, 20, is a kabaddi (a South Asian team sport) player from Bhubaneshwar, Orissa, and is thrilled about her selection to represent India at the Asian Women's Rugby Sevens tournament to be held in Thailand on 30 and 31 May.

Rugby India, the organisation that promotes the sport in the country, recently held a national competition to find talent for the tournament.

They picked a 13-member squad to represent India from the 16 teams that participated.
"First the Indian men's team participated in an international competition in 1998," said Aga Hussain, vice-president of Rugby India.

"It is after 11 years that the first Indian women's team is doing likewise. It is a very important day for us."

Apart from India, 13 other teams from countries including China, Singapore, Iran, Cambodia and Malaysia will take part.

Mr Hussain said that players had come from as far away as the states of Jammu and Kashmir and Kerala.

He said that after this tournament, women's rugby would start rolling and more players will participate next year.

Many of the 13 players selected - including captain Avani Sabade - are from Pune, the IT capital of Maharashtra state, where several schools encourage rugby.

"Some of my teammates have played rugby only for a few months, some have played for a few years. We will give it our best and try to win in our pool at least."

Sangeeta and Jashobani Pradhan are the only two players not from Pune. Sangeeta said that her family, who live far from Bhubaneshwar, are yet to see a rugby match.

"I didn't even tell them exactly what rugby is," she said.

"As a game, I feel kabaddi is more rough and violent than rugby but in rugby you have to run across the field. You need a lot of stamina."

Many players may not have played rugby for long but have represented their state or school in sports like boxing, wrestling and kabaddi. They hope to draw skills from the other sports they play and apply them to rugby. 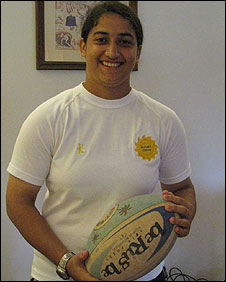 " It is like wrestling while running... I use my
strength only if someone comes in my way "
- Vahbiz Barucha​

"I prefer team games to solo ones. I was getting bored with wrestling and I have attended national camp for handball. Rugby is good. I use my strength only if someone comes in my way. I don't like to see anyone hurt. This is better than wrestling."

Vahbiz's father, Boman Barucha, is not perturbed when asked if rugby is a rather unusual game for girls in India.

"I feel it is only through sports that one learns discipline and caring for others," he said.
"She is a very hard-working and conscientious girl. We as a family are very proud. It is very difficult even to go on holidays as she doesn't want to leave the sports ground."

The team's coach, Usaia Buimuiwai, is from Fiji. He says the standard of their game will go up as they play more tournaments.

"Before long our female Team India could be winning more often than their male counterparts in cricket," he jokes.