IAF and the PAK atlantique

IAF Scores a Kill - the actual story!!! On 10 Aug 99 at 10:51 hrs IST an IAF ground radar picked up an aircraft track inside Sind region of Pakistan near Badin, approaching the Indo-Pakistan international border (IB) on a South-Easterly course. The track was moving at a speed of 370 kmph maintaining a height of 3000-3500 feet. It first touched the international border (at point 68 degree 48 min E, 24 degrees 18 min North) at 10:54 hrs. For the next 17-18 minutes it carried out a series of maneuvers over this area. (In this process, the track stayed within or close to 10 km of the boundary. The '91 air agreement between India and Pakistan requires all aircraft (other than helicopters) of the two countries to maintain a minimum distance of 10 kms from the border; on two occasions the PN Atlantique actually violated Indian airspace at these two points). Two MiG-21 fighter interceptors which were on operational readiness at the IAF base at Naliya in Kutch, were brought to a higher state of scramble alert as the track approached the IB. When the track crossed the international border the first time at approximately 10:57 hrs, both the interceptors were scrambled, getting airborne at 10:59 hrs. <P> The fighter controller of the ground radar vectored the fighters in a Northerly direction, to bring them in the general area at approximately 11:10 hrs. By 11:12 hrs, the bogey (unidentified Pakistani track) proceeded initially West, subsequently turning and heading South till the IB (at point (68 degrees 32 min East, 23 degrees 58 min North), then turning onto a Westerly heading initially. At this time, the IAF interceptors were also directed Southwards by the radar controller and generally kept abreast of the bogey, keeping on the Indian side of the IB. The bogey turned South once again and entered Indian airspace for the third time at approximately 11:14 hrs and penetrated 10 km into Indian territory before turning on an easterly heading. At this stage, the fighter controller maneuvered the IAF MiG-21s so as to place the leader between the border and the intruder (to stop the intruder from escaping) and the wingman was accelerated and brought behind the unknown intruder from the other side in a pincer movement. The leader made radar contact between 10-15 km range with the intruder. Both interceptors visually sighted the interceptor and identified it as an Atlantique of the Pakistani Navy. The leader closed in to 300 meters of the Atlantique, on his left, intending to formate on him and signal him visually and, if possible, communicate with him on radio to direct him to land at the nearest IAF base. By now, of course, both interceptors had not only identified the intruder as an Atlantique but visually seen its identification markings. <P> As the leader of the interceptors was jockeying into position, the Atlantique turned into him in an aggressive evasive attempt. This was a hostile act. As per international norms he ought to have maintained his course and height and in fact lowered his under-carriage as a sign of submission as per the Rules of Engagement. The Atlantique had earlier been declared hostile after it had been identified, as the Atlantique falls into the category of "hostile" as per established procedure. A hostile aircraft does not have the option to return home; he has only two options - follow instructions to forceland at an IAF base, or be shot down. When the intruder turned into the leader in an obvious attempt to throw the interceptor off balance and make a dash for the border, on clearance from the fighter controller the lead interceptor maneuvered his fighter and for a missile launch on the PN Atlantique to prevent him escaping. <P> On being cleared to fire by the ground radar, the leader fired an R-60 air-to-air infra-read heat-seeking missile at the Atlantique. The missile hit the intruder on the left engine which immediately caught fire and started smoking. This happened at approximately 11:17 hrs when the Atlantique was still 5 Km South of the IB on the Indian side. <P> The interceptors were immediately ordered to break away to right to ensure that they stayed within Indian territory. <P> The Atlantique after being shot continued to be seen on IAF ground radars. It entered a loose descending spiral turn to the left, burning fiercely with wreckage falling off; in the process, it described an arc 5 kms within Pakistani territory before facing an approximately South-Easterly direction again close to the IB before it disappeared from the IAF ground radar screen. <P> The behavior of the intruder while it was deliberately operating for<BR>approximately 18 minutes in the earlier part of the sortie had confirmed that it was neither lost nor violating the border inadvertently. The possibility of it being on a training mission is ruled out beyond all doubt by the profile it followed. <P> The relevant fact is that the PN Atlantic was military combat aircraftclassified as 'hostile' deliberately violating Indian airspace on an operational mission. In such a situation, the Rules of Engagement dictate the shooting down of the aircraft after clearance from the controlling radar. In actual fact, the lead IAF interceptor approached it from the front quarters, showing himself plainly and was intending to formate on the Atlantique to be able to communicate with him and get him to land at an Indian airfield. The PN Atlantique did not respond to this, his last option for survival, but instead acted in a hostile manner by turning aggressively into the IAF interceptor. There was no alternative thereafter but to shoot down the Pakistani intruder to prevent it from running away after being caught while on an obvious illegal operational mission in Indian territory. <P> In the final analysis, the bottom line is..... the IAF acted in a thoroughly professional manner as per the existing Rules of Engagement, even going so far as to give the intruder a chance for survival which was rejected. The IAF continues to maintain its high state of vigilance and is confident in dealing with any future intrusions is an equally firm manner.
A 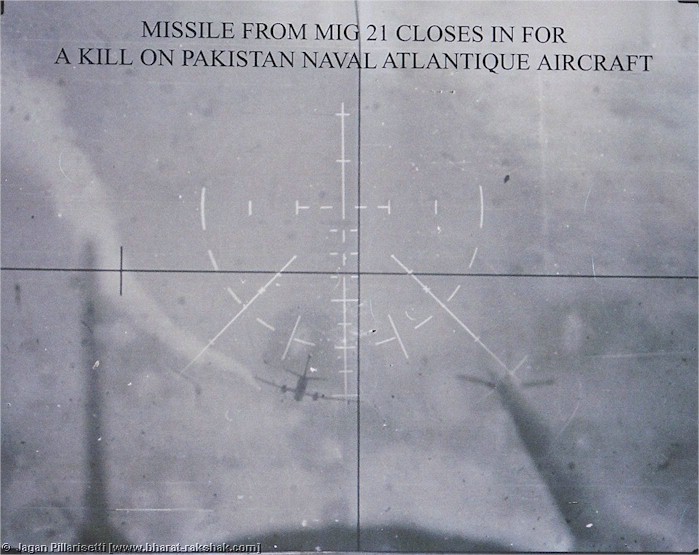 HUD camera photo from the MiG-21 that shot down an intruding Pakistan Navy reconnaissance plane. The missile is seen rushing to the port engine of the Atlantique.Courtsey Bharat Rakshak 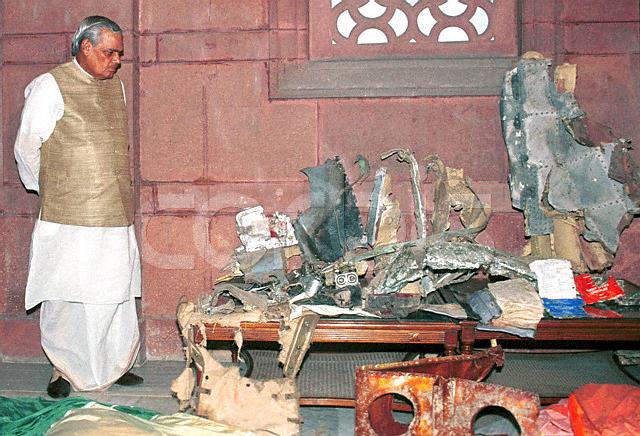 Indian Prime Minister Atal Behari Vajpayee views the wreckage of the Pakistani naval aircraft at his New Delhi office on August 11. India said the plane was shot down on August 10 after it intruded into its territory and refused to respond to Indian warnings near the border in Gujarat state. The wreckage was flown to the Indian capital early morning.

A composite map showing the flight paths of the intruder(Atlantique) and the intercepting aircraft. This was released by the Indian Air Force.

A MiG-21Bis of No.45 Squadron makes a low level pass near a Light house on the Gujarat Coast. No.45 Squadron intercepted the Pak Navy Altantique that violated Indian Air Space.
A

Sqn Ldr P.K. Bundela (left) of No.45 Squadron and Fg. Off. S. Narayanan (right) at a press conference after the incident. Sqn. Ldr. Bundela fired the R-60 missile that downed the Atlantique.

Wreckage of the Atlantique in Pakistani territory
A

This was revenge by IAF for shooting down of Indian Mig air craft during Kargil war. But IAF is justified in doing so by the fact that Pakistani Atlantique was straying in the Indian air space. It brought a lot of heart burn to Pakistanis and they went to Hague international court but nothing came out of it. They had to live with that humiliation. More power to IAF.
M

Professional conduct by IAF in accordance with ROE's in the episode. The Pakistanis lost both money and face in ICJ. And I think one of the officer was given medal for airlifting the wreckage to display it at New Delhi. The PA also tried to shoot down an IAF heli which was showing the incident place to journos.
S

This was revenge by IAF for shooting down of Indian Mig air craft during Kargil war. But IAF is justified in doing so by the fact that Pakistani Atlantique was straying in the Indian air space. It brought a lot of heart burn to Pakistanis and they went to Hague international court but nothing came out of it. They had to live with that humiliation. More power to IAF.
You must log in or register to reply here.
Similar threads
Difficult to face joint China-Pak threat: IAF
PAK-DA not for us : IAF Official
India lets US know: F-16s for Pak could cloud IAF’s 126-plane deal
IAF to issue request for proposal for 114 fighter jet in mid 2024
Share:
Facebook Twitter Reddit WhatsApp Link