Greenwald: Putin’s ‘Trolls’ Are No Match for UK’s Internet Manipulation Program
NSA files published by Greenwald expose unit within British intelligence that plants stories, sets up bogus sites and plants comments on the Internet in a far more systematic way than anything the Russians are accused of. 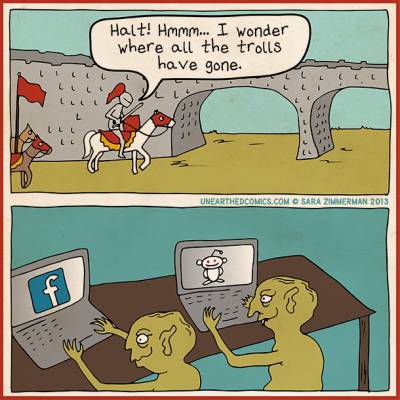 A typical day in Russia, or the UK?

It has become almost an article of faith in the Western media — especially the British media — that the Russian government (or “Putin”) employs a huge troll army to plant pro-Russian and pro-Putin stories on the internet.

Many of these stories come with pictures of a building in St. Petersburg that is supposed to be some sort of “troll factory” - presumably the base of this great troll army.

I don’t know the truth about this story. Some of the claims made about the building in St. Petersburg look to me less than convincing. It seems that a key source for the story is not a disillusioned employee as some have claimed, but is instead a mole who deliberately infiltrated the building in order to “expose” it.

Against that common sense says the Russians are in the business of trying to influence opinion — like everyone else — and that they are hardly likely to do so without using all the methods available to them.

Common sense however also says that claims about Putin’s “troll army” are vastly exaggerated to explain away the large number of negative comments that commonly appear in the discussion threads of anti-Russian articles in the Western media.

There are far too many of these, and the English in which many of them are written is much too good — and their content is far too sophisticated — for most of them to be the work of poorly paid trolls.

What now gives the story an interesting new twist is that Glen Greenwald has now published more material from Snowden’s files that shows that the British intelligence services are busy doing exactly the thing the Western media accuses the Russians of.

The article, which I attach below, shows that there is a secret unit within the British intelligence service that is keeping itself busy with precisely such activities though at a much more sophisticated level than anything the Russians have so far been accused of.

That of course comes as no surprise. Some of the methods used, which are discussed in the document Greenwald has published, look to me to be on the borderline of legality - or even to cross it.

What is one to make for example of information from the document that the British intelligence service sets up “spoof trade sites (or sellers) that may take a customer’s money and/or send customers degraded or spoof products”?

Even if this is done to disrupt the work of drug dealers or pornographers, I don’t see how theft of customers’ money can be legally justified.

To those who place heavy weight on photos and videos that appear on social media sites — such as for example in trying to work out what happened to MH17 — I would also point to one section of the document which says that the British intelligence service uploads “YouTube videos containing “persuasive” communications.”

That this sort of thing is continuously going on and is being done not just by the British is or should be common knowledge.

Let me repeat again what I have previously said - nothing that appears on a social media site or on YouTube or indeed anywhere on the Internet can be treated as evidence of anything unless its provenance can be fully and incontrovertibly established - which more often than not it can’t be.

I doubt that Greenwald’s latest revelations are going to be widely circulated in the Western media. Certainly I don’t expect them to get anything like the attention that was given to the far less reliable stories of the “St. Petersburg troll factory.” As I write this the British media is largely ignoring Greenwald’s story.

However, when the story of “Putin’s troll army” resurfaces — as it will — let us try to remember the information Greenwald has provided us before it vanishes down the media memory hole.


The spy unit responsible for some of the United Kingdom’s most controversial tactics of surveillance, online propaganda and deceit focuses extensively on traditional law enforcement and domestic activities — even though officials typically justify its activities by emphasizing foreign intelligence and counterterrorism operations.

Though its existence was secret until last year, JTRIG quickly developed a distinctive profile in the public understanding, after documents from NSA whistleblower Edward Snowden revealed that the unit had engaged in “dirty tricks” like deploying sexual “honey traps” designed to discredit targets, launching denial-of-service attacks to shut down Internet chat rooms, pushing veiled propaganda onto social networks and generally warping discourse online.

Early official claims attempted to create the impression that JTRIG’s activities focused on international targets in places like Iran, Afghanistan and Argentina. The closest the group seemed to get to home was in its targeting of transnational “hacktivist” group Anonymous.

While some of the unit’s activities are focused on the claimed areas, JTRIG also appears to be intimately involved in traditional law enforcement areas and U.K.-specific activity, as previously unpublished documents demonstrate. An August 2009 JTRIG memo entitled “Operational Highlights” boasts of “GCHQ’s first serious crime effects operation” against a website that was identifying police informants and members of a witness protection program. Another operation investigated an Internet forum allegedly “used to facilitate and execute online fraud.” The document also describes GCHQ advice provided “to assist the UK negotiating team on climate change.”

Particularly revealing is a fascinating 42-page document from 2011 detailing JTRIG’s activities. It provides the most comprehensive and sweeping insight to date into the scope of this unit’s extreme methods. Entitled “Behavioral Science Support for JTRIG’s Effects and Online HUMINT [Human Intelligence] Operations,” it describes the types of targets on which the unit focuses, the psychological and behavioral research it commissions and exploits, and its future organizational aspirations. It is authored by a psychologist, Mandeep K. Dhami.

Among other things, the document lays out the tactics the agency uses to manipulate public opinion, its scientific and psychological research into how human thinking and behavior can be influenced, and the broad range of targets that are traditionally the province of law enforcement rather than intelligence agencies.

It touts the fact that the unit “may cover all areas of the globe.” Specifically, “operations are currently targeted at” numerous countries and regions including Argentina, Eastern Europe and the U.K.

Many GCHQ documents describing the “missions” of the “customers” for which it works make clear that the agency has a wide mandate far beyond national security, including providing help on intelligence to the Bank of England, to the Department for Children, Schools and Families on reporting of “radicalization,” to various departments on agriculture and whaling activities, to government financial divisions to enable good investment decisions, to police agencies to track suspected “boiler room fraud,” and to law enforcement agencies to improve “civil and family justice.”

Previous reporting on the spy agency established its focus on what it regards as political radicalism. Beyond JTRIG’s targeting of Anonymous, other parts of GCHQ targeted political activists deemed to be “radical,” even monitoring the visits of people to the WikiLeaks website. GCHQ also stated in one internal memo that it studied and hacked popular software programs to “enable police operations” and gave two examples of cracking decryption software on behalf of the National Technical Assistance Centre, one “a high profile police case” and the other a child abuse investigation.

The JTRIG unit of GCHQ is so notable because of its extensive use of propaganda methods and other online tactics of deceit and manipulation. The 2011 report on the organization’s operations, published today, summarizes just some of those tactics:

Throughout this report, JTRIG’s heavy reliance on its use of behavioral science research (such as psychology) is emphasized as critical to its operations. That includes detailed discussions of how to foster “obedience” and “conformity.”​
You must log in or register to reply here.
Share:
Facebook Twitter Reddit WhatsApp Link