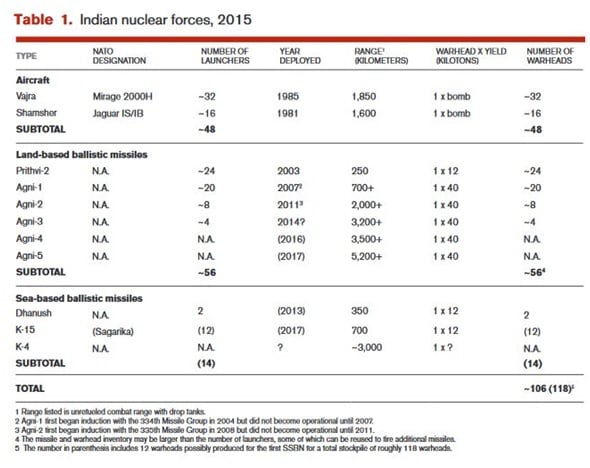 These days almost all articles on India by Pakistani writers invariably blame India for Pakistan falling in the Chinese nuclear lap. They have the same rhetoric without any change whatsoever. This article by Maimuna Ashraf is no different.

Cursory glance at the article and author’s short bio gives an impression that @SAVoices too is an Islamabad based think tank. It seems to be filled with Pakistani writers who really can’t still fathom the seriousness of nuclear warfare. The twitter handle @SAVoices almost forced a rebuttal as if it was going to be published immediately. It’s been over 14 days; the rebuttal has not seen the light of the day on their site.

Ms Maimuna has given 32 links in an article of 1082 words, clearly indicates that it is indeed a product of “Googling” efforts and does not involve any serious research work. But that too was done in a very shoddy way.

The article claims completion of nuclear triad by “both sides” as latest developments “in the aftermath of missile tests conducted by Pakistan and India in the past six months”. Ms Maimuna obviously has not done enough research to make such a statement. In fact she has not even “Googled” the words nuclear triad she would have read which countries are “triad powers” and which are not. Ms Maimuna needs to understand what exactly a triad is. Surely everyone at Stimson Center understands it very well.

It was also widely reported that Pakistan had 'faked' the claim that it successfully test fired a Submarine Launched Cruise Missile (SLCM), the Babur-3. The claim of photoshopped video was supported by the DF ISPR himself in his personal capacity by following twitter handle @rajfortyseven (myself) at that time.

The Ababeel test did not reach its full range claimed by Pakistan. It ws most evident from the NOTAM.

The article claims “the nuclear-tipped BrahMos could also put a strain on Pakistan’s naval fleet by strengthening India’s deterrent and threatening sites in Pakistan”. The Brahmos is not nuclear tipped. Ms Maimuna would have done better had she looked into the Indian Nuclear Forces 2015 by Hans M. Kristensen & Robert S. Norris of Bulletin of the Atomic Scientists.

Here is a glimpse from their nuclear notebook:

It is simply bizarre to consider putting a human in space can assist in a country’s ASAT capability. The point of access to technology is crazy.

Pakistan the Biggest Proliferator in the World

Pakistan, the biggest proliferator in the whole world, made very strong efforts in the 1990s to acquire an indigenous capability in missile production technology through China and North Korea, who became major suppliers to Pakistan's ballistic missile programme, providing technological and other assistance, are not hidden. In December 1996, Hong Kong custom officers raided a Chinese vessel to find 10 tons of ammonium perchlorate believed to have been shipped by the North Korean company Lyongaksan and bound for SUPARCO. Ammonium perchlorate’s uses as a common oxidiser used in the production of solid missile propellant are well known. In March 1996, Taiwan confiscated 15 tons of ammonium perchlorate, from a North Korean freighter bound for SUPARCO.


There is much credence to the theory of proliferation to non-state actors or terrorists by Pakistan. A failed or rouge state may resort to coercive or blackmailing tactics. Pakistani universities teach subjects like nuclear electronics and metallurgy with great emphasis on practical learning. It is surprising to note that even small universities like Allama Iqbal Open University of Aza Khel has a department of Nuclear Sciences along with Department of Hadith and Seerah and Department of Islamic Thought, Islamic Law and Jurisprudence. The students in such universities are generally from the lower middle class who are imbibed with religious-based animosity towards India, Israel and the USA in that order of precedence. A Q Khan, Bashir‑ud‑Din Mahmood and the likes will not hesitate to proliferate at the slightest theological stimulus. The complete issue is topped by the corrupt political leadership under the strict rule of the Pakistani Armed Forces. Almost all Pakistani PMs and Presidents have beaten the drum of the Indian threat whenever there was slightest of danger to their governments. General (Retired) Musharraf has disarmed India a number of times by threatening the first use of Pakistan’s nuclear arsenal.

Recently, in December 2016, Pakistan’s Defence Minister issued a nuclear threat to Israel based on a fake tweet.

On the other hand, India’s record has been absolutely clean. Nobody, especially no Pakistani, can ever point a finger at India’s clean record.

And these terrorists can rain havoc not only on India but on the whole world. In the words of General David H. Petraeus, the former Commander of U.S. Central Command, “Pakistani state failure would provide transnational terrorist groups and other extremist organizations an opportunity to acquire nuclear weapons and a safe haven from which to plan and launch attacks.”

India’s efforts to “target militants across the border” (read target terrorists supported by Pakistan), especially in its own areas under Pakistani occupation, will not cease till Pakistan does not stop supporting terrorism in India.

Pakistan, since its defeat in 1971 is pursuing a ballistic missile programme as part of an effort to develop a deliverable nuclear strike capability against India. However unlike Pakistan, India’s development of missile-based capabilities reflects both regional and extra-regional security concerns. Pakistan's ballistic missile effort is solely Indo-centric.

India always “maintains an [upper] edge over Pakistan” since the two parted ways in 1947 not only “with regard to technological development due to its admission into MTCR” but in every field simply owing to the democratic principles India has followed since then. If only Pakistan could stop harbouring and supporting terrorism, it would progress - in the true sense of the word.

You must log in or register to reply here.
Similar threads
China Claims Quantum Supremacy With Computer 10 Billion Times Faster Than Google's Prototype
Chinese roads and infrastructure in Aksai Chin – a Google Earth study
Military Installations of China, Pakistan & other countries on Google Earth
There is Only 1 Shenzhen River, So Why Does Google Maps Show 2?
Share:
Facebook Twitter Reddit WhatsApp Link