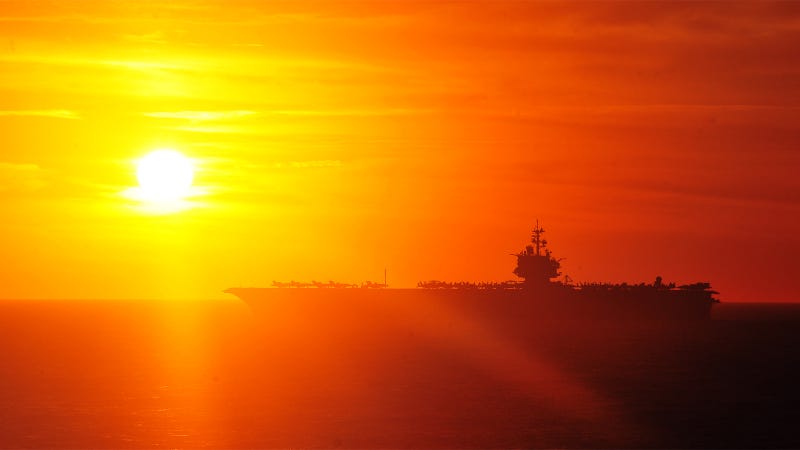 Foot-power might be enough to get you across the house, and gas packs enough punch to get you across the country by car, bus, or plane. Coal had its time to reign as the king of the rails, and electricity is poised to take the world by storm. But when you've got a real job to do, when you've got to move mountains and make the sky shake, there's only one place to turn: that basic force of universal power that man has bent to his whim. We're talking atomic power, baby. And nothing beats it. Here are some monsters that use it to its fullest. 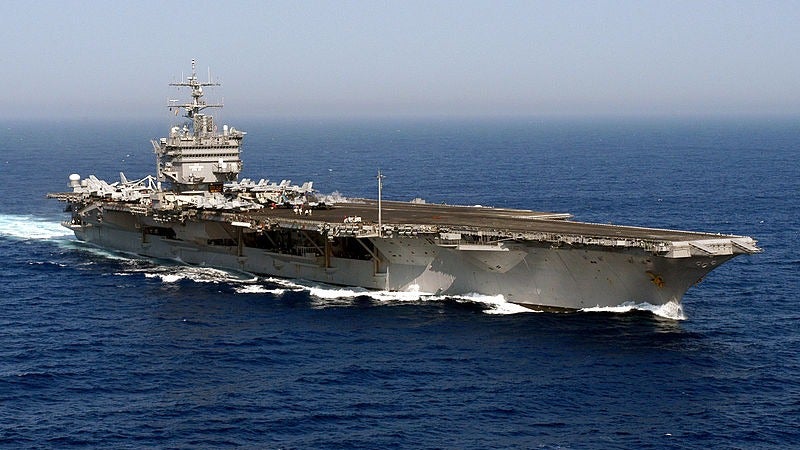 The USS Enterprise is one of the most well-known nuclear beasts, and today she'll reach one of her last milestones: deactivation. The world's first nuclear-powered aircraft carrier, the USS Enterprise is 51-years old, but as imposing as ever. Sporting eight pressurized water reactors fueled by highly enriched Uranium-235 fuel pellets, the Enterprise was, and still is a force to be reckoned with. Because so much of her guts are nuclear, there wouldn't be much left to turn into a museum after decommission, so she's currently scheduled to take a final trip to Washington state for scrapping in 2015, though parts of her may be saved for a memorial. Let's hope so. 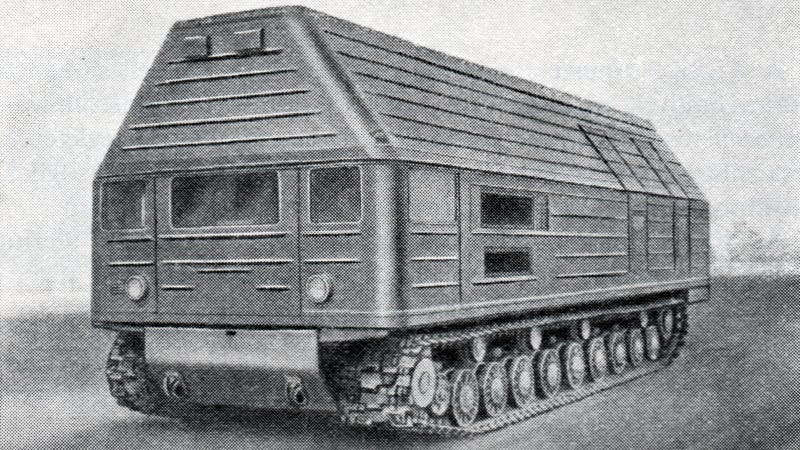 The TES-3, the Soviets' Transportable Electric Station was designed in the USSR in the mid-1950s and is quite literally a mammoth, mobile nuclear power plant. At 310 tons with over 37 pounds of uranium on board, this nine-wheeled Soviet goliath was designed to haul nuclear power everywhere, that and the possibility of a Chernobyl-like disaster. The TES-3 never made it past the prototype phase, but not for lack of awesomeness or bounty of danger, but because it wasn't quite profitable. The project was scrapped in 1961. 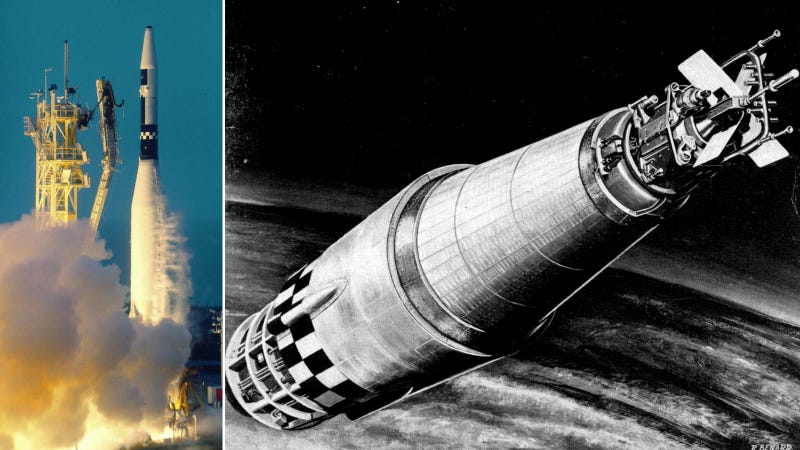 The SNAP (Systems Nuclear Auxiliary Power Program) 10A was the first and only U.S. nuclear reactor actually launched into orbit, and made its way up there on April 3, 1965. The plan was for the SNAP to power huge satellites from orbit for at least one year, but just 43 days in, it failed due to a shoddy voltage regulator. For now, the remnants of the SNAP and its 37-rod payload are still up there, circling the Earth and will continue to do so for around 4,000 years. It should be interesting when it finally makes its way down. 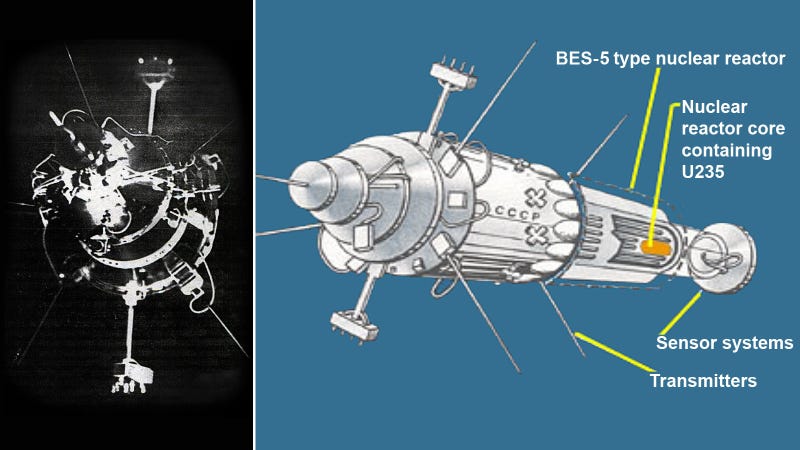 Like the SNAP, the Kosmos 954 was also a nuclear satellite, except Soviet in origin. It launched in 1977, fission reactor and 100 pounds of uranium on board, with the goal of long-term on-orbit observation. Like the SNAP, the Kosmos failed shortly after launch, but unlike the SNAP, it immediately careened back into Earth's atmosphere, spreading all kinds of nasty stuff over northern Canada. A good amount disintegrated on reentry, and after a 10 month cleanup operation, Canadian and American teams were able to remove about .1 percent (what was hopefully "the rest") of the atomic satellite's payload from the contaminated area. 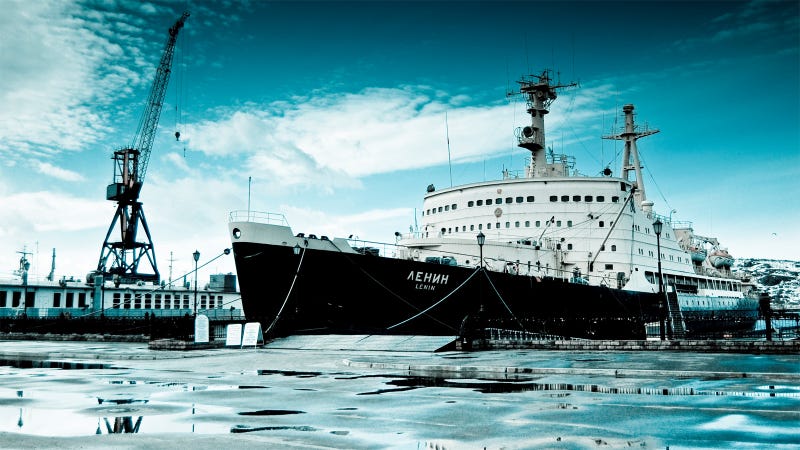 Lenin was the world's first nuclear icebreaker and moreover, the first-ever nuclear powered surface ship. She was launched in 1957 with three pressurized water reactors in her belly but by 1970, all three had been replaced due to various incidents. Now she sits, decommissioned, in Murmansk where she serves as a hulking, once-nuclear museum. Her powerful successors still roam the Arctic seas to this day. 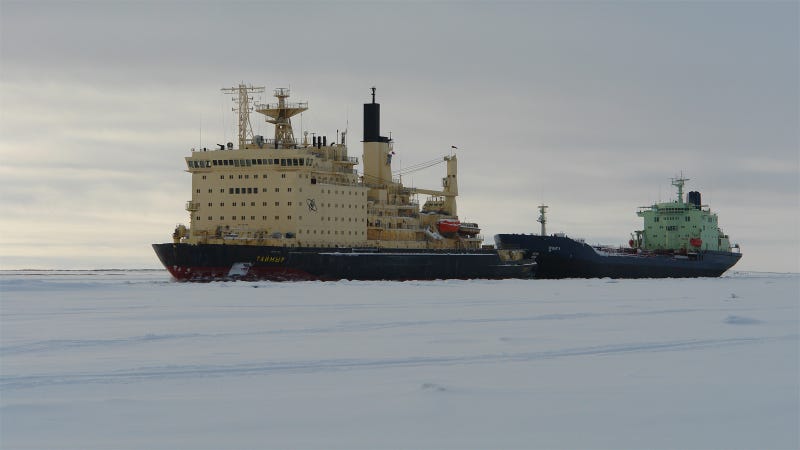 Icy rivers aren't quite the same as icy oceans, and Russia has plenty of both. The 23-year-old nuclear powered NS Taimyr was built with the former in mind. A shallow-draft beast, the Taimyr took to Siberian rivers in 1989 and was the first nuclear ice-breaker designed for river work. She and her sister ship the Vaygach still break ice in Russia today with their nuclear-powered bows. 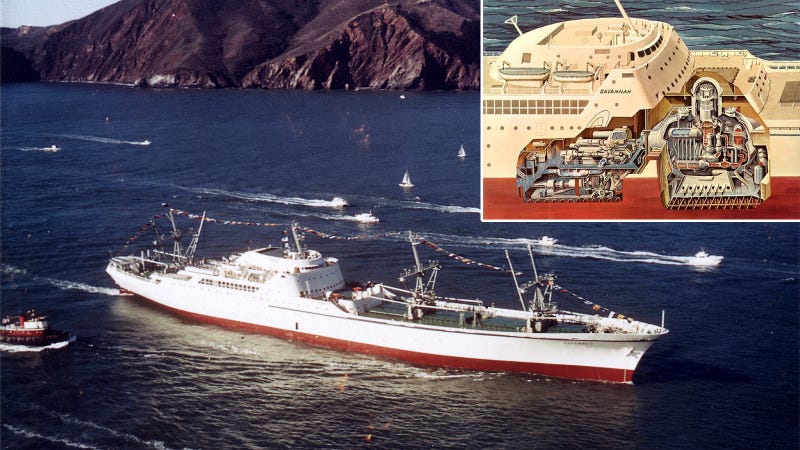 The NS Savannah had a different job than many of her contemporaries; the Savannah was the world's first nuclear-powered cargo-passenger ship. Built in the late 1950s, funded by various U.S. government agencies, the Savannah showed off the civillian potential of nuclear propulsion. She served from July 21st, 1959 until 1972, and now she hangs out as a museum in Baltimore. 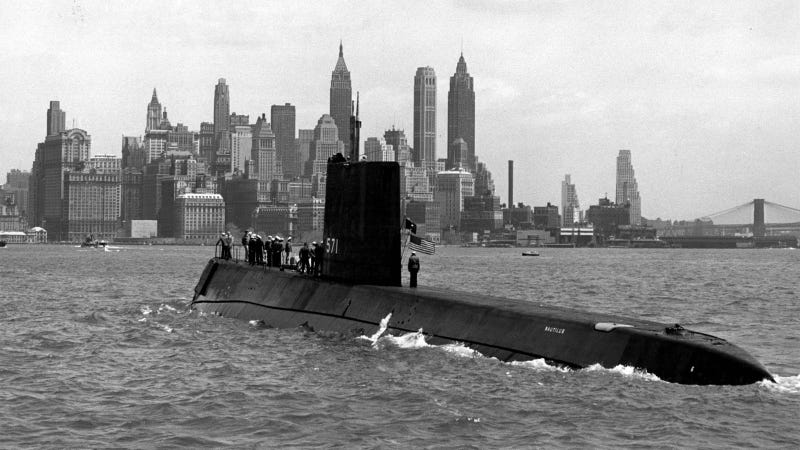 And what's a list of atomic machines without a submarine? The long-retired USS Nautilus was the first to take nuclear power underwater in 1954 with a S2W naval reactor that let her remain below the ocean's surface for far longer than any diesel-powered sub. And as a show of her might, the Nautilus was the first submarine to traverse the North Pole's ice cap without once coming up for air. No small feat. 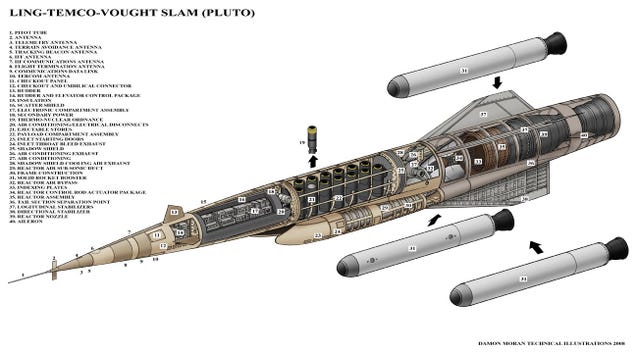 Then there's this thankfully-left-on-the-drawing board Pluto nuclear-powered nuclear cruise-missile. Cold War nightmares turned up to eleven.

Only the engine was built and tested for a few minutes, but the complete thing would have been a total weapon. Simply passing over your enemies at a few hundred meters at Mach 3 would have done damage.
Not to mention the radiation from the unshielded reactor and the fallout from the exhaust. And if that wasn't enough, it would have deployed several nuclear bombs. Making a terminal run, it would have boosted the reactor output over the limit and rained molten plutonium from the reactor all over the place.

Project Orion..an attempt to use small nuclear bombs to power interplanetary spacecraft, included a USAF orbital battleship (According to some sources when President Kennedy was shown the battleship model and an explanation of it's propulsion and armament, he immediately cancelled the project) 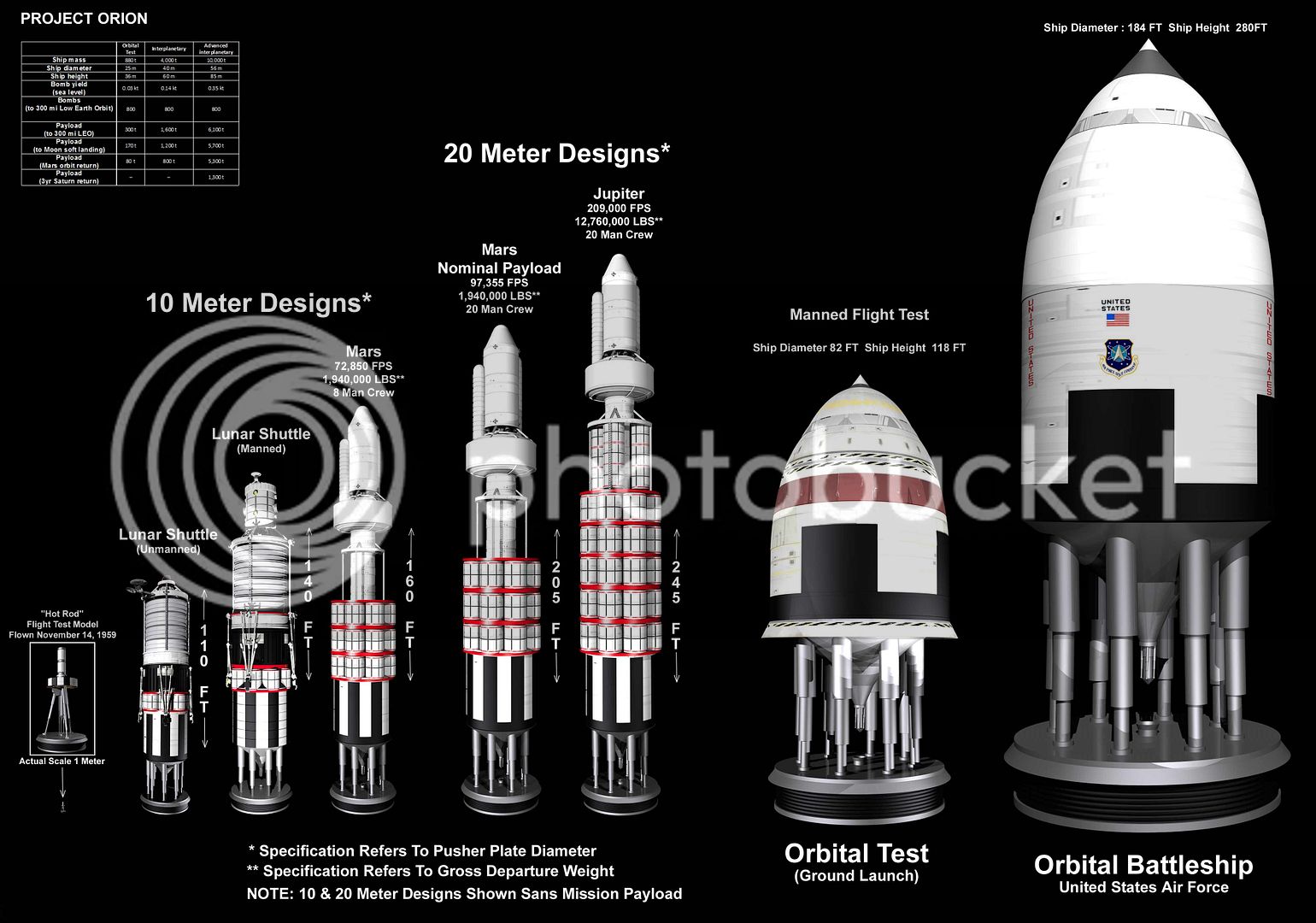 Between 1946 and 1961 the U.S. Air Force and the now-defunct Atomic Energy Commission (whose regulatory duties were taken over by the Nuclear Regulatory Commission, or NRC in 1975) oversaw the Aircraft Nuclear Propulsion (ANP) program. But ANP engineers and management were mired in debate over reactor technologies, how best to transfer nuclear power to a conventional engine, and the best material to shield the crew from radiation. Ultimately, they retrofitted the Convair B-36, a hybrid prop/jet-engine bomber weighing more than 400,000 pounds* (181,435 kilograms) and with a wingspan of 230 feet (70 meters), to house an air-cooled reactor in the aft bomb bay. Up front, the plane was outfitted with a 12-ton lead-and-rubber-shielded crew compartment. The atomic version of Convair's plane, called "Peacemaker," made 47 test flights over Texas and New Mexico between July 1955 and March 1957.

But by the end of the decade, advances in conventional aircraft and engine design outmoded the atom-powered B-36 and the public became concerned about the dangers of a nuclear reactor flying overhead. The program also failed to yield a commercial aircraft due to its steep cost (hundreds of millions in today's dollars, says Stephen Schwartz, editor of The Non Proliferation Review, published by California's Monterey Institute of International Studies), prompting Pres. John F. Kennedy to cancel the ANP in 1961. The U.S. government promptly redirected much of the project's resources toward space exploration and the race with the Soviet Union to reach the moon.
Click to expand... 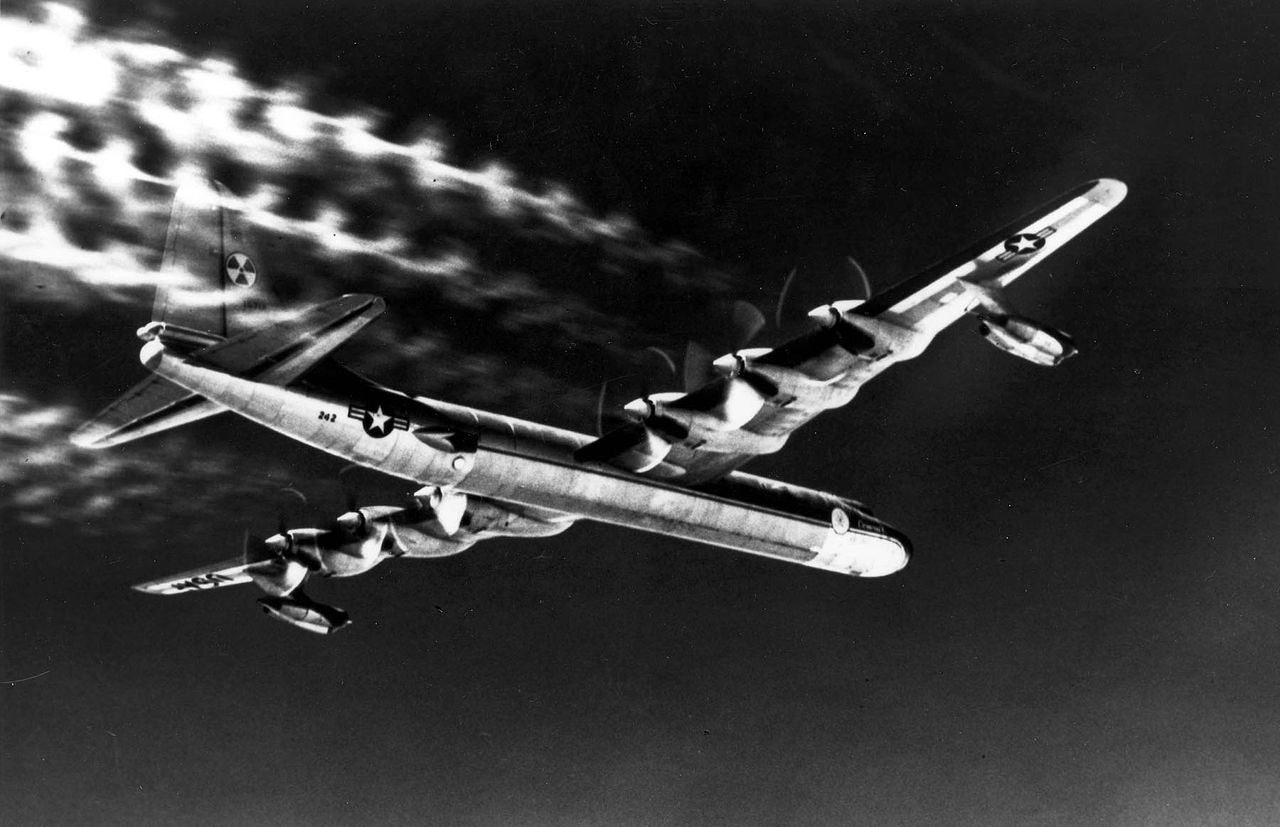 The Soviet nuclear testbed called the TU-95Al.
You must log in or register to reply here.
Similar threads
Magneto-Hydro-Tropism: Pakistani scientists make gigantic breakthrough
China's 9-dash Claim.. A gigantic historical Hoax
Me-321 - Gigant
Why Is China Building These Gigantic Structures In the Middle of the Desert?
Share:
Facebook Twitter Reddit WhatsApp Link