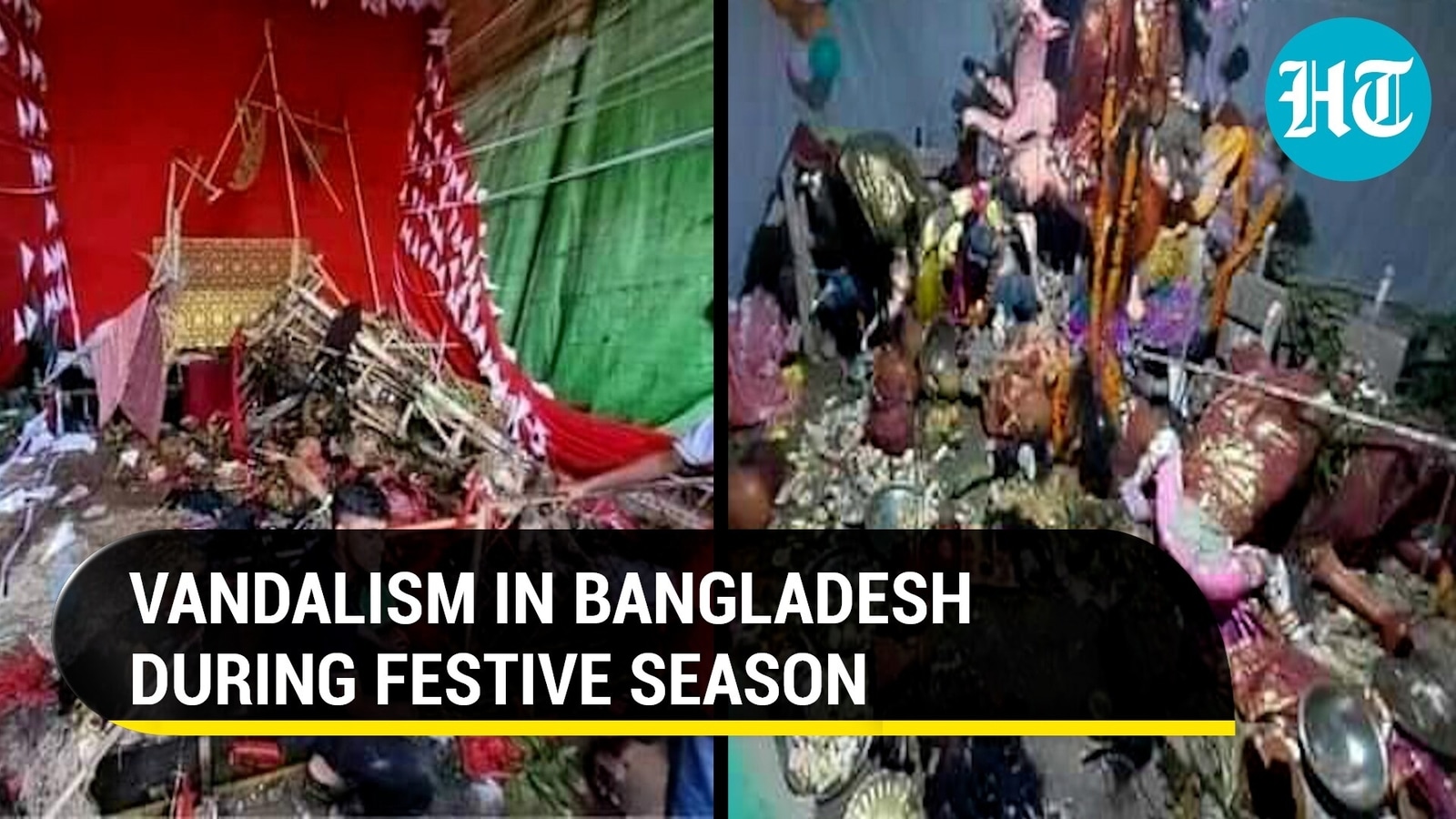 Ministry of External Affairs noted attacks on Hindu temples and Durga Puja pandals in Bangladesh. MEA spokesperson said New Delhi is in close contact with authorities in Bangladesh. We have seen some disturbing reports of untoward incidents involving attacks on religious gatherings in...

At least four persons were killed in violence after some Hindu temples in Bangladesh were vandalised by unidentified Muslim fringes during Durga Puja celebrations, prompting Prime Minister Sheikh Hasina to deploy paramilitary force in 22 districts on Thursday and promise to bring to justice the culprits behind the incident.

A spokesperson from Bangladesh's home ministry said that the Border Guards Bangladesh (BGB) troops have been deployed in 22 districts across the country to stop the spread of violence.


Trending Stories
US-China Conflict Intensifies As China's Tensions With Taiwan Raise
US To Open Its Border For Fully Covid-19 Vaccinated Travelers From November
Facebook's New Harassment Policy To Bar Content Degrading or Sexualising...
Iran Claims Arrest Of 10 Spies Working For Foreign Intelligence Agencies
The elite anti-crime Rapid Action Battalion (RAB) and the armed police were also ordered to stay on guard with the BGB in 22 of the 64 administrative districts and elsewhere to contain any violence, he added.

Three people were killed and several others injured during clashes between Muslim bigots and the police at Hajiganj sub-district in Chandpur, bordering Cumilla on Wednesday while the fourth one succumbed to his wounds later.

Prime Minister Hasina promised to bring to justice the culprits behind the violence, saying anyone involved in the attacks on Hindu temples and Durga Puja venues in Comilla will not be spared.

"The incidents in Comilla are being thoroughly investigated. Nobody will be spared. It doesn't matter which religion they belong to. They will be hunted down and punished," she said while exchanging greetings with the Hindu community members during an event at Dhakeshwari National Temple in Dhaka on the occasion of Durga Puja. She joined the program from from her official Ganabhaban residence through a video-conference.
V 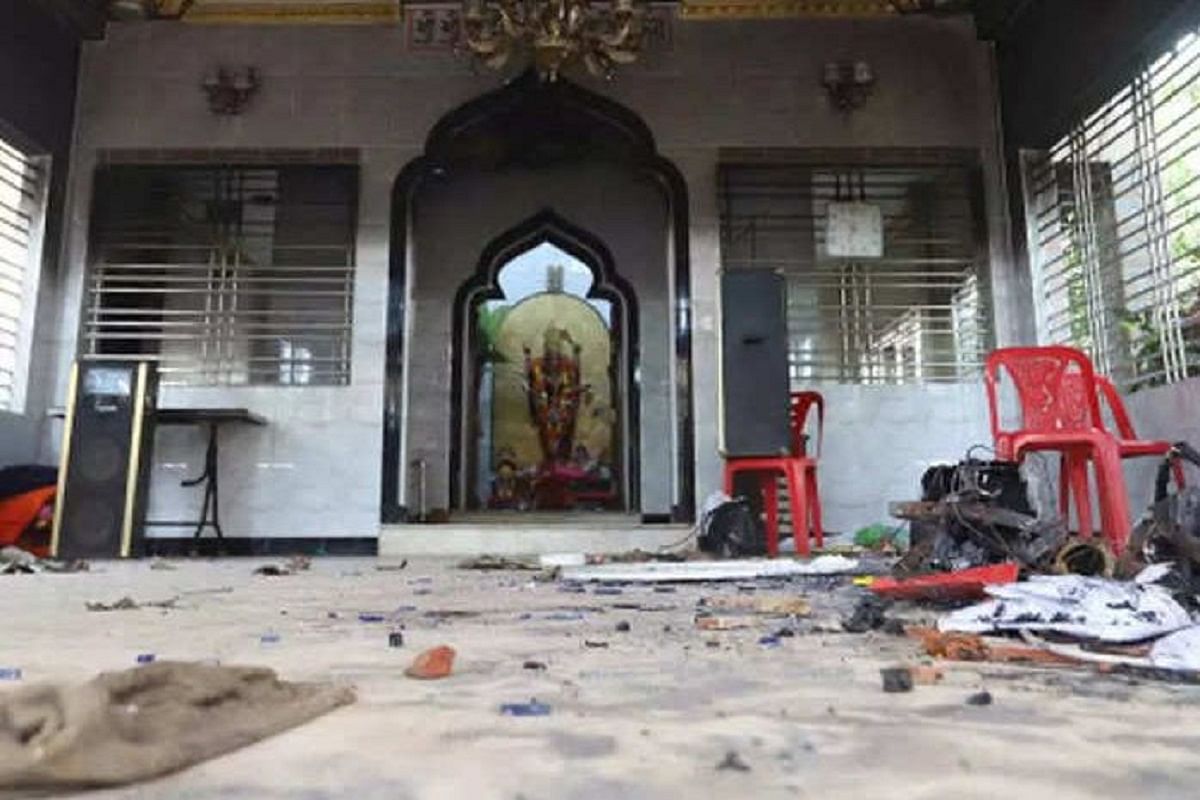 Excellent article, curious about this line, when did this take place:

"In the one instance in which India actually decided to do something about Hindu persecution in Bangladesh, secularists and Islamists ganged up in India to make the law effectively unimplementable."


More:
The attack on temples by Muslim fanatics during the Durga Puja festival in Bangladesh’s Cumilla district demonstrates once again the asymmetry of power between the Hindu and Muslim communities in the Indian sub-continent. This asymmetry implies that the Muslim willingness to intimidate non-Muslims and resort to violence will ultimately push Hindus out of all Muslim-dominated areas.
The fact that most Indian newspapers are willing to call Muslim bigots as mere “goons” and “miscreants” indicates clear unwillingness to name the culprits and what motivates them: they are self-declared Muslims and their religion is Islam. For others to call them anything else is sheer cowardice and hypocrisy.
The power asymmetry relates to two core issues that Hindus have refused to confront: one is the collective ambivalence of the community to organise Hindu society where it can defend its interests. The other is the impotency of the state to defend secularism even if it is threatened by Islamists or Muslim bigots. Dhimmitude is the hallmark of phony one-sided secularism.
Consider just the headlines we saw all over. Many headlines featured a false equivalence between the vandalisation of Hindu temples and the alleged dishonour of the Quran in one Puja pandal. The headlines included the following:
The Quint: “3 killed after alleged desecration of Quran in Durga Puja pandal.”
The Print: “Puja pandals, temples Attacked in Bangladesh over besmirching of Quran, govt promises action”
The New Indian Express: “Protestors shot dead in Bangladesh after claims of desecration of Koran in Hindu temple” (AFP report)
Firstpost: “Bangladesh: Goons attack Hindu temples during Durga Puja celebrations, three killed, paramilitary deployed”
The Hindu: “Miscreants attack Hindu temples in Bangladesh”
The dhimmi international media has done worse, even dispensing with words like “alleged” or “claimed” on desecration.
The Jakarta Post: “Four dead in Bangladesh over Koran desecration”
New Straits Times: Protestors shot dead in Bangladesh after Koran desecration
Barrons: “Deadly violence in Bangladesh over Koran desecration”
If one were to summarise these headlines, clearly there is false equivalence between the attacks on a minority community’s religious festival and the alleged desecration of Islam’s holy book, when there is no such proof that this actually happened. In south-east Asian media, the desecration is more or less accepted as fact in the headlines. And every attempt has been made to shield the religious affiliations of the vandals by calling them “goons” or “miscreants”, especially by Indian media.
This is dhimmitude raised to the power of ‘n’. A dhimmi is a second-class citizen in an Islamic state, whose life and limited liberties depend on the condescension of the majority community. In states with a Muslim minority population, the willingness of politicians and media to shield the community from any criticism is intellectual dhimmitude of the worst kind. Bending over backwards to protect the aggressor from the consequences of his violence is dhimmitude nevertheless.
Leaving aside the question of whether a Puja pandal did something objectionable with the Quran or not, the reality is that Islamic bigots in Bangladesh were already building up an atmosphere for violence long before the alleged desecration happened. In the two months preceding the Durga Puja, both in August and September, violent Muslim mobs attacked temples in Bangladesh. Clearly, some elements want to intimidate the remaining Hindus in Bangladesh, using any pretext whatsoever.
The choice of Durga Puja for these attacks is significant. Durga represents Shakti, power, and by attacking the Durga Puja, whether in Bangladesh or even in parts of West Bengal, Islamists are trying to reduce the worshippers of even Shakti to dhimmitude. The only way to worship Durga and Kali is to imbibe the shakti they represent against the forces of evil, not dhimmitude.
Last edited: Oct 15, 2021

Many reports of riot in noakhali . 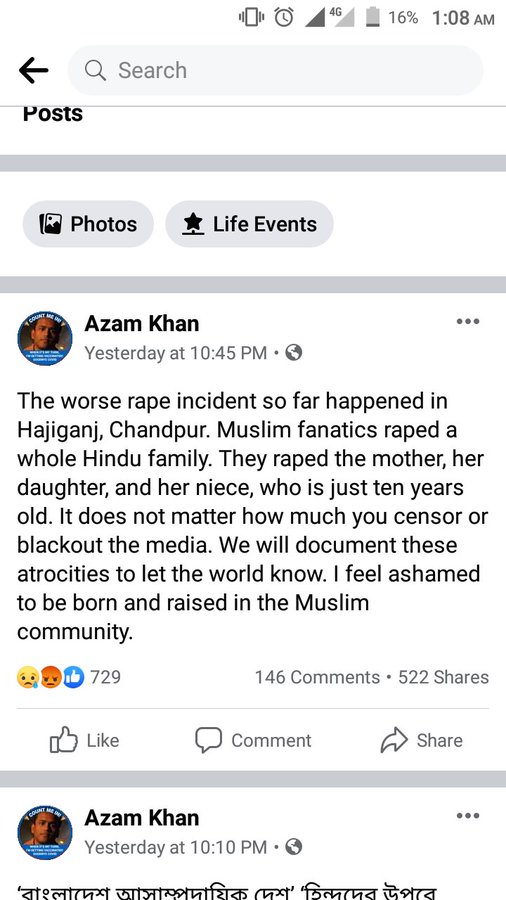 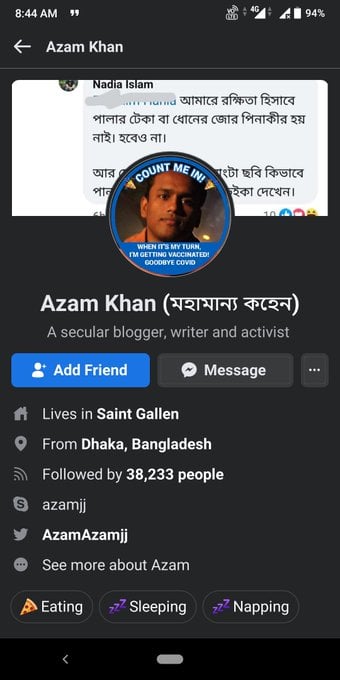 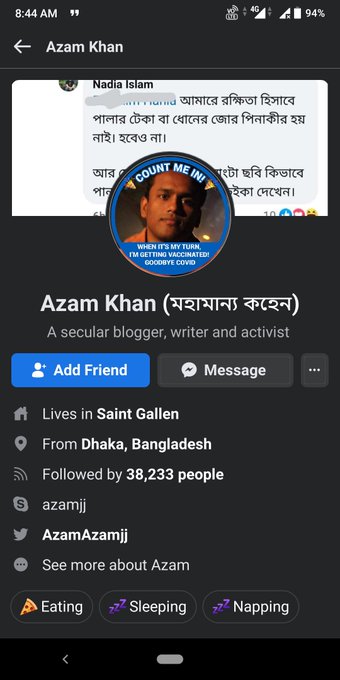 No matter whether the Muslim Majority country is Secular or Islamic by constitution. If Muslims are in Majority, other religious majorities will suffer badly with worst human right violations.

In subcontinent, Hindus are the most prosecuted people still Hinduism is a nazi ideology. Hindus where slaughtered by millions by muslims, still Hindus are intolerant.

We Hindus are descendents of great people who possessed unmatched wisdome, who conquered half of Asia, spred their culture and religion in the heartland of barbarians. People who weren't afraid to neither die not kill for the right cause. People who ruled as a super power, who where center of the world for thousands of year. People whose legacy is still inspiring many.

It pains me to say how much we have degenerated from our great ancestors. I hope and I wish one day a rekindled spirit of Hindus will awaken.

Let us bring all Hindus to India and take proportionate area of land on northern side so that chicken neck can be widened.

So every Hindu in Bangladesh is a hostage.

hit&run said:
So every Hindu in Bangladesh is a hostage.
Click to expand... Hindus will take it on their chests and absorbe it. Like we have every genocide. I hope one day every score will be settled.
Last edited: Oct 19, 2021

@TheWolfpackIN
Bangladesh PM Sheikh Hasina says neighbours like India should be vigilant to ensure that religion is not used to divide people "India has to be aware that such incidents should not take place there which would have an impact on Bangladesh & the Hindus in our country face attacks"
10:01 PM · Oct 16, 2021
https://twitter.com/intent/like?ref...con^s1_&ref_url=&tweet_id=1449299552339517441
Click to expand...

I was just about to post this... more ammunition provided for by Her Majesty Sheikh Hasina herself to Jammat and Pisslamic fanatics to go ham on the dwindling minorities in Bang-i-Islam... while also throwing a shit-pie on Vishwaguru's face.

There must be long term plan to bring them back . Atleast the young ones .. Why not start providing scholarship to minorities for education here in india . We have our own demographic issue here .. it ll solve the problem .. Nations pursue their interest persistantly .. why cnt we ..There is no place for Hindu if not india ..

Shanunoy said:
I was just about to post this... more ammunition provided for by Her Majesty Sheikh Hasina herself to Jammat and Pisslamic fanatics to go ham on the dwindling minorities in Bang-i-Islam... while also throwing a shit-pie on Vishwaguru's face.

I can not say certain things publicly but she will regret it.

hit&run said:
Hindu will take it on their chests and absorbe it. Like we have every genocide. I hope one day every score will be settled.
Click to expand...

Accelerationism. While I am still outraged at every single act of oppression, I take solace in the fact that one day when the persecution crosses all limits, the society at large will respond in kind.

It will be chaotic and violent, but that same chaos will ensure that this corrupt, secularist system shall be dismantled, and future generations will never have to live under it again.

This is as brazen as it gets. A PM of a country stating explicitly that she cannot ensure the protection of her minority citizens. She will get the support of non BJP parties from India as well. Now, let's see as to how GOI will respond, in case, they do choose to do so.
You must log in or register to reply here.
Similar threads
Memories, nostalgia: What Durga Puja means to a NR Bengali
Weapon Worship during Durga Puja
Durga Puja festivities in Bangladesh
Bangladeshi Hindus celebrate Durga puja
Share:
Facebook Twitter Reddit WhatsApp Link