Dhaka: In a series of positive gestures, all designed to give India-Bangladesh bilateral relations a forward momentum it has so desperately been lacking all these decades, Dhaka has announced it will resume negotiations with New Delhi over a long standing proposal for a pipeline across its territory that would take natural gas from Myanmar to India.

This was stated by Mohammad Mohsin, secretary, energy and mineral resources division. 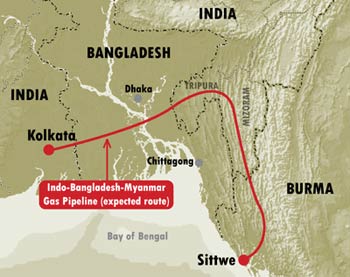 "We have received a green signal from prime minister Sheikh Hasina and forwarded the proposal to the foreign ministry to resume negotiations with New Delhi and Yangon in this regard," Mohsin said.

In the past, India had failed to get Bangladeshi approval for its proposal to build a 290 km (181mile) pipeline to import gas from Myanmar.

According to Mohsin, Bangladesh would hope to access gas from the pipeline and also earn transit fees.

In the recent past Dhaka has ensured that some important militants from India's north-eastern states sheltering on their territory have been handed over to Indian authorities, circumventing the lack of an extradition treaty between both nations.

this would be Good News,
but is it greater then IPI pipeline?`

sittwe to kolkata via sea is a much shorter route!!
unless they want to supply gas to the NE states en route.

That article does not deal with the proposed pipeline, but refers to possible implications for India and its security since the re-engagement of Myanmar by the international community

India, US and Burma's Unity

India, US and Burma's Unity

India has every reason to welcome US President Barack Obama's new engagement with the Burmese government that could help end the prolonged international isolation of our eastern neighbour so critical to our internal security and Asian strategy.

For years now Delhi had cautioned Washington against the policy of isolating Burma and urged the US to recognise the genuine insecurities of the Burmese ruling elite. In a speech at Tokyo that set the tone for his first presidential tour of Asia, Obama has made a long overdue political gesture to Burma's military rulers.

In explicitly underlining the American support for Burma's territorial integrity, Obama was offering reassurance to the Generals who see themselves as the sole custodians of the nation's unity and fear that political reform might unleash uncontrollable ethnic warfare.

Even the most trenchant critics of Burmese military rule have argued that Western support for the nation's unity and territorial integrity must be an early critical step in any international effort to promote internal political change.

In Tokyo, Obama did precisely that. "We support a Burma that is unified, peaceful, prosperous, and democratic. And as Burma moves in that direction, a better relationship with the United States is possible," Obama said in Tokyo.

Obama's public emphasis on Burma's national unity is believed to be part of the broader political framework for the bilateral engagement that had been negotiated in recent weeks between the two sides.

The Obama Administration has also consulted Aung San Suu Kyi, who is the voice of Burma's democratic aspirations in reversing the previous American policies. This framework is said to lay out a series of reciprocal actions that will lead to the end of US and Western sanctions against Burma.

In Tokyo, Obama argued that "despite years of good intentions, neither sanctions by the US nor engagement by others succeeded in improving the lives of the Burmese people." "So we are now communicating directly with the leadership to make it clear that existing sanctions will remain until there are concrete steps toward democratic reform," Obama declared.

The US President also laid out the expectations from the American side for lifting the sanctions: "There are clear steps that must be taken--the unconditional release of all political prisoners, including Aung San Suu Kyi; an end to conflicts with minority groups; and a genuine dialogue between the government, the democratic opposition and minority groups on a shared vision for the future".

With the Association of Southeast Asian Nations (ASEAN) endorsing Obama's initiative, the stage is set for a new phase in Burma's international relations. As the rest of the world returns to Burma, India can more effectively contribute to its neighbour's political and economic modernisation.
You must log in or register to reply here.
Similar threads
Delhi & Dhaka go into huddle as boat carrying ‘Chinese Arms’ seized in Bangladesh
India's First Trans-Continental Freight Train from Dhaka to Istanbul
Dhaka streets turns into Blood streams after Eid sacrifices and rain
Police battle gunman in dhaka
Share:
Facebook Twitter Reddit WhatsApp Link