Chinese and Russian 5th-gen fighters could outnumber the F-35

Chinese and Russian 5th-gen fighters could outnumber the F-35 IDRW.ORG 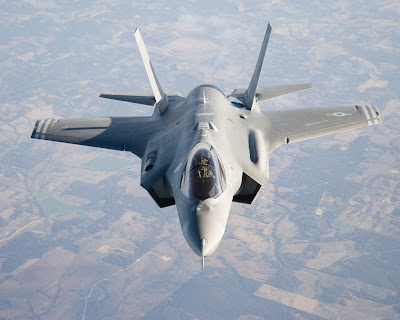 The U.S. military’s historic dominance of the skies, unchallenged since around spring 1943, is increasingly at risk because of the proliferation of advanced technologies and a buildup of potential adversary arsenals, according to Air Force Lt. Gen. David Deptula, the service’s chief for intelligence, surveillance and reconnaissance. Speaking today at the Air Force’s annual convention in the Washington area today, he provided a wide ranging assessment of what the QDR team is calling “high-end, asymmetric threats.”

Emphasizing the increasing capabilities of “anti-access weapons,” such as long range precision missiles, Deptula said pilots in future wars will not operate in the “permissive” threat environments of current wars in Iraq and Afghanistan. Deptula, best known for crafting the Desert Storm air campaign, said potential opponents have learned from U.S. operations and will use precision arsenals to stop a buildup of U.S. airpower near their borders before a war even begins.

Without functioning ground bases, aircraft cannot operate; the Air Force is investing heavily in shorter ranged tactical aircraft, such as the F-22 and F-35, along with a host of older F-15 and F-16. Overseas bases from which these aircraft operate are now threatened by increasingly accurate ballistic missiles in Chinese, Russian, Iranian and North Korean arsenals, Deptula said. The newest models are road mobile and exceedingly difficult to locate.

Enemies will use cyber attacks to target U.S. command and control networks and satellite relays, the smooth functioning of which the military is now completely dependant. “Space is no longer a sanctuary and our satellites are at risk… for five decades the U.S. has led the world in space,” he said, now, “the space domain is perhaps the most likely arena for threats to achieve leveraged effects,” against U.S. operations. The Chinese are developing anti-satellite weapons, as are the Russians, and the number of countries that can launch sensor-loaded satellites into space is increasing.

Because of improvements in over the horizon and passive radars, U.S. aircraft will be detected long before they reach their targets. “The area that we operate in free from detection is rapidly shrinking,” Deptula said, “our adversaries are going to have capabilities that we’ve never operated against.” The newest generation surface-to-air missiles, such as the Russian SA-21, have ranges exceeding 300 miles and the ability to target low flying aircraft, and will likely be exported.

Speaking to the more traditional realm of air-to-air combat, so dear to his audience’s heart, Deptula contends that the U.S. technological edge there is eroding. While “fourth generation” fighters are no match for the most advanced U.S. fighters, Deptula reminded the audience of the Russian export success with the MIG-21, some 12,000 of which were built, and operated by over 50 countries.

Russia and China are both developing “fifth generation” fighters that will be widely exported at prices that will undercut the F-35 price tag. Both nations will thus acquire “near F-22 performance… while attempting to proliferate the [aircraft] to perhaps near F-35 like quantities,” he said. “We may be facing a fighter threat capability in quantities we’ve never experienced before.”

Its not just in the technology realm that America’s enemies are seeking advantage. Unable to counter the U.S. dominance in long-range strike, enemies in wars among the people use information operations to influence perceptions about civilian casualties and deny the U.S. ability to leverage its asymmetric advantages. Deptula said media savvy opponents who skillfully manipulate global public perception are an example of successful “Effects Based Operations,” a doctrinal term that has recently fallen into disfavor, except among air power advocates.
You must log in or register to reply here.
Similar threads
Pakistan Navy Considering to induct Chinese or Russian Twin Engine Jets For Anti ship role Mission
Another Chinese Copy? China's J-20 Stealth Jet looks just like the new Russian MiG Prototype
Chinese and Russian warships sail near Diaoyu/Senkaku Islands
Japan says jets scrambling to counter Chinese, Russian intrusions
Share:
Facebook Twitter Reddit WhatsApp Link