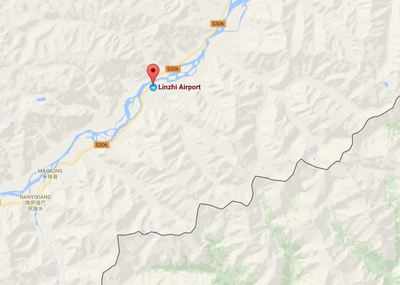 The Nyingchi Mainling Airport is close to the China-India border in Arunachal Pradesh (Google map)
HIGHLIGHTS
BEIJING: China today operationalised the second-largest airport terminal in Tibet, close to the Indian border, which will be able to handle 750,000passengers and 3,000 tonnes of cargo annually by 2020.

The new terminal, the sixth to be opened in Tibet, is part of Nyingchi Mainling Airport, which is located close to Arunachal Pradesh.
China's extensive development road, rail and air infrastructure in Tibet has sparked concerns in India as it also provides major advantage to the Chinese military.

India too has initiated border infrastructure development in the recent years.

The airport covers an area of 10,300 square meters and will be able to handle 750,000 passengers and 3,000 tonnes of cargo annually by 2020, state-run Xinhua news agency reported today.


The airport has seen year-on-year increases in passenger flow since it was put into service in 2006. Passenger volume hit 390,000 in 2016, bringing the total passengernumbers to two million in the past years, Liu said, adding that the new terminal will effectively alleviate pressure brought by the growing number of passengers.