There are presumably 48 units now and they are increasing them.

There kinds of forces are what is essential for 21st century warfare, a blitz with stealthy, covert, surgical precision. Hope indian army changes its perspective and concentrates on building the future soldier than relying on ww2 tactics.

Basically the war is on for many years and there is no way to fight it directly. Groups of trained militants are being sent with modern arms. Recruits of the separatist groups are being trained in our neighbour countries and then sent back to India. Arms and other devices of destruction (be it RDX or drugs) are being smuggled to our country. We need a large force not only to defend our borders but also to keep a check on these above mentioned activities. What we need now is to enhance the combat skills of our para-military forces and up-gradation of the infrastructure to fight these evils. Deploying commando forces in specific regions is a step towards that. Hope these commandoes will soon earn the reputation of slaying those who infiltrate in our country with a purpose of destabilize India. Jai Hind. 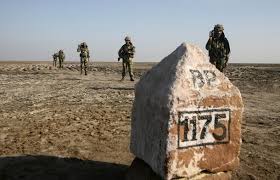 India will deploy an elite unit of BSF 'marine' commandos to keep a vigil on infiltration from the Sir Creek area in Kutch along the Indo-Pakistan frontier. The Marine unit will specifically be deployed along the 'Harami Nala' area in Sir Creek which is a marshy, sluggish and shallow water channel, spread over 500 sq km in Kutch, a senior BSF officer said.

The area has in the past witnessed many violations by Pakistani fishermen.

The marshy topography of the area makes it difficult for troops to react swiftly against infiltration and incidents of smuggling through this area.

The Union Home Ministry recently approved a budgetary sanction of Rs 44 crore to raise a unit of the BSF.

The marine unit, first-ever in a paramilitary organisation, will be trained to undertake amphibious (both land and water) operations and will possess special swimming and diving skills to operate in this area.

They will also be equipped with weapons and logistics required to operate in such areas.

"The deployment of the marine unit will take place once the training of the personnel is complete. These personnel will undertake patrolling along the 'harami nala' stretch on power boats," the BSF officer said.

It is also proposed to impart specialised training to these personnel from the Indian Navy and a full battalion (about 1,000 personnel) will subsequently be raised within the force, the officer said.

Pakistani fishermen cross into the Indian side along the 'Harami Nala' during high tide in order to catch fish and at times they are found not indulging in any illegal activity. But keeping vigil along this area is a challenging job, the officer said.

This after Siachen Chai-biskoot talks with Pakistan makes clear India's stand on these issues.

This is very good move though quiet late. It is very important to insulate Sir creek, as this is the easiest route for AQ activists & other terrorist outfits to infiltrate in our country.
B

good move ....they need to have amphibian quality of weapons and vehicle ,hover craft and speed boats small assault ships 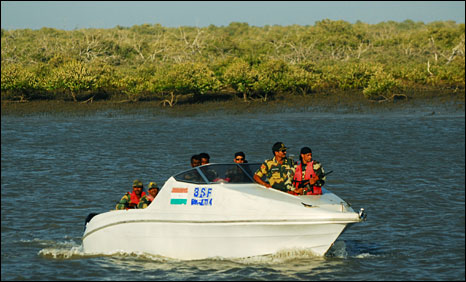 why is pilot of the boat is white, is he from Navy or Coast Gaurd,
You must log in or register to reply here.
Similar threads
BSF arrests nine Pakistanis in Sir Creek
Rakibools Shoot BSF Jawans on their Backs as they're returning from a Flag Meet
BSF jawan arrested for sharing info with Pak agent
Pakistan More Aggressive After Imran Khan Came To Power: BSF Chief
Share:
Facebook Twitter Reddit WhatsApp Link