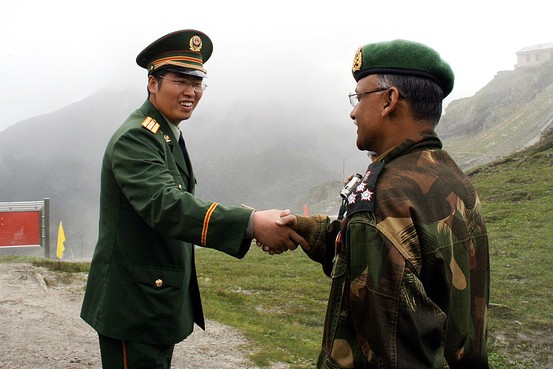 Why China and India Need to Resolve Their Boundary Dispute Now - WSJ.com

It has often been taken for granted that China and India will rise simultaneously and peacefully in the 21st century. But a recent flare-up challenges that view. Thirty-seven years after the two countries fought a border war and 28 years since they opened settlement negotiations, the entire frontier from Kashmir to Burma remains in question. It would be dangerous to ignore this festering sore any longer.

The dispute stretches back to the British Raj, when colonial official Sir Henry McMahon drew the boundary between India and Tibet at the Shimla Convention in 1913. China has never recognized the McMahon Line, and regards the Indian state of Arunachal Pradesh as part of its Tibetan Autonomous Region.

Lately the border has been arousing more fervent passions than usual. Indian Prime Minister Manmohan Singh visited the state of Arunachal Pradesh earlier this month, irking Beijing and prompting New Delhi to assert "Arunachal Pradesh is an integral part of India." Earlier this year, Beijing attempted to block a $1.3 billion loan to India by the Asian Development Bank, part of which was meant for a watershed project in Arunachal Pradesh. The war of words is likely to escalate as the exiled Tibetan spiritual leader the Dalai Lama plans to visit Arunachal Pradesh next month. Beijing is pressuring India via diplomatic protests and a media campaign to make the Dalai Lama abandon his planned trip.

The causes for the recent deterioration in relations are complex. China perceives India as the weakest link in an evolving anti-China coalition of democratic and maritime powers (the United States, Japan, Australia and India). Viewing India as a pawn in Western designs to encircle and contain China, Chinese leaders worry about the ramifications of India's power particularly in Tibet, a concern fanned by the March 2008 uprisings there. A common theme in state media this year is the desire to capture the lost lands and crush India for daring to compete with China.

Meanwhile, Beijing's influence in Pakistan, Nepal, Bangladesh, Burma and Sri Lanka—all of whom have relationships with India that range from strained to downright hostile—fuels Indian anxieties. Beijing's opposition to India's membership in regional institutions like the East Asia Community and international forums like the United Nations Security Council; China's attempts to scuttle the U.S.-India nuclear deal at the Nuclear Suppliers Group; and Chinese naval forays into the Indian Ocean region all have reinforced Indian suspicions that China seeks to deny India its proper place in the international system.

As a result of these rising tensions the potential for armed skirmishes, if not conflict, on disputed borders remains high. Since 2006, Chinese strategic experts, bloggers, retired diplomats and think tanks linked to the People's Liberation Army have been discussing the possibility of a "partial border war" to "teach India a lesson." Parallels are being drawn to the pre-1962 situation, when Beijing blamed India for Tibetan uprising and New Delhi provoked China with its "Forward Policy" on the border. China has referred to India's current troop movements as a "New Forward Policy." The Indian media, always wary of China, have chimed in by sensationalizing alleged border incursions and by hyping "the China threat." India's military has bolstered its presence in areas bordering Tibet. The military forces of both sides are once again pushing into remote and previously (for the most part) unoccupied mountainous frontier regions.

Adding fuel to this fire is mounting confidence on the Chinese side that China would win any conflict and reap broader strategic rewards from doing so. PLA generals believe India's military remains inferior in combat, logistics and war-fighting capability. Should the PLA succeed in occupying Tawang, a town near the border, and giving India's military a bloody nose, the Chinese thinking goes, Indian leaders would be much more deferential in dealing with China. A short and swift victory would underscore the need for other countries in Asia, especially U.S. friends and allies, to accommodate China's growing power by aligning with, rather than against, Beijing.

Though India is no match for China in force-on-force posture, it is no pushover militarily. Unlike the PLA, which has not seen combat since the Vietnam War of 1979, India's military today is battle-hardened and experienced. If Beijing is determined to gain the lost territory in Arunachal Pradesh, India is equally determined not to see a replay of the 1962 war by losing large chunks of territory. With India embarking upon a massive military modernization plan, a punitive war may well be too costly and its outcome unpredictable.

However, all this misses the fact that China and India are both nuclear-armed nations with enormous stakes in maintaining peace. Burgeoning trade ties and collaboration on issues like climate change have shown both capitals the benefits of cooperation even as border tensions rise. For Beijing, a hardline approach to India could backfire and drive India and its other Asian neighbors into stronger opposition to China and deeper alignment with Washington and Tokyo. The pursuit of aggressive foreign adventures would destroy the benign "peaceful rise" image that China is so assiduously striving to achieve. A conflict will cost India dearly in terms of economic developmental objectives and political ambition of emerging as a great power in a multipolar Asia.

Other countries, particularly the U.S., can play a vital role in preventing escalation. Washington enjoys close ties with both China and India and could exert diplomatic pressure on both sides to reach a settlement. But ultimately this is a border dispute between two large countries, and they alone have it in their combined power to resolve their differences peacefully. It's in both their interests to do so.