Antony defends Army, says no possibility of military coup ever 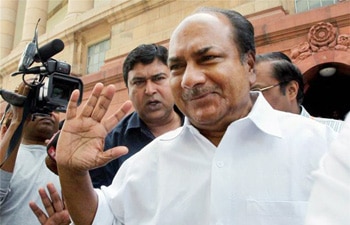 "I can say one thing with conviction. Indian military is a responsible force. While the military takes decisions on operations, it obeys all policy matters taken by the civilian government. There is no need for any concern," Antony told reporters here on the sidelines of a Coast Guard Investiture ceremony here.

The so called movement of army was a "routine training exercise" only. It is a 'closed chapter", he said.

He was replying to a query on the fresh controversy that erupted on the movement of two army units near Delhi two years ago with the then Director General of Military Operations (DGMO) Lt Gen A.K. Choudhary stating that there may have been "distrust" between the Army and government on the issue.

The revelation was "not new". In 2012, Antony said, he had given replies to Parliament three times-- twice for starred questions and once on an unstarred query, he said adding it was there in Parliament records.

Our military has a tradition to follow & has many smart thinkers.

A Military coup & then what ? the burden of Governance, managing inter regional conflicts, daily grind of mundane issues!!

India in its present state is largely ungovernable by the Military.

Resource to population ratio is so badly skewed that even God almighty will not be able to fulfill the burgeoning aspirations of the people.

Chaos can only stabilize after added chaos to a tipping point. Let the self important, good for nothing politician, strut about & show he is in control of issues that effect our Nation ( whereas a million implosions are happening everyday) and take the flak or avoid it.

Call the Military when bad things hit the ceiling, we will come & deliver!! remember unless you call we are hesitant in gate crashing the ongoing chaotic party.

He and Manmohan Singh then requires to apologise to the Army and the Nation for sullying the image of the Army with that Indian Express lie!
F

No chance of a military coup in India: A K Antony | The Indian Express

Last edited by a moderator: May 10, 2015
You must log in or register to reply here.
Similar threads
AK ANTONY'S GOOF-UPS HAS LED TO LOW DEFENSE ALLOCATION BUDGET-2016
The price India is paying for AK Antony's comatose tenure
How AK Antony damaged the soul of the Army
New Navy chief to be named soon, Antony says
Share:
Facebook Twitter Reddit WhatsApp Link