The ANA is to receive 55 additional Commando Select Armored Security Vehicles by February 2016.

The United States is rushing additional military hardware to Afghanistan to support the embattled Afghan National Army. According to IHS Jane’s Defense Weekly, the U.S.-based defense contractor Textron Marine & Land Systems has been awarded a $56.2 million contract for the delivery of 55 additional Commando Select Armored Security Vehicles by February 2016.

“Vehicle deliveries are to begin in October and finish by February 2016, and the platforms include 36 with Objective Gunner Protection Kits, 15 with enclosed 40 mm/.50-calibre turrets, and four ambulance variants,” the article notes.

The Afghan National Army (ANA) already operates 623 Commando Select wheeled armored cars, although it is unclear how many of them are functional. More heavily armored and more heavily armed than the ANA’s Humvees, the Commando Select is considered to be the backbone of the Afghan government’s ground forces in Afghanistan.

The ANA currently operates three different variants of the Commando Select including ambulance, enclosed turret, and so-called Objective Gunner’s Protection Kits–gun shields manned by a gunner up top–versions. Each version has a crew of three and can carry up to seven passengers. In addition, the ANA also uses the vehicle as an armored personal carrier, alternatively armed with a machine gun or grenade launcher, that can carry up to eight soldiers.

The Commando Select is a derivative of the USA M1117 Armored Security Vehicle, however, unlike the M1117, the Commando Select purportedly has the same mine blast protection than a heftier Mine-Resistant Ambush Protected (MRAP) Category 1 vehicle.

In addition to heavier armor, reasons for the Commando Select’s improved mine blast protection are its V-shaped hull, ceramic plating, and an inner spall liner. Furthermore, the armor of the vehicle is angled and therefore can deflect rocket-propelled grenade projectiles.

The Commando Select is armed with a .50 caliber M2 Browning machine gun and the Mk 19 40mm auto-grenade launcher.

Back in September, the Special Inspector General for Afghanistan Reconstruction, John F. Sopko, expressed his concern that the United States may be oversupplying the Afghan National Defense and Security Forces with military hardware:

His list of concerns included medium-tactical vehicles, M-16 rifles, Humvees, and ammunition. The Pentagon has so far not provided an explanation why the ANA is in need of additional armored cars. 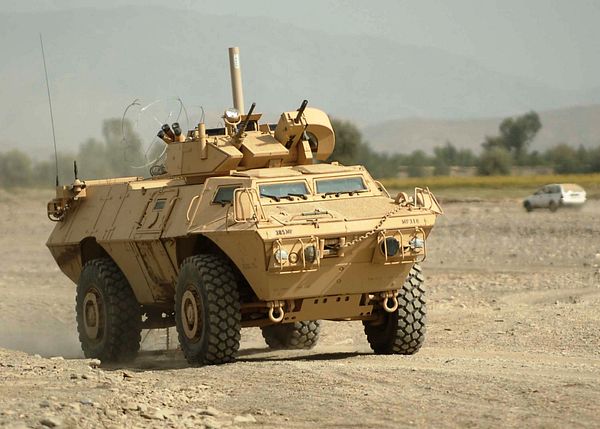