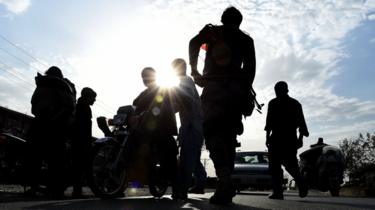 Image copyrightGETTY IMAGES
Image captionAfghan police are involved in the fight against Taliban insurgents in Helmand
A US air strike has killed 16 Afghan policemen in the southern province of Helmand, local officials say.

The attack happened as Afghan security forces were clearing Taliban militants from a village in the Gereshk district, police told AFP news agency.

Nato has acknowledged the incident, without detailing how many Afghans died, and promised an investigation.

Meanwhile, the Taliban say a son of their leader has died carrying out a suicide attack in the same area.

The group named him as Abdul Rahman Khalid, son of Mawlawi Hibatullah Akhundzada, and said the attack on Thursday that he and other "martyrs" had carried out had caused heavy casualties.

Afghan officials said they could not confirm the report.

The US air strikes on Friday afternoon were part of the Nato mission to support Afghan forces against the Taliban.

A Nato statement said: "During a US-supported (Afghan security) operation, aerial fires resulted in the deaths of the friendly Afghan forces who were gathered in a compound.

"We would like to express our deepest condolences to the families affected by this unfortunate incident."

In a separate development, there are reports of numerous casualties after the Taliban ambushed an Afghan police patrol in the north-eastern Badakhshan province.

Some reports say at least 10 police officers were killed, while local officials put the figure at 35. 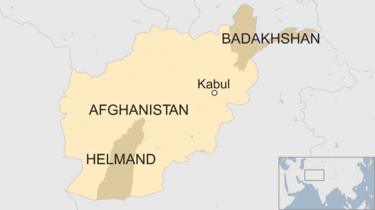