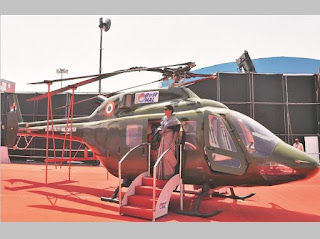 HAL chief promises increased outsourcing in building 106 trainer aircraft, 187 light choppers
By Ajai Shukla
Business Standard, 13th Dec 17
On Tuesday, Hindustan Aeronautics Ltd (HAL) offered the aerospace vendors that feed its aircraft assembly lines a tantalising glimpse of major business opportunities ahead, adding up to some Rs 12,500 crore.
HAL’s chairman, T Suvarna Raju, told a gathering of the company’s vendors in Bengaluru that they would soon participate in building 100 trainer aircraft – the indigenously designed Hindustan Turbo Trainer–40 (HTT-40). In addition, the Light Utility Helicopter (LUH), of which the Indian Air Force is committed to buying 187 pieces, is nearing certification.
“Given our large number of platforms with the Indian defence forces, we remain committed to increase the scope of work to our vendors to ensure success of our programs. HAL is looking to produce 100 basic trainer aircraft HTT-40 soon, once spin tests are completed in the coming months. In the rotary wing segment, our efforts are on to achieve basic certification of LUH by the middle of 2018”, said Raju.
In 2013, then IAF chief, Air Chief Marshal NAK Browne wrote to the defence minister stating that the HTT-40 would cost Rs 59.31 crore in 2018, and escalate by 2020 to Rs 64.77 crore. That letter was intended to scuttle the HTT-40 project as too expensive, and make a case for importing more Pilatus PC-7 Mark II trainers from Switzerland.
Now, however, it has emerged that HAL will build the HTT-40 for an affordable Rs 45 crore apiece. With the defence ministry having already approved the procurement of 106 indigenous trainers for the IAF, this would translate into business worth about Rs 5,000 crore for the aerospace sector.
HAL has managed to develop the indigenous trainer for a frugal Rs 450 crore, employing internal company funds, Raju told Business Standard in July. An additional Rs 120 crore will go on establishing the HTT-40 manufacturing line.
Separately, the manufacture of 187 LUHs, each costing an estimated Rs 40 crore according to internal HAL estimations, will generate business worth Rs 7,500 crore for the aerospace industry.
HAL says indigenisation levels in these platforms would be as high as 80 per cent, given that many imported components, sub-systems and systems would be progressively manufactured in India under transfer of technology. That means Rs 2,500 crore would flow abroad to global original equipment manufacturers (OEMs). Even so, Indian aerospace vendors, for the most part micro, small and medium enterprises (MSMEs) that depend almost entirely on government orders, see the remaining Rs 10,000 crore as a significant opportunity.
Business is also expected to flow from a separate acquisition of 197 Kamov-226T light helicopters, which Russian helicopter manufacturer, Kamov, will initially supply ready-built, and then transfer technology to progressively manufacture in HAL.
In manufacturing aircraft like the Jaguar, Sukhoi-30MKI and the Hawk trainer, HAL had monopolised most of the manufacturing work, relying on very little outsourcing. More recently, the manufacture of the Tejas Light Combat Aircraft (LCA) has seen HAL assume the role of “systems integrator”, with a significant percentage of the supply chain outsourced to private aerospace industry. In the future, HAL envisages functioning exclusively as a systems integrator, with a private industry supply chain feeding in components, sub-systems, systems and even major assemblies like the forward, middle and rear fuselage.
You must log in or register to reply here.
Similar threads
Update on Aerospace Industry in India
India needs a vision for aerospace industry
Emerging careers in the aerospace industry
India has Immense Potential in Aerospace Industry: DRDO
Share:
Facebook Twitter Reddit WhatsApp Link