A tribute to Indian boxing 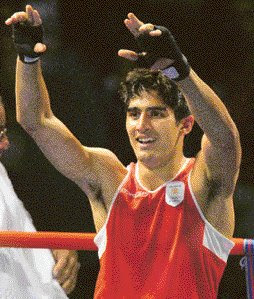 Vijender Singh Kumar, or Vijender Singh, is an Indian boxer from the Bhiwani district in Haryana. Born on October 29 1985 at Kaluwas village in Bhiwani, Vijender was inspired to take up the sport of boxing by his elder brother Manoj, a boxer himself. Vijender’s early days were spent in his village where he did his schooling, after which he received a bachelor’s degree from a local college in Bhiwani. He practiced boxing at the Bhiwani Boxing Club where coach Jagdish Singh recognised his talent and encouraged him to take to professional boxing.

Vijender was picked to train and compete at several international level competitions such as the 2004 Athens Summer Olypics and the 2006 Commonwealth Games. At the 2006 Asian Games in Doha, he won the bronze medal after losing the semifinal bout against Kazakhstan's Bakhtiyar Artayev. At the 2008 Beijing Summer Olympics, he defeated Carlos Góngora of Ecuador 9–4 in the quarterfinals which guaranteed him a bronze medal — the first ever Olympic medal for an Indian boxer. He won bronze at the World Amateur Boxing Championships in 2009. In the same year, the International Boxing Association (AIBA) announced Vijender as the top-ranked boxer in its annual middleweight category list with 2800 points.

Vijender was born on October 29, 1985 into a Hindu Jat family in Kalwas village, 5 kilometres (3.1 mi) from Bhiwani, Haryana. His father drove buses overtime so as to pay for Vijender and his elder brother Manoj's training. After Manoj succeeded to enter into the Indian Army in 1998 with his boxing credentials, he decided to support Vijender financially so he could continue his boxing training. He practiced at the Bhiwani Boxing Club, where former national-level boxer and coach Jagdish Singh recognised his talent. Working part-time, he tried his hand at various professions to financially support his coaching. The first recognition came when Vijender won a silver medal in his first sub-junior nationals in 1997 and went on to bag his first gold medal at the 2000 Nationals.

At the 2008 Summer Olympics, he defeated Badou Jack of Gambia 13–2 in the round of 32. In the round of 16, he defeated Angkhan Chomphuphuang of Thailand 13–3 to reach the Middleweight Boxing Quarterfinals.[11] He beat southpaw Carlos Góngora of Ecuador 9–4 in the quarterfinals on 20 August 2008 which guaranteed him a medal, the first ever Olympic medal for an Indian boxer. He lost 5–8 to Cuba's Emilio Correa in the semi-finals on 22 August 2008 and shared a bronze medal.


At the Beijing Olympics:

Akhil qualified for the 2008 Olympic Games beating among others, the silver medallist from the 2004 Summer Olympics - Worapoj Petchkoom at the Asian boxing qualifying tournament in Bangkok. At the Olympic event, he made his way to the second round in the Bantamweight 54 kg category beating Frenchman Ali Hallab on points [12-5]. In the 16th round, he 'controversially' beat current World Champion Sergey Vodopyanov coming from 2-6 down in the second round of the bout. The score was tied 9-9 at the end of the fourth round. The judges' decision went in favor of Akhil Kumar on account of his having landed a greater number of punches. He lost 3-10 to Veaceslav Gojan of Moldova in the quarter finals on August 18, 2008.