With a population of 1.2 billion that is expected to multiply over the next couple of decades, India has taken a keen interest in new nuclear technologies and is fast becoming a key player in the energy arena. The International Energy Agency, an energy research organization, expects that India's energy demand will "more than double by 2030". It is furthermore clear that India will need to expand its power grid in order to reach the significant portion of the country that currently does not have electricity.

With pressure coming from the international community to reduce its carbon emissions, India is looking for energy investments that will pay-off in the long-term. As Rajendra K. Pachauri, chairman of the Intergovernmental Panel on Climate Change, astutely stated, "India cannot emulate developed countries. We have to find a path that is distinctly different". Part of the answer lies in India's exploitation of new nuclear technologies.

Currently, uranium can be purchased on the market at a competitive price, which seems to preclude the much needed investment in research and development of new nuclear technologies. However, it is imperative that these newer technologies receive adequate attention because nuclear energy seems to be a likely interim fuel source for the transition from carbon-based fuels to fully-renewable energy sources. In its current state, nuclear energy does not seem to be safe or efficient enough to win wide-spread trust from citizens and policy-makers. Therefore, the need for new nuclear technologies is becoming ever the more pressing.

One important technology that India is making inroads on is the thorium-fueled fast breeder nuclear reactor. As India's Department of Atomic Energy clearly recognizes, "We have rather meager reserves of uranium"¦We, however, have nearly a third of the entire world's thorium"¦Our strategies for large scale deployment of nuclear energy must be, and are therefore, focused towards utilisation of thorium."

India currently has a three-stage nuclear power program that will eventually allow it to make full use of its thorium reserves. In the first stage, the fast neutron reactors that India is developing will burn uranium in pressurized-heavy water reactors to produce plutonium.

During the second stage, the fast neutron reactors will burn the plutonium with a uranium and thorium blanket. Thorium itself is a fertile element, and while it has the capacity to fission, it needs a boost from low-enriched uranium or plutonium, which can be sourced from spent fuel or decommissioned nuclear weapons. Thus, using thorium addresses many of the waste disposal, proliferation, and safety hazards that are often associated with conventional, uranium-based nuclear reactors. Investing in thorium-based reactors is cost efficient for India more so than for many other countries for two primary reasons: one being the vast thorium reservces, and the other being its limited reactor base. Both these factors would reduce the comparative cost that India would undertake with this investment.

Gradually, as the country approaches the third stage of the nuclear program, the reactors will burn the U-233 from the second stage and the fuel blanket will be primarily composed of thorium. Thus, about two-thirds of the reactor's power will be fueled by thorium. Additionally, thorium fuel bundles can last much longer than conventional uranium fuel bundles. Thus, the spent uranium would eventually be replaced by thorium, eventually creating a fully thorium-fueled reactor.

In 2002, construction on a prototype fast breeder reactor at Kalpakkam was approved by the regulatory authority, and this reactor is expected to progress to the second stage of the program by late 2014. Six additional fast reactors are slated for construction, with four of them planned for 2020.

Within 25 years, India plans to increase its use of nuclear power for electricity generation from 2.8% to 9%. With the passing of the U.S.-India Civil Nuclear Agreement, which allows India even greater independence in the trade of nuclear energy and technologies with other countries, India may eventually establish itself as a preeminent center for nuclear technologies.
Dr. S. Banerjee, Chairman of the Atomic Energy Commission, mentioned in a 2010 address to the IAEA that the Nuclear Power Corporation of India Limited is "ready to offer Indian PHWRs of 220 MWe or 540 MWe capacity for export". India's investments will provide India with the electricity capacity that it desperately needs, while simultaneously providing the global energy market with a competitive source of safer and more efficient nuclear energy. The Institute for Defence Studies and Analyses writes that "The time has also come for India to think beyond domestic development of nuclear power reactors and showcase its civilian nuclear capabilities abroad."

More than 40 percent of world thorium reserves in india.

More than 40 percent of world thorium reserves in india.
Click to expand...

Not saying you are wrong, but please do share a source.

At 380,000 metric tons, Turkey has some of the world's largest known thorium deposits. These deposits are located near Beylikova-EskiÅŸehir in Central Anatolia. [4] However, no country currently operates a commercial thorium-U233 fuel cycle—India is the closest to doing so, but remains in the early phases of its "three-stage" program. Mining the thorium will therefore remain commercially unattractive for Turkey in the near-term.

India and Australia are believed to possess about 300 000 tTh each, around 25% of the world's thorium reserves. These numbers however vary greatly in the OECD report, which estimates Australia's Reasonably Assured Reserves (RAR) at 19 000 tTh (and not 300 000 tTh as estimated by USGS). The two sources also vary greatly for countries like Brazil, Turkey and Australia. The only country, which seems to unanimously possess large reserves and not as glaringly different, is India (290 000 tTh by USGS; 319 000 tTh by OECD/IAEA).
Click to expand...

Australia is suppose to be second . Turkey does have significant reserves.
Indian reserves are under reported
Many place have thorium deposits that are not being reported. 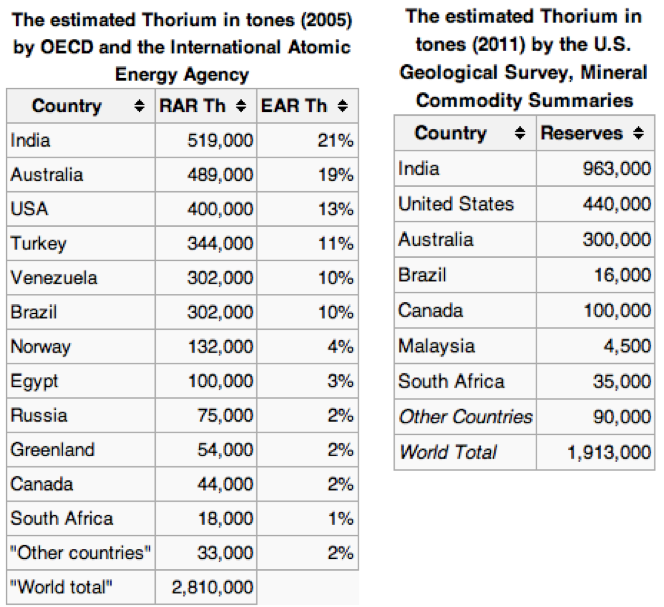 This is beyond awesome!!!

All the thorium abandant nations should come together in further research and development of thoruim based reactors, and relevant mining.

ganesh177 said:
All the thorium abandant nations should come together in further research and development of thoruim based reactors, and relevant mining.
Click to expand...

There is a strong coalition to keep the uranium status quo. There is a tight grip on
Uranium trade. This grip maybe lost if thorium replaces uranium.

Thorium has been used in reactors before.. none are yet in the commertial doman.. all the reactors are Research ones.. This is Another type of Thorium reactor design thats in research

Thorium power is the safer future of nuclear energy

India has the highest monazite reserve in the world with 11.39 million tonnes but stopped production since 2004 after cheap monazite became available from China.
Click to expand...

Wow importing from China is cheaper than producing something that is abundant in our own country o.0 How is that?

India has been a pioneer in thorium research, but haven't seen it to materialize into a nuclear power source, may be another 5 years to get going.
You must log in or register to reply here.
Similar threads
Hasten thorium power generation
Re-fuel Every 100 Years With the New Thorium Car!!!
China blazes trail for 'clean' nuclear power from thorium
Thorium Power Plants Could Solve The World's Energy Problems
Share:
Facebook Twitter Reddit WhatsApp Link