Air India can be utilised to fulfil strategic objectives

Air India is much maligned for its poor state of affairs. It loses a staggering amount of money each year, due to political interference, a bloated and inefficient workforce, corruption, and incompetence/mismanagement. 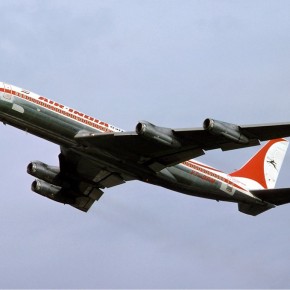 Political interference manifests itself in many ways. Firstly, Air India deals with incredible inefficiency because of the procedures it must deal with as a PSU. A timeless read on this topic is Jitender Bhargava's "The Cost of Being a PSU." A good example of this cost is the recent Boeing 787 fiasco. I have yet to find somebody who can explain to me why the Ministry of Textiles should sign off on Air India's delivery. If the government expects Air India to be run as a business, it must be permitted to act as a business. Once the board has approved compensation and delivery, the matter should be finished.

Political interference can also be found in Air India's route choices, Air India's lack of freedom in hiring/firing employees (hence bloated and inefficient workforce), and corruption throughout the system. A recent audit report on the corruption in the Ministry of Civil Aviation can be found here. It is really mind numbing to see how much Air India is hurt by government corruption.

However, Air India is unlikely to be privatized in the near future for a few reasons. Firstly, it's unlikely that a private investor would want to touch AI in the condition it is in. And secondly, it's unlikely that the government mantris will want to give up one of their playthings. So, with the reality of state-ownership set in, the government should look at how the Maharaja can be better utilized to fulfill State objectives.

Air India already does carry out many functions for the government. Air India is extensively used for armed forces and government charters. The president of India flies exclusively on Air India, and AI does not get compensated properly for such flights. Government estimates show that current president Pratibha Patil's travels have costed Air India almost 170 crores. Air India is also required to keep slack in the schedule for last minute government routing changes, a significant cost to AI.

However, there are ways in which the government can take advantage of Air India's capabilities without destroying AI's profitability. In order to better understand some of these possibilities, we can look at 2 better-run flag carriers - Air China, and Turkish Airlines.

Air China is the official flag carrier and one of many state-owned carriers in China. The airline is, according to the Chinese government, the largest airline in the world by market capitalization, and the most profitable carrier in the world. It is extremely difficult to believe the latter, since Air China is rather inefficient, and it doesn't command very high yields. Regardless, Air China is doing far better than our own Air India, and there are some lessons that can be learned from it.

Any airline's biggest asset is its route network. Commercial air service has a variety of positive benefits - it increases both economic and political ties between the cities served, and can be of great strategic value.

Air China serves many routes which serve a strategic purpose. The most notable is service on the Beijing-Pyongyang sector - Air China is the only non-DPRK carrier to fly to DPRK. This service strengthens ties between the Chinese and North Korean governments and economies, and helps China keep its neighbors close. Air China also serves Ulaan Bator, the capital of Mongolia. This destination keeps the Mongols close to the Chinese.

The Chinese state-owned carriers not only keep their own neighbors close, but they also project China's diplomatic power throughout the world. Apart from Bhutan (which only Bhutanese carriers serve), every neighbor of India has service by a Chinese carrier, an important part of China's strategy to surround India with allies.


Strategic interests aren't just important internationally - Air China's destinations domestically also work to facilitate rapid and comprehensive domestic connectivity, and to bring prosperity to less developed areas. Tibet and Xinjiang, the two areas of China which are seperatist, have lots of air service, helping integrate the areas with the rest of the country.

Another example of a carrier which is utilized by its government well is Turkish Airlines. Unlike Air China or Air India, Turkish is only partly state-owned - 51% of the airline is in private hands. This partial privatization helps cut down on inefficiency and corruption, but still allows the government to utilize the carrier in an effective way.

Turkish's route network contains a variety of routes of strategic importance. The airline serves every Middle Eastern country, bringing Turkey closer to other Arabic countries. Turkish also serves quite a few EU destinations, notably in Germany. This brings Turkey closer to the European countries which Turkey wants to partner with.

However, what is most remarkable about Turkish's route network is how they have linked with countries which Turkey has declared of national strategic importance. Turkey has been working to import raw materials and develop infrastructure in Africa. Turkish not only serves all the major African destinations, like Accra, Addis Ababa, Johannesburg, Cairo, Dakar, Lagos, Khartoum, Tunis, Casablanca, Dar es Salaam, and Tripoli, but it also serves second tier cities too. Turkish serves Sabha, Benghazi, and Misrata (Libya), Abidjan (Ivory Coast), Kinshasa (Congo), Kigali (Rwanda), Mogadishu (Somalia), and Entebbe (Uganda) from its hub in Istanbul, strengthening business and political ties and increasing cultural diffusion (improving soft power).

Turkish also has a very impressive Central Asian route network, a region which India has been working on developing stronger ties with. Almaty and Astana (Kazakhstan), Baku, Ganja, and Nakhchivan (Azerbaijan), Batumi and Tbilisi (Georgia), Bishkek and Osh (Kyrgyztan), Dushanbe (Tajikistan), Tashkent (Uzbekistan), Ashgabat (Turkmenistan), and Ulanbator (Mongolia) are all destinations in the Turkish Airlines network.

After seeing how well other countries use their flag carriers as a tool, we can come back home and compare to Air India. Commercial air service can be used to further India's "Look East" and other international development policies.

Air India already attempts to tailor its route network to serve the government's wishes. Its low cost subsidiary, Air India Express, serves migrant gulf traffic returning home. The carrier has been very successful with the goal, with high load factors. Air India also serves 2 cities of significant strategic interest from its legacy Indian Airlines network - Kabul and Yangon. However, even these cities are underserved (Yangon is only served twice weekly).

In contrast to the limited routes of strategic value, Air India wastes lots of money on politically mandated prestige routes. A loss of $60 million each year is posted on Air India's route to Toronto, yet the route is continued due to political pressure. Politicians want service to Chicago, not Congo, despite the fact that the latter would be a far more useful destination.

It's time that Air India takes a look at the fundamentals of how it crafts its route network. There is no dearth of carriers who can take you from Toronto to Delhi, and the traffic which flies that route is likely to fly regardless of whether Air India is there or not. Where the opportunity for Air India to shine is in routes which require patience and a government cash backstop to develop. Routes which further India's foreign policy aims and bring new economic partnerships.

Alas, the babus and mantris will likely never realize the golden opportunity which they are missing out on.

Rohit Rao is the editor of AeroBlogger, a leading blog on Indian aviation. He is an avid reader on the geopolitical issues which India faces today. You can "like" AeroBlogger on Facebook and follow him on Twitter at @TheAeroBlogger]