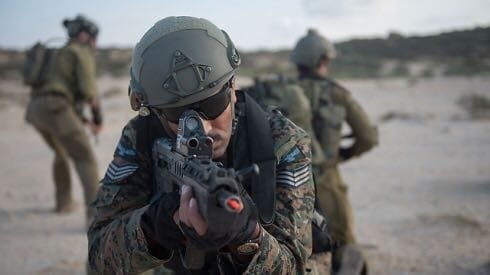 The two commandos held their breath. Vikramaditya quickly turned where he crouched to look up the hill trail at Saraswati’s partially hidden position. She poked out from between an outcrop of rock, her burqa black against the brown stone and painfully blue sky. At that precise moment there was a muffled whump from the higher position. Vikramaditya snapped back to his position just in time to watch an FFV51 high-energy round from Saraswati’s launcher smash into the road inches in front of the first SUV.

The Yoshin Warrior SUV, a rugged, armoured vehicle, launched into the air, its chassis shattering from the explosive shock. It landed roof first on the vehicle behind it in a cloud of smoke. The sickening crunch of metal echoed across the valley.

‘Get the last SUV first!’ Vikramaditya screamed as he and Akeela opened fire, sending a hail of bullets into the third Yongshi Warrior. In front of it, the two vehicles shuddered before the SUV on top came to a rest on its side, hissing smoke and dust.

The two commandos stepped out from their positions and inched forward towards the smoking, mangled mess of the first SUV, firing straight at it, their rounds ricocheting.

Saraswati’s second rocket landed right next to the third SUV with a thundering bang, sending the heavy vehicle spinning off to the side to land on its roof. The blast also yanked the middle SUV off its back wheels, blowing open its rear hatch before it landed with a crunch on the smoking gravel. The blast was so close it flung Vikramaditya and Akeela several feet out before letting them land on their backs. They stared at the sky dazed, their ears ringing, blood rushing to their heads. They slowly scrambled to their feet, picked up their weapons and tottered carefully back towards the smoking heap of SUVs.

Vikramaditya looked at the hills around them. Up in her position, Saraswati dropped the Carl Gustaf and pulled the sniper rifle from the weapons tote, then lay down on her belly to take position. She scanned through the scope at the rising cloud of gun smoke around the three SUVs.


Two loud semi-automatic shots rang out from the direction of the middle SUV, ripping right into Vikramaditya’s right shoulder and arm, throwing him off his feet again. He collapsed on his back, blood spurting from two entry wounds, his flesh burnt and raw. He groaned as Akeela dropped to her feet, firing straight at the driver of the SUV, who was hanging out of his window, bleeding, firing non-stop from his 9mm. Akeela fired a burst, the hail of bullets cutting a line across the SUV door. The last two bullets smashed into the driver’s head, throwing him back.

‘I’m okay,’ Vikramaditya groaned in a blood-soaked wheeze. ‘Stay down. Let SS do this.’

From the last SUV, an SSG soldier who had survived the blast clambered out from the rear hatch. He fired immediately in the general direction of the commandos using his own assault rifle. The soldier took four steps before a sniper round cut him down, the 7.62mm Dragunov round ripping a hole in his neck, sending him crashing to the ground. Three more sniper rounds crashed into the vehicle’s underbelly. Then there was movement in the middle vehicle.

Akeela stepped closer into the smoke, her assault rifle cocked at eye level, her finger on the trigger, ready.

It was Colonel Iqbal. He had opened his door and spilled out from his partially flattened vehicle. His face was also smashed from the twin impact of the rocket and the SUV in front that had crashed into his vehicle. A bleeding mess, he crawled out of the SUV.

‘Keep your hands visible,’ Akeela shouted as she stepped towards him.

‘You’ve killed the girl, you fools! You see that?’
Twisting his body to the side, the bleeding officer raised a trembling hand, pointing behind his smashed SUV at a heap on the floor. ‘You see that? You came for that! And you killed her.’

Excerpted with permission of Juggernaut Books from Operation Jinnah by Shiv Aroor, available in bookstores and on Juggernaut and on Amazon.
Last edited by a moderator: Apr 23, 2020

I regret buying this book. There are some outlandish exaggerations just to make the book more appeasing to the average reader, to the point of tampering with facts.

There were live feed bodycams on NSG in Black Tornado, with collar mikes and what not.

And women are serving in MARCOS, along with a trans guy/girl. Too much SJW shit for my taste.
I stopped reading altogether after two chapters.
Transgenders and women in special forces? Really?

armyofhind said:
I regret buying this book. There are some outlandish exaggerations just to make the book more appeasing to the average reader, to the point of tampering with facts.

There were live feed bodycams on NSG in Black Tornado, with collar mikes and what not.

And women are serving in MARCOS, along with a trans guy/girl. Too much SJW shit for my taste.
I stopped reading altogether after two chapters.
Click to expand...

From what I know, the armed forces only allows men in combat, especially in the NSG and the special forces in India. While the IAF has allowed women fight pilots and the Navy allows women personnel in technical and flying divisions, land forces and spec ops only allow straight men.

This SJW bullshit should be kept away from Indian Army. While I have nothing against homosexuals, it is best we keep the system of selection the way it is, rather than wasting time trying to imitate the socially-bankrupt United States.
Based on excerpts provided by Yusuf, the book is not appealing. If I need to read how Indian armed forces operate using US and western SOPs, then yes, this book will appeal. However, based on my limited interaction with lower ranks in IA who are posted to Indian missions abroad, and interaction with senior active and retired IA officers that I met in casual meetings, dinner, lunches, stay abroad, relative of friends, etc., the desi aspect is missing. The street level understanding and functioning is missing. The Indian armed forces does not operate as shown in Hollywood. The closest you can come to is the dusty, ragged, smelly gangster movies that bollywood provided.

As for female SF, hey I have nothing against it, but due to biological reasons, there are some limitations. Unit leader will opt out of getting a female operative on the field, and no, this does not make him gender prick.
You must log in or register to reply here.
Similar threads
Pakistan interested to convert it's two C 130 aircraft into AC 130 Spooky aircraft for counterinsurgency operations from Afghanistan
Pakistan Army inducts new Dongfeng Menshi armored vehicles for counter-terrorism operations
Economic situation in Western Europe and North America in wake of Russian special military operation in Ukraine
Operation Black Thunder
Share:
Facebook Twitter Reddit WhatsApp Link