The Hydra 70 Folding Fin Rocket (FFR) is a family of unguided rockets offering a variety of warhead and fuzing configurations, from smoke and illumination rounds, to flechettes (hundreds of anti-personnel darts), submunition carriers, and unitary warheads. These versatile and relatively inexpensive rockets can be fired from a variety of aircraft, from attack helicopters to jet fighters to light helicopters. Hydra-70s have seen use in Afghanistan and Iraq, and they are arguably one of the world’s most widely used helicopter-launched weapon systems. The varieties of warheads speak to the versatility of this weapon and are listed below: 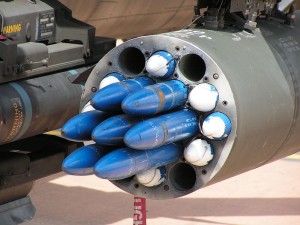 Hydra 70s in an M261 Launcher
A new family of this class of weapon is currently in development that incorporates active guidance that offers significant improvements in cost and weapon effectiveness. With this new capability the weapon helps fill a void in matching weapon capability to particular targets, especially for rotary wing based platforms. Many rotary wing platforms have heavy anti armor or heavy anti-ship based missiles installed and many have a variety of gun installations, both crew served and fixed forward types of installations. Few have the turret mounted guns that are coupled to the electro-optic systems (where you look is where you shoot) due to high cost and maintenance of these systems. All of these weapons rely on the operator to provide the basic guidance for putting the weapon on target by orienting the aircraft to the target. Hydra 70 class rockets have always suffered from a lack of accuracy do to motion of the platform during firing as well as atmosphere conditions. Even with the aid of Continuous Computing Impact Point (CCIP) algorithms assisting the operator inputting the weapon on target, the expected area of impact would vary greatly, often into the 10s of meters. Consequently, many more rockets typically needed to be used to destroy or disable the target.

Now enter the laser/optically guided Hydra. The basic concept is to take an existing Hydra rocket, and add guidance section that has control fins and the ability to guide the weapon all the way to the target. This basically turns the Hydra into a “mini Hellfire” where the rocket uses reflected laser energy or target imagery from the target to provide active guidance to the target. Many countries have seen the threats from terrorism, pirates, and insurgents to become the primary threat to which their militaries must respond. These targets are typically not armored or lightly armored and thus are an ideal candidate for the Hydra to engage. Add the fact that often operating in an environment where minimizing collateral damage is of significant, if not paramount importance, and the active guidance Hydra becomes an ideal weapon of choice. The goal of “1 shot, 1 kill” becomes a very achievable goal which results in an aircraft that can engage multiple targets successfully due to the fact that pods of 7 or 19 rockets can be carried on at least several weapons stations of most rotary wing platforms. When you look at the cost of a Hydra compared to the cost of a Hellfire and the fact you can carry many of them on a helicopter platform the Hydra becomes an excellent relatively low cost option.

This article will focus on several of the most promising variants of this new generation of laser or optically guided Hydra class missiles and provide an overview of their capability.

Prior to my leaving Sikorsky I was fortunate enough to work on some potential upgrades for the S-70B Seahawk helicopter and thus looked at some of the options discussed below. 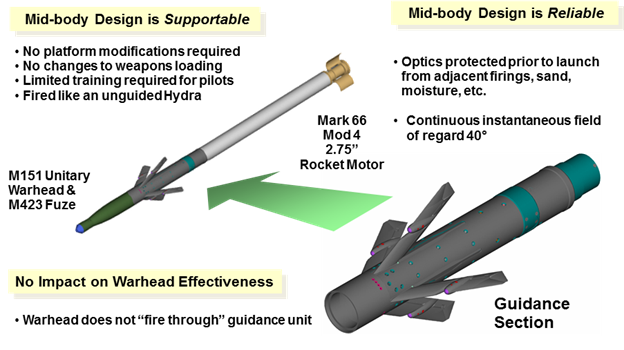 APKWS® Components | Figure 1
The APKWS system is being developed by the USN and BAE systems. Initial operational testing has begun on the MH-60S aircraft and I believe the system may have entered field testing in Afghanistan.

The APKWS has entered Low Rate Initial Production (LRIP) and has shown excellent results in testing. Results from contractor testing shows an average laser spot to impact distance of .44 meters or 1.44 feet, well within the 2 meters performance parameter desired.

The approach used by BAE for this class of laser guided Hydra is shown below in Figure 1. How the addition of laser detection and guidance function in the APKWS is depicted in Figure 2. Desired performance parameters are shown in Figure 3. 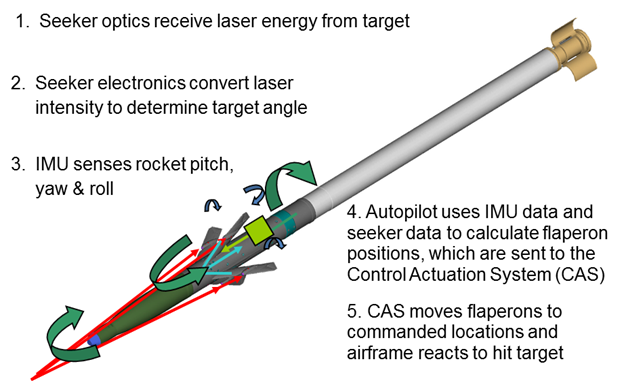 APKWS® How It Works | Figure 2 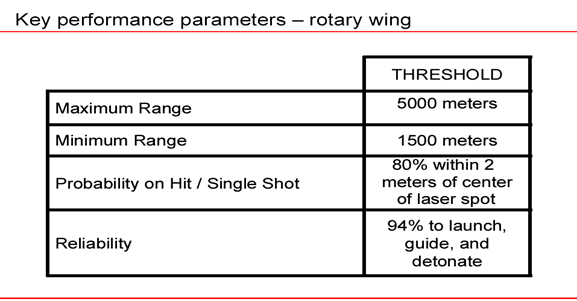 The DAGR system is being developed by the Lockheed Martin using a similar approach and active guidance to the APKWS, namely inserting a guidance unit between the warhead and the missile after body. Lockheed took an innovative and low cost approach by developing the missile and launching mechanism to allow it to attach to both an M299 launcher (used for Hellfire missiles) or pylon mounted station and thus provide a relatively easy way to incorporate the missile onto an aircraft. 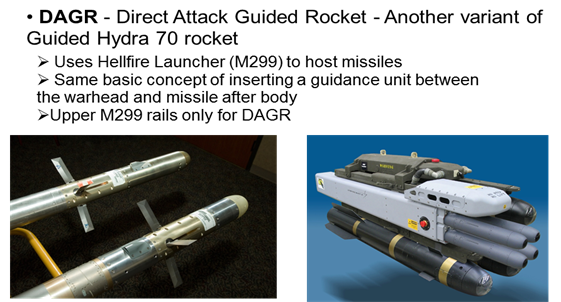 DAGR - Variant of Hydra 70 | Figure 5
Aircraft that already have Hellfire launch capability could ideally, with minimal changes to the weapons system, incorporate the DAGR and utilize much of the existing aircraft installation and Hellfire mission software since the DAGR would appear to be a Hellfire missile and be launched in the same manner. More sophisticated installations could allow the DAGR pod to identify the missile as a DAGR for ease in crew operations. It all depends on much sophistication and integration a particular customer would want. Figures 5 and 6 provide some information on the DAGR system. 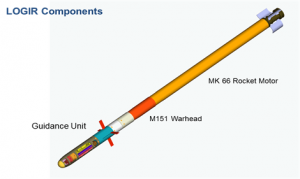 LOGIR Components | Figure 7
The LOGIR system is being developed by the USN in conjunction with the republic of Korea. This weapon uses a different method for providing guidance to the target. At the time of firing the targets position and velocity vector are transferred to the missile to provide the ability to navigate the target area and then a target recognition algorithm is used to provide terminal area guidance to the target.

This weapon obviously requires imagery of the target and thus the use of a FLIR or high resolution camera system would be required to be installed on the aircraft. Advantages are that this is a truly “fire and forget” weapon that does not require active guidance to the target (as opposed to the previous two systems discussed) since it uses target position and speed as inputs to continuously calculate target position and then target imagery to guide itself to the target. Note the guidance unit for the LOGIR is installed at the front of the missile as opposed to the mid body insertion approach used in other systems. The components and general structure of a LOGIR missile are shown in Figure 7.

The technical goals of the program are noted below.

Goals of the LOGIR Program
The elements that make up a LOGIR system as well as the methodology used to attack a target are shown in Figure 8. Note that the “Pop Up” maneuver to designate and fire the weapon also offers a reduced time frame that the aircraft is exposed to ground based potential threats. 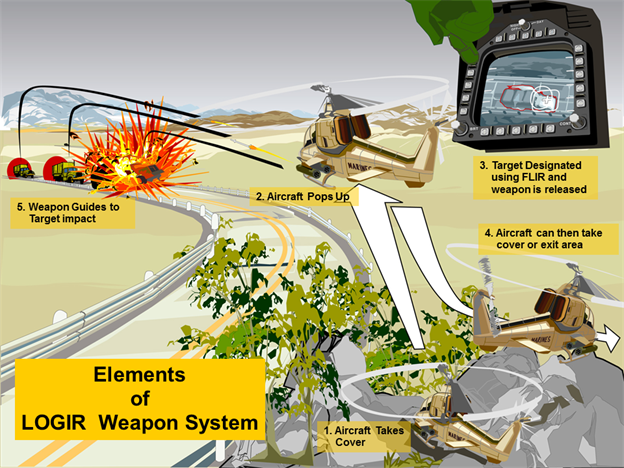 A discussion on this subject would not be complete without discussing advances in launcher technology for these new “Smart Rockets”. The existing M260 (7 shot) and M262 (19 shot) rocket launchers are typically used to fire the existing unguided Hydro rockets (LAU 60 and LAU 68 are similar models). However, due to the addition of the guidance units in variants like the APKWS or LOGIR, an Extended Length Launcher (ELL) is being developed to fire these new variants. (For the LOGIR I am unsure of the interface required to support both the download of target position and speed as well as target imagery. This may be incorporated into the ELL that is being developed.) These are currently being developed by the USN to support these new longer Hydra missiles. These launchers all provide a basic launch capability but do not provide an integrated solution where the operator can perform missile coding, inventory, or test. All missiles must have any desired settings (such as laser codes) prior to the missile being loaded. 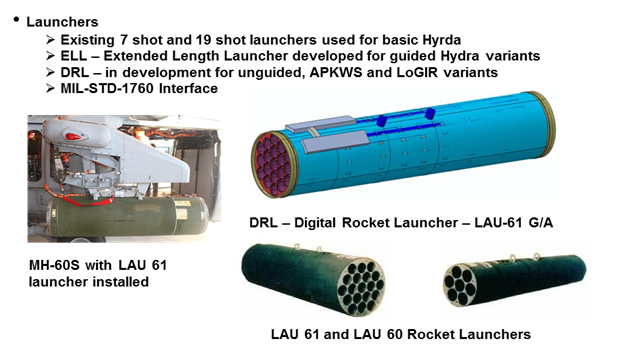 Hydra - Launcher Technology | Figure 9
To solve this problem a Digital Rocket Launcher, or DRL, is also being developed by the USN to provide a more integrated solution to using these new generation weapons. The DRL will have a standard MIL-STD 1760 interface for power and communications.

With this comes a MIL-STD 1553B communications interface that will allow the computing resource in the launcher to see all the missiles and provide the operator with all the capability to perform pre-flight inventory, settings, and desired maintenance testing. This launcher is still in development with no time frame for operational use, but it is this author’s opinion that is where this weapons system will be going in the future. Figure 9 provides some basic information and pictures on the old and new Hydra rocket launchers.

The 2.75” (70 m) Hydra series of FFRs is being given new life with an addition of an active guidance capability to the rocket system. With the advent and evolution of new threats for today’s military services, it is filling a weapons void in the rotary wing platform for targets that are typically not highly armored. Now a highly accurate rocket system will be available for use at a cost that is a fraction of the cost of larger rocket systems such as the Hellfire. It combines low collateral damage with the platforms ability to carry relatively large numbers of these weapons thus increasing and advancing the platforms versatility and capability. For this author, I would say that any country today should be very interested in acquiring this capability for their new platform acquisition plans as the initial cost and life cycle maintenance are relatively low to other weapons systems. I believe it would be an ideal addition to whatever candidate is chosen for India MRH helicopter competition as a weapons upgrade option.

Richard (Rik) Lammers is a retired principal engineer from Sikorsky Aircraft with over 33 years of experience in the implementation and management of systems & software design and integration of Flight Management, Mission Management, and Weapons Management systems for both commercial and military aircraft. The first 5 years working at Sperry Flight Systems in Phoenix, AZ (now Honeywell) on the Boeing 757 & 767 Flight Management and Electronic Flight Instrumentation (EFIS) Systems. The last 28 years at Sikorsky Aircraft in Stratford, CT working extensively on the S-70B and predecessor aircraft with the last 7 years being spent as a system, software, and integration lead and contract manager for weapons systems on the S-70B.