USS Zumwalt (DDG-1000) is the U.S. Navy's newest destoyer and is the lead ship of the Zumwalt class. Shots include exterior and interior footage - berthing, head, mess deck, bridge, engineering, medical, and other ships spaces. Filmed on May 8, 2017.

asianobserve said:
USS Zumwalt (DDG-1000) is the U.S. Navy's newest destoyer and is the lead ship of the Zumwalt class. Shots include exterior and interior footage - berthing, head, mess deck, bridge, engineering, medical, and other ships spaces. Filmed on May 8, 2017.

Well that is the kind of gaming setup i crave for,thats like more than dozen monitors 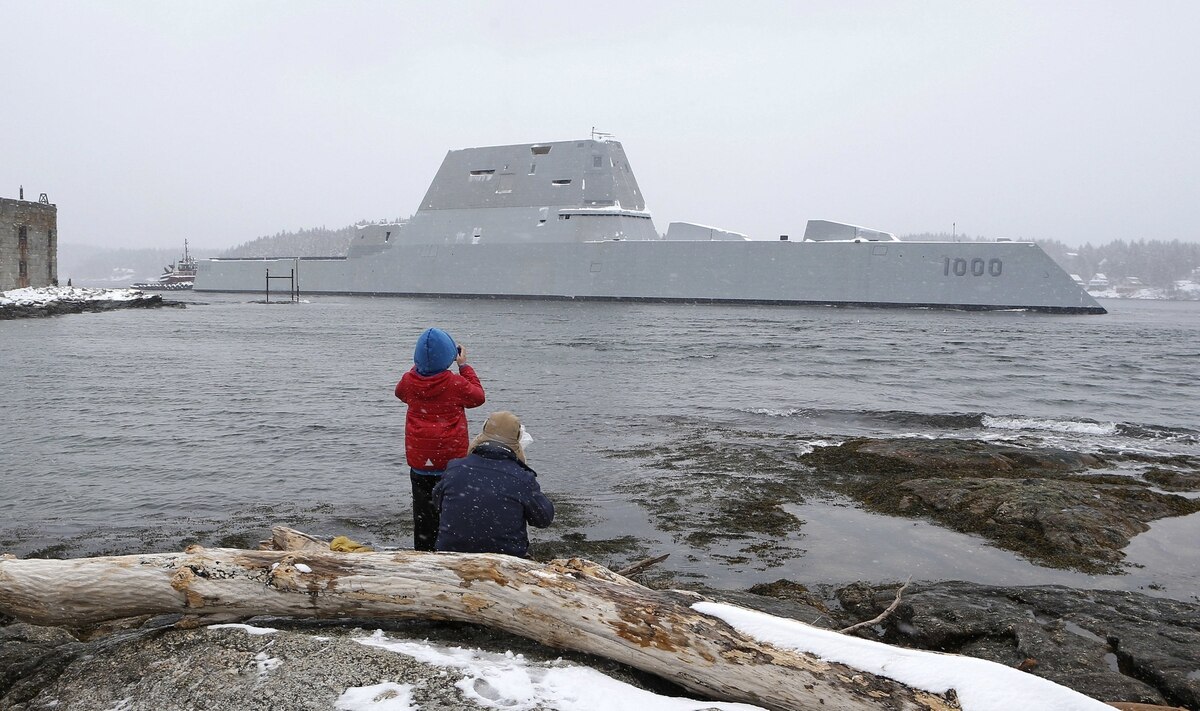 After years of stability questions about the hull design for the U.S. Navy’s new three-ship class of stealth destroyers, the commanding officer of the lead ship, USS Zumwalt, is satisfied: It handles the seas as well, if not better, than previous classes of surface combatants.

While underway last spring, Capt. Andrew Carlson and the crew of Zumwalt took the ship to Alaska, where they got to experience some heavy seas.

"We took advantage of a storm up near Alaska that presented us with Sea State Six conditions,” said Carlson, referring to sea’s waves between 13 and 20 feet high. “All told I’d rather be on that ship than any other ship I’ve been on.”

The seas were so high at one point he called down to his executive officer to tell him the ship had hit Sea State Six, but his XO said that based on the rolls he was feeling in his cabin, it couldn’t be more than Sea State Three, a more tranquil 1- to 4-foot height measurement.

That’s due to the way the tumblehome hull design was built, righting itself much more quickly that previous classes of ship.

“You definitely have to get used to the roll, which is very short compared to other ships,” Carlson said. “For those of us who have been on cruisers, especially up top, you kind of lean over 15 degrees and you wonder if you are going to come back. We didn’t experience any of that. As long as you get used to the finer oscillation, it really handles very well."

Carlson, who discussed the ship’s design with Defense News at the annual Surface Navy Association meeting, said traversing through rough weather was part of ongoing stability testing, which he said is about 60-70 percent complete.

“The biggest known variable for these stability tests is the weather,” Carlson said. “So we’ve had days where we wanted to do calm water trials and there are white caps, so its not calm enough for us to get the right data.

“In this case we were looking for bad weather and we were able to [a] leverage storm system up near the Gulf of Alaska that had substantial wave action hundreds of miles away from that — still tenable without any risk to the ship. And this happened over several days, so every watch team got to drive circles, drive straight lines and measure out how the ship responded.”

The quick-righting hull is something a crew gets in every sea state, not just in stormy seas, he said.

“It’s just a much tighter periodicity in the roll, and a lot of that has to do with the rigidness and the stability of how the ship is built,” Carlson said. “But that’s something we’ve experienced in other sea states. You don’t have to have extravagant wave action to realize that the ship rights herself very quickly.”

“It was an odd feeling at first,” he added. “The first time I was on the bridge as a newly reported sailor, not yet assumed the job of executive office, we had some speed on and the officer of the deck ordered a large rudder.

“And I intuitively thought, ‘I’m going to need to lean into this turn’ — you almost fall the other way because the ship doesn’t heel in the same way. Some of that is the hull form, some of that is the relative location of the rudder stops, the size of the propellers.”

It also took Carlson some time to get used to how Zumwalt handles turns.


“She generally slides more than cuts into the water,” Carlson said. “It’s actually more fun. There’s a little bit of ‘Tokyo Drift’ going on where you can really get a faster turn on with harder rudder, but still very stable. It’s not like you are tumbling around," he said. “When we were up in those big waves, the bow was piercing through; you’re getting some of that water coming up. You still pitch, it’s just not nearly the same."

Another feature familiar to sailors on the surface combatants is also conspicuously absent: The shimmy and shake that comes when the nose goes into a wave and water rushes off the bow, through the bullnose and around the sonar dome.

“There’s none of that: You pitch up and you pitch down,” he said. “It’s a better ride.”