BEIJING—Wages in China continued to climb at a double-digit pace last year despite slower economic growth. 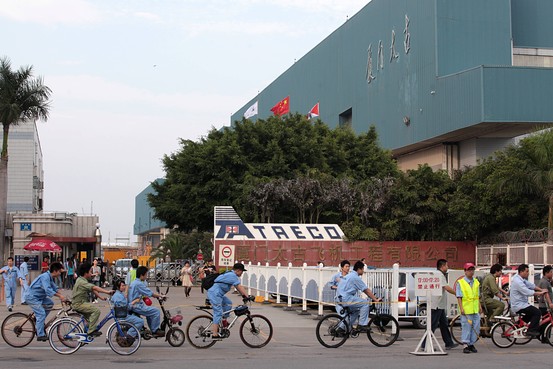 Workers getting around at an aircraft-maintenance company in Fujian province; real wage growth in China accelerated last year even as economic growth slowed.

The continued rise in wages, even as China's economic growth slowed to 7.8% last year from 9.3% in 2011, is likely to put fresh pressure on manufacturers already pinched by deteriorating profits, especially in low-end and labor-intensive industries.

The statistics bureau said "there was still a significant gap among regions, industries and specific jobs in some sectors," with wages in manufacturing and construction, which account for 41.2% of all employees, still well below the overall average.

Nominal wages at nonprivate enterprises were up 13.6% in both the manufacturing and construction sectors, to 41,650 yuan and 36,483 yuan, respectively.

Wages were up 16.5% in the nonprivate category combining agriculture, forestry, animal husbandry and fishery, though the absolute annual wage level was the lowest of all categories at 22,687 yuan. The highest annual wages were in the finance sector where the average was 89,743 yuan, up 10.6%.

"China will continue to deepen its reforms of income distribution, improve its wage mechanisms and establish a normal wage increase system to help middle and low income people," the bureau said.

When the economy does well, the it natural for aspiration to rise and so higher wages are a correct step.

Lots of manufacture already moved into tier3-4 cities of inland China. And those cities still have better infrastructure than most developing nations like India, now it's Inland China vs other Developing nations. The tier 1 cities is fast approaching to low-income developed nations.

for a country that has real growth of economy this is inevetable.

but policies should be made to help private owned companies and companies in the west of prc.

when you talking about average salary companeies of the east and from state owned can make the figure seem a little bit of distorted.
You must log in or register to reply here.
Similar threads
U.S.-China Climate Deal Puts India in Spotlight-WSJ
WSJ: Yes, It's True, China is Launching a 24-Hour Panda Cam
WSJ: China: A Billion Strong but Short on Workers
WSJ: China Manufacturers Survive by Moving to Asian Neighbors
Share:
Facebook Twitter Reddit WhatsApp Link