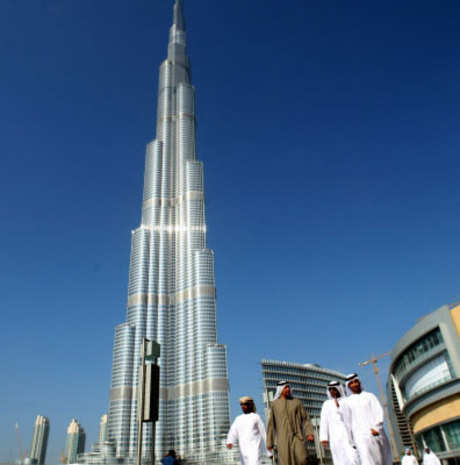 DUBAI: Blazing fireworks and dazzling lights marked the opening of the world's tallest tower, Burj Dubai, which the Gulf Emirates hopes will pep
up its international image, shaken by debt woes.

The $1.5 billion structure, an "unprecedented" engineering marvel that was thrown open to the public today, was built with a major contribution from India, a vast labour force.

The steel and glass tower was opened by Dubai's ruler Sheikh Mohammad Bin Rashid al Maktoum, who also lifted the veil on a closely guarded secret of its final height.

"Emirates has made a mark on the world and Dubai has built something for the world that is built by human beings," Sheikh Mohammed said while announcing the tower open. The paratroopers then came down to greet onlookers.

The launch coincided with the fourth ascencion to the throne of Sheikh Mohammed bin Rashid Al Maktoum. The Burj Dubai Metro station also opened today to mark the launch.

Declaring that the tower is 818 metres (2,684 feet) high, he said the new building pips all its nearest rivals, including the 101-storey high Taipei Tower in Taiwan.

Sheikh Mohammad inaugurated the tower in a colourful ceremony featuring dazzling laser lights, fireworks display and a choreographed water display on the Dubai fountains which stretch for 275 metres at the foot of the tower.

The Dubai Burj's record seeking builders are also boasting of the highest occupied floor of any building in the world and today the needle-shaped tower ranks taller than north Dakota's Television mast.

A multimedia presentation witnessed by Dubai's ruler and thousands of onlookers at the base of the tower said the building was 2717 feet tall.

Dubai is opening the tower in the midst of a deep financial crisis. Its oil rich neighbor Abu Dhabi has pumped billions of dollars in bailout funds into the emirate as it struggles to pay its debts.

Sheik Khalifa bin Zayed Al Nahyan is the ruler of Abu Dhabi and serves as the president of the United Arab Emirates, the federation of seven small emirates, including Dubai and Abu Dhabi.

Analysts have questioned what Dubai might need to offer in exchange for the financial support it has received from Abu Dhabi, which controls nearly all of the UAE's oil wealth. Abu Dhabi provided direct and indirect injections totaling $25 billion last year as Dubai's debt problems deepened.

The developer of the newly opened tower said it cost about $1.5 billion to build the tapering metal-and-glass spire billed as a "vertical city" of luxury apartments and offices. It boasts four swimming pools, a private library and a hotel designed by Giorgio Armani.

Cleaning crews were busy scrubbing windows and sweeping the plaza at the tower's base just hours before festivities began.

Dubai was little more than a sleepy fishing village a generation ago but it boomed into the Middle East's commercial hub over the past two decades on the back of business-friendly trading policies, relative security, and vast amounts of overseas investment.
Then property prices in parts of sheikdom collapsed by nearly half over the past year. Now Dubai is mired in debt and many buildings sit largely empty — the result of overbuilding during a property bubble that has since burst.

Despite the past year of hardships, the tower's developer and other officials were in a festive mood, trying to bring the world's focus on Dubai's future potential rather than past mistakes.

"Crises come and go. And cities move on," Mohammed Alabbar, chairman of the tower's developer Emaar Properties, told reporters before the inauguration. "You have to move on. Because if you stop taking decisions, you stop growing."

Dubai, which has little oil of its own, relied on cheap loans to pump up its international clout during the frenzied boom years.

But like many overextended homeowners, the emirate and its state-backed companies borrowed too heavily and then struggled to keep up with payments as the financial crisis intensified and credit markets froze up.

Meanwhile, speculators who had fueled Dubai's property bubble disappeared along with the easy money, revealing a glut of brand-new but empty homes and crippling many of the emirate's property developers.

It got some succor from a $10 billion bailout provided by its richer neighbor and UAE capital Abu Dhabi last month. That was on top of $15 billion in emergency funds provided by Abu Dhabi-based financiers earlier in the year.

Burj developer Emaar is itself partly owned by the Dubai government, but is not part of struggling Dubai World, which has investments ranging from Dubai's manmade islands and seaports to luxury retailer Barneys New York and the oceanliner Queen Elizabeth 2.

Emaar's Alabbar said the landmark Burj is 90 percent sold in a mix of residential units, offices and other space, offering a counterpoint to Dubai's financial woes.
The Burj vanquished its nearest rival, the Taipei 101 in Taiwan. But the tower's record-seeking developers didn't stop there.

The building boasts the most stories and highest occupied floor of any building in the world, and ranks as the world's tallest structure, beating out a television mast in North Dakota. It also has the world's highest observation deck.

"We weren't sure how high we could go," said Bill Baker, the building's structural engineer, who is in Dubai for the inauguration. "It was kind of an exploration ... A learning experience."

Baker, of Chicago-based architecture and engineering firm Skidmore, Owings & Merrill, said early designs for the Burj had it edging out the world's previous record-holder, the Taipei 101, by about 33 feet. The Taiwan tower rises 1,667 feet.

Confidence in safety
Work on the Burj began in 2004 and moved ahead rapidly. At times, new floors were being added almost every three days, reflecting Dubai's raging push to reshape itself into a cosmopolitan urban giant packed with skyscrapers.

The Burj's developers say they are confident in the safety of the tower, which is more than twice the height of New York's Empire State Building's roof.

Greg Sang, Emaar's director of projects, said the Burj has "refuge floors" at 25 to 30 story intervals that are more fire resistant and have separate air supplies in case of emergency. And its reinforced concrete structure, he said, makes it stronger than steel-frame skyscrapers.

"It's a lot more robust," he said. "A plane won't be able to slice through the Burj like it did through the steel columns of the World Trade Center."

During the busiest construction periods, some 12,000 workers labored at the tower each day, according to Emaar. Low-wage migrant workers from the Indian subcontinent provided much of the muscle for the Burj and many of Dubai's other building projects.

The tower is more than 50 stories higher than Chicago's Willis Tower, the tallest building in the U.S. formerly known as the Sears Tower.

Condo prices have halved
At their peak, some apartments in the Burj were selling for more than $1,900 per square foot, though they now can go for less than half that, said Heather Wipperman Amiji, chief executive of Dubai real estate consultancy Investment Boutique.

She said some buyers may struggle to find tenants at going rates once the tower's expected high service charges are factored in.

"The investment community is quite divided," she said. "They're not sure how it's going to play out."

The Burj is the centerpiece of a 500-acre development that officials hope will become a new central residential and commercial district in this sprawling and often disconnected city. It is flanked by dozens of smaller but brand-new skyscrapers and the Middle East's largest shopping mall.
That layout — as the core of a lower-rise skyline — lets the Burj stand out prominently against the horizon. It is visible across dozens of miles of rolling sand dunes outside Dubai. From the air, the spire appears as an almost solitary, slender needle reaching high into the sky.

An observation deck on the 124th floor opens to the public Tuesday, with adult tickets starting at 100 dirhams, or just over $27 apiece. The ride to the top took just over a minute during a visit for journalists early Monday morning.

Dubai landmarks like the sail-shaped Burj al-Arab hotel and the manmade Palm Jumeirah island were visible through the haze.

The Burj itself cast a sundial-like shadow over low-rise houses and empty sand-covered lots stretching toward the azure Persian Gulf waters. And yes, Dubai is still open for business: there are gift shops at the base and the top.

Copyright 2009 The Associated Press. All rights reserved. This material may not be published, broadcast, rewritten or redistributed.
URL: Tallest building opens, and is renamed - Mideast/N. Africa - msnbc.com