Omar al-Bashir is the first sitting president to be indicted for crimes against humanity and war crimes. Critics worry the move could destabilize the country.


JOHANNESBURG, South Africa - Sudan's president Omar al-Bashir on Wednesday became the first sitting head of state to be charged with war crimes and crimes against humanity.

At a press conference held at The Hague, Netherlands, The International Criminal Court (ICC) announced its indictment of Mr. Bashir for a range of crimes, including the deliberate attempt to destroy ethnic groups deemed to be supporting rebel factions in Sudan's troubled Darfur region.

"He is suspected of being criminally responsible ... for intentionally directing attacks against an important part of the civilian population of Darfur, Sudan; murdering, exterminating, raping, torturing, and forcibly transferring large numbers of civilians, and pillaging their property," said ICC spokeswoman Laurence Blairon.

The three-judge panel said there was insufficient evidence to support the more controversial charges of genocide, however.

Nearly 300,000 Darfuris have died in the past six years of conflict, either in combat or through starvation and premature death due to displacement. The United Nations estimates that nearly 2.5 million Darfuris have been forced to flee their homes because of the fighting. Bashir's government denies ordering the deliberate murder of civilians in Darfur, and says that the death toll is much lower than the UN and the ICC estimates.

"This is a significant step for the hundreds of thousands of victims of conflict in the past six years," says Ariela Blatter, senior director for international programs at Amnesty International in Washington. "The fact that the ICC issued an arrest warrant for a sitting head of state is a signal to Bashir that there is no 'get out of jail free card here.' "

The indictment comes at a time of great political instability in Sudan. Darfur rebels are expanding their operations into neighboring states as the country prepares for crucial national elections this year. And relations between Khartoum and the semiautonomous southern portion of Sudan are coming under increasing strain.

Campaigning for his National Congress Party (NCP) outside Khartoum on Tuesday, President Bashir discounted the importance of the ICC's looming decision, saying that the Court could "eat" the indictment. Vice President Salva Kiir, a former southern rebel leader who now shares power with Bashir in a coalition government, struck a more conciliatory line.

"In the event of the court agreeing with the chief prosecutor," Mr. Kiir said on Tuesday, "the [Sudan People's Liberation Movement] will work with its partners in the NCP on how to politically and diplomatically handle the decision of the court." He urged the international community to remain engaged in Sudan, whatever the decision, warning, "The collapse of peace in Sudan shall not only hurt the Sudan itself, but shall also have serious repercussions in the region."

Beset by a north-south civil war for nearly 20 years, which claimed millions of lives, Bashir ended it in 2003 by signing a comprehensive peace accord and agreeing to share power in a coalition government with the southern rebel movement, the Sudanese People's Liberation Army. Despite Mr. Kiir's reassuring words, some experts worry that the peace deal could be dealt a fatal blow, as well as similar peace talks with Darfur rebels, if SPLA leaders deem Bashir's government to be on its way out.

For this reason, leaders of the African Union and the Arab League have been working furiously to persuade the United Nations Security Council to encourage the international court to delay its indictment and arrest warrant for at least a year. This, many African leaders believe, would give enough time for current peace talks with Darfur-based rebels to begin to bear fruit.

But human rights groups insist the world should support the ICC's ruling. "The international community should affirm its support for the court and insist that Sudan and other countries cooperate with it as required by the UN Security Council," says Nick Grono, deputy president of the Brussels-based International Crisis Group. 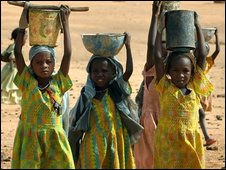 Aid workers fear for Darfur camps after ICC decision​
Aid groups ordered out of Darfur's region of Sudan have expressed concern over the potential impact of the move on thousands of displaced people.

The order follows the decision by the International Criminal Court to issue an arrest warrant for the Sudanese President, Omar al-Bashir.

He is charged with responsibility for atrocities and war crimes committed in Darfur over the past six years.

But the African Union says it will ask the UN to defer the warrant for a year.

Among the international aid groups ordered out of Darfur are Oxfam, Care, Medecins Sans Frontieres and Save the Children UK.

Sarah Jacobs of Save the Children Africa told the BBC that children in Sudan would suffer if the charity was prevented from operating in the country.

"We support 50,000 children, trying to protect them from abuse, from physical and sexual violence, trying to get them back into school," she said.

"These are very traumatised children, many of them, and it's essential that Save the Children UK and other aid organisations are able to deliver essential aid to communities, otherwise life is going to get even worse for them."

"Our job now is to make sure that we appeal against that request and that we stay to support the children that we're looking after across the country."

A spokesman for Oxfam in neighbouring Kenya, Alun McDonald, said Oxfam was also appealing against the expulsion decision and hoped things could be resolved. 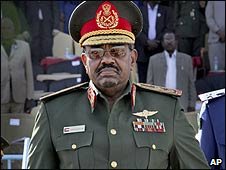 Mr Bashir is charged with war crimes and crimes against humanity​
He said Oxfam had not been given a deadline to leave by the Sudanese authorities and Oxfam workers in the country would stay at home in the hope that they might be able to resume work in the future.

"We are delivering mainly water and sanitation to 600,000 people," said Mr McDonald.

"The people of Darfur have suffered terrible violence. They are living in camps in pretty desperate conditions. If we are forced to leave, people will have to go without water, sanitation, food medicine... lots of vital services."

But some Sudanese government officials have accused humanitarian organisations of using aid as a cover to achieve a political agenda.

Abdalmahmood Abdalhaleem Mohamed, Sudan's ambassador at the UN, said the country would "deal very clearly with any organisation that is violating the hospitality of the country".

Sudan's deputy permanent representative to the AU, Akuei Bona Malwal, told the BBC that the agencies had been "deemed to have worked beyond the permit that was given to them".

He said it was a "coincidence" that the agencies had been expelled on the same day as the ICC issued the warrant.

Vanessa Van Schoor, Medicin Sans Frontieres' operation manager in Sudan, said that while she could say whether the expulsion were directly connected to the ICC's announcement, the order to leave came within half an hour of the ICC's news conference.

Ms Van Schoor denied that MSF staff were in Sudan for anything other than medical purposes, and said the agency had always worked in "full transparency" with the Sudanese government.

"Yet for some reason, they've chosen to throw us out of the country," she said.

"We're lost. We don't understand how this political judicial process has meant that delivery of food, healthcare and water supply is put in jeopardy."

The conflict in Darfur flared into open violence in 2003 when rebel groups took up arms against the government in Khartoum, complaining of discrimination and neglect.

Mr Bashir has been charged by the ICC with two counts of war crimes: intentionally directing attacks against civilians and pillaging.

The arrest warrant has been greeted by human rights groups as a step towards justice for the 300,000 people the UN says have died and the nearly three million who have fled their homes as a result of the conflict in Dafur.

But it has been criticised by many in Sudan and by groups including the AU and the Arab League, which have agreed to send a joint delegation to the New York to press the UN Security Council to delay the indictment.


Thousands of Sudanese on Wednesday held a rally at the capital's Council of Ministers in response to the arrest warrant issued by the International Criminal Court's (ICC) to President Omar al-Bashir earlier in the day.

The majority of the rally are the country's civil servants, an organizer at the scene told Xinhua.

Witnesses said security was beefed up around foreign embassies while the protestors took to the streets of the capital. 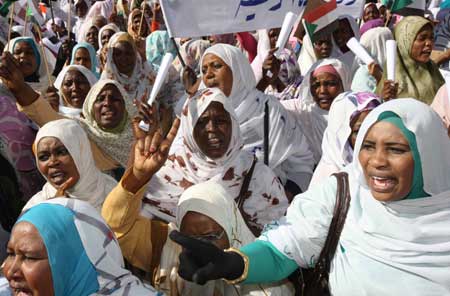 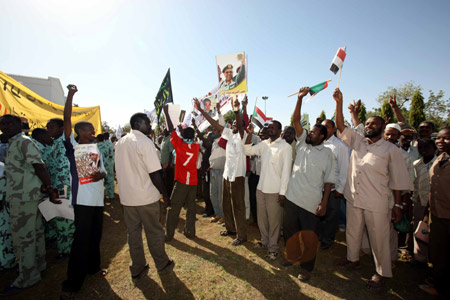 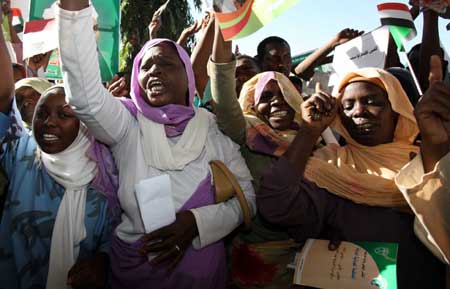 Protestors take part in a rally supporting Sudanese President
Omar al-Beshir in Khartoum, capital of Sudan, March 4, 2009.
Thousands of protestors massed in Khartoum Wednesday to protest
at the International Criminal Court (ICC)'s arrest warrant against Beshir.
ICC said on Wednesday it has issued an arrest warrant for Beshir for war
crimes and crimes against humanity in Darfur.​

The ICC on Wednesday issued an arrest warrant against Sudanese President Omar al-Bashir for war crimes and crimes against humanity in the country's restive western region of Darfur.

The genocide accusation, filed by the court's prosecutor Luis Moreno-Ocampo, was not included in the final decision.

Earlier on Tuesday, President al-Bashir vowed that any decision to be issued by the ICC will not affect his country.

"The Sudanese people do not care the decision," he said.

The Internation Court of Justice Makes me Laugh! Its a Big Laughter Club, with some serious looking guys and gals! What have these guys done since inception to save the millions being killed everywhere, from bosnia to palestine, to darfur to timbaktu! Its a Farce, its just nothing but a farce!

ahmedsid said:
The Internation Court of Justice Makes me Laugh! Its a Big Laughter Club, with some serious looking guys and gals! What have these guys done since inception to save the millions being killed everywhere, from bosnia to palestine, to darfur to timbaktu! Its a Farce, its just nothing but a farce!
Click to expand...

I think the ICC is more than just a farce. It is a convenient tool to evict dictators once their purpose is served- under the guise of 'morality' and 'international law'- or to silence forever those that can't be otherwise disposed off. After all, what better backing is there than the weight of international opinion and the law?
You must log in or register to reply here.
Similar threads
Why do US courts keep issuing Notices to the whole world?
The World Powers Court Central Asia
innovation and discovery around the world
India’s Gautam Adani Passes Warren Buffett To Become World’s 5th Richest Person
Share:
Facebook Twitter Reddit WhatsApp Link