A therapist pours alcohol over a patient and sets him alight -- for some in China, playing with fire is a treatment for illness.

So-called "fire therapy", which proponents claim can cure stress, indigestion, infertility and even cancer, has been used for hundreds of years and recently garnered a blaze of attention in Chinese media.

There is no orthodox medical evidence that it is effective, a fact that matters little to one of China's most prominent fire therapists.

"Fire therapy is the fourth revolution in human history... it surpasses both Chinese and Western medicine," said Zhang Fenghao, who trains students at a dingy apartment in Beijing and charges around 300 yuan ($48) per hour for treatment.

He applied a herbal paste to a patient's back, covered it with a towel and poured on water and a 95% rubbing alcohol, adding proudly: "Using this method, patients can avoid operations."


The man, Qi Lijun, lay on his front placidly as Zhang flicked a cigarette lighter, igniting a miniature inferno of orange and blue flames dancing above his spine.

"It feels warm, not painful, just warm," said the 47-year-old, who recently suffered a brain haemorrhage that affected his memory and mobility. "I think it's effective."

Zhao Jing, 49, who suffers from chronic back pain, had at first been shocked by the idea of the treatment, but added: "After learning everything I don't have fears any more."

The practice is based on Chinese folk beliefs that health depends on maintaining a balance of "hot" and "cold" elements within the body.

"We start a fire on top of the body, which gets rid of cold inside the body," said Zhang, who claims to have lit blazes on foreign diplomats and senior Chinese officials.

The treatment gained renewed public attention this month when photos of a man having fire applied to his crotch went viral on Chinese social media.

"Sir, how well would you like your meat cooked?" joked one microblogger on China's Twitter-like Sina Weibo.

Burning question
State media have sought to dampen down enthusiasm for fire therapy, running several reports on shady therapists, some without certification and employing only a bucket of water to prevent conflagrations.

"There have been injuries, patients have been burned on their faces and bodies, because of a lack of standards," said Zhang. "I have taught tens of thousands of students, and we have never seen an accident."

So far the practice has received little attention from medical journals, but the theory behind it bears some relation to the Chinese medicinal practice of "cupping", where a flame burns away the oxygen inside a receptacle to create pressure on parts of a patient's body.

Several long-term studies of that supposed therapy have found little evidence of any effectiveness.

Zhang has received some recognition from publications covering "traditional Chinese medicine", which is widely available in the country's hospitals.

The industry is lucrative, producing goods worth 516 billion yuan ($84 billion) in 2012, according to official statistics.

Looking out from behind his patient's burning back, Zhang recited a poem.

"A fire dragon has come to earth/a mysterious therapy has its birth," he said, as flames jumped below his chin.

"Medicine needs a revolution, fire therapy for the world is the solution." 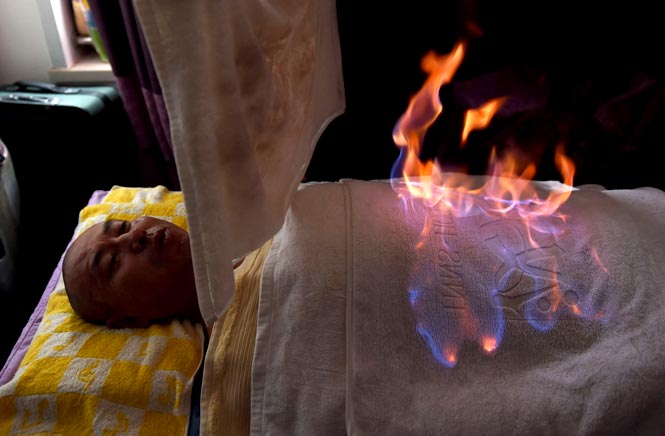 A patient undergoes 'fire therapy' at an apartment in Beijing. A therapist pours alcohol over a patient and sets him alight -- for some in China, playing with fire is a treatment for illness.