Will support US, Nato or Indian intervention: Brahamdagh Bugti 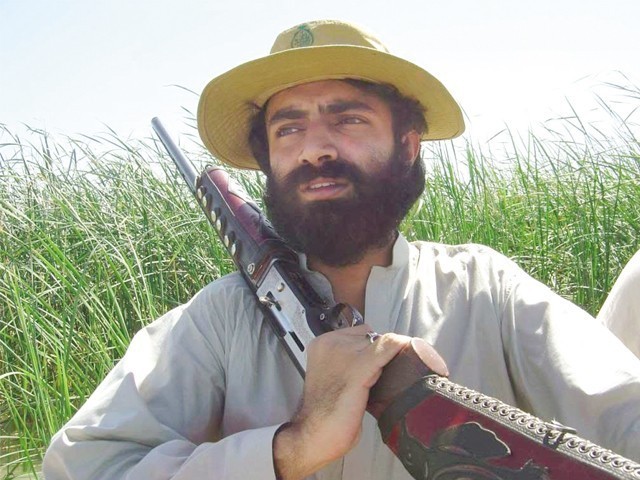 QUETTA: Supporting the US congressional bill on Balochistan, Baloch Republican Party's self-exiled chief Brahamdagh Bugti has welcomed all foreign intervention in the province whether it is by the US, Nato or India.

"America must intervene in Balochistan and stop the ethnic cleansing of Baloch people," said Brahamdagh, 30, as reporters listened with rapt attention to his telephonic address on Wednesday at the Quetta Press Club. "We know that foreign countries have their personal interest but we must think of our greater interest."
A resolution was introduced on February 17 by Congressman Dana Rohrabacher and co-sponsored by two other congressmen in the US House of Representatives, calling upon Pakistan to recognise the Baloch people's right to self determination. The bill has outraged Pakistan and leaders and lawmakers have called it against the country's sovereignty and an unwelcome intervention by the US.
"Baloch women, political leaders, activists, students, writers, poets, professors and intellectuals are being subjected to enforced disappearances and undergoing torture for years. Their mutilated bodies turn up daily. Under such circumstances, we will welcome the support of foreign countries," he said. "We have been accused of getting support from India but the Baloch movement does not have any foreign support. However, we will welcome any support for independence."
Balochistan, Pakistan's least developed but largest province by area, has undergone a separatist insurgency since the country's inception. The insurgency escalated into rampant violence after the 2006 murder of Nawab Akbar Khan Bugti, the grandfather of Brahamdagh Bugti.
"The American resolution and committee formed for Balochistan is not against the sovereignty of Pakistan. Every country has the right to interfere or intervene [in another's affairs] if there are state-sponsored human rights violations," he said.
'They are protecting Punjab's sovereignty'
Sceptical of mainstream politicians' and media attention to Balochistan's affairs, Brahamdagh said the change of heart was rooted in apprehensions over Punjab's sovereignty. "Pakistani politicians like Nawaz Sharif are now visiting Balochistan and inquiring about the plight of Baloch people. There are discussions and talks on TV channels and print media in recent days about Balochistan. Because they are now worried about the sovereignty of Punjab and [want] to protect Punjab's interest."
If they were sincere, he said, they should have raised the issue of enforced disappearances, mutilated bodies of Baloch youth and leaders earlier.
Reiterating his stance that there is violation of human rights in Balochistan by security forces and agencies, Brahamdagh said that Army Chief Gen. Ashfaq Parvez Kayani had said that there was no military operation in the province and must stop denying the truth now.
Brahamdagh pointed out that if the lawmakers believe that the situation in Dera Bugti, Kohlu and adjoining areas is normal, they should allow free access to the region for journalists, international humanitarian organisations and citizens.
'No negotiations'
When asked about an all-parties conference that Prime Minister Yousaf Raza Gilani had announced over the crisis in Balochistan, Brahamdagh said that Baloch nationalist leaders will not join negotiations. "One the one hand, they are calling an APC while on the other, they are brutally killing Baloch people and throwing their bullet-riddled, mutilated bodies," he said.
Brahamdagh called on Balochistan Governor Zulfiqar Magsi and Chief Minister Nawab Aslam Raisani to also join the Baloch movement, leaving behind their "temporary" and "personal" interest as they will not achieve anything but humiliation from supporting the Pakistani government. "If they do not want to join the movement, they should resign from office and sit quietly because the Baloch movement is nearing its destination. Efforts are being made to unify the rank of Baloch leaders."
When asked about the recent killing of his sister and niece in Karachi, Brahamdagh said that such brutalities will not compel him to withdraw or surrender from the struggle.
He also lashed out at the ultra-conservative Difa-e-Pakistan Council, which has announced a public gathering on February 27 in solidarity with the Baloch people. "Where were they when Baloch women, children and youth were being picked up and brutally killed by security forces? There is no influence of Jihadi elements in Balochistan. These religious parties are backed by security agencies," he said.

Any man who dresses up his weapon like an Apache warrior is OK in my book.

More covert support is needed to the Baloch freedom fighters from India,NATO and Afghanistan.

Isn't he in Switzerland after being evicted from his refuge in Afghanistan?

Anyone knows for sure where he is?

pmaitra said:
Isn't he in Switzerland after being evicted from his refuge in Afghanistan?

Anyone knows for sure where he is?
Click to expand...

He is still a state guest in Geneva,Switzerland...

W.G.Ewald said:
Any man who dresses up his weapon like an Apache warrior is OK in my book.
Click to expand...

And anything against the Porkis is OK in my book!!!!!!

Exiled Baloch leader Brahumdagh Bugti has called on India to back the secessionist struggle in Pakistan's largest province, saying international pressure is necessary to prevent what he described as a "massacre of an entire people."
Click to expand...

In an exclusive interview to The Hindu — his first to an Indian newspaper — Mr. Bugti said New Delhi had an "ethical obligation, as a democracy and a regional power, to join the world in condemning the ongoing massacre of the Baloch people." "The Baloch do not need guns," he added, "but we need political support, so Pakistan's military knows the world will hold it to account."
Click to expand...

I do not understand why India is so reluctant to speak about this issue," Mr. Bugti said "when Pakistan not only backs separatist groups in Jammu and Kashmir but even funds terrorists."
Click to expand...

pmaitra said:
Isn't he in Switzerland after being evicted from his refuge in Afghanistan?

Anyone knows for sure where he is?
Click to expand...

If he told anyone where he is 'hiding', he would have to find a new hiding place!

His family has been target killed recently.
http://m.timesofindia.com/PDATOI/articleshow/11817020.cms

blackwater said:
He is still a state guest in Geneva,Switzerland...
Click to expand...

Where is someone like Che when you need him these days?
You must log in or register to reply here.
Similar threads
First of four US Navy ships to support NATO Ballistic Missile Defense
Aid, Help or Support India can give to Taiwan in case of PRC's invasion of Taiwan
Larsen and Toubro wins British Royal Navy design contract to develop bid for building Fleet Solid Support ships
My first novel released. Need your support!
Share:
Facebook Twitter Reddit WhatsApp Link