Officials in China have expressed frustration with communist ally North Korea, according to leaked classified US diplomatic cables.

Pyongyang was behaving like a "spoiled child", a Chinese foreign ministry official is quoted as having said in 2009, in cables released by Wikileaks.

The peninsula should be reunified under Seoul's control, they suggested.

The revelations come as regional tensions remain high after the North shelled a South Korean island a week ago.

The US administration says the Wikileaks disclosures are an attack on the world community, but that partnerships it had worked hard to build would withstand the challenge.

China has responded to the leaks by urging the US to "properly handle relevant issues," a foreign ministry official said on Tuesday.
'New reality'

One cable published on Monday reveals that China's Vice Foreign Minister, He Yafei, told the US charge d'affaires in Beijing that North Korea was behaving like a "spoiled child" to get Washington's attention in April 2009 by carrying out missile tests. 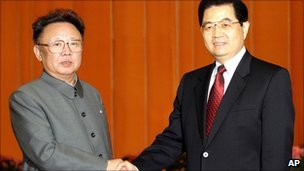 
[China] would be comfortable with a reunified Korea controlled by Seoul and anchored to the United States in a 'benign alliance'"
Click to expand...

said Mr He had downplayed Chinese Premier Wen Jiabao's trip to Pyongyang, telling the US Deputy Secretary of State, James Steinberg: "We may not like them... [but] they are a neighbour."

He said Mr Wen would push for denuclearisation and a return to talks.

Six-party talks aimed at defusing the nuclear issue and involving the two Koreas, the US, China, Japan and Russia have been stalled since April 2009.

South Korea and the US say they should not resume until the North has made a genuine offer on halting its nuclear programme.

Another cable relays a discussion over an official lunch in February 2010 between former South Korean Vice Foreign Minister Chun Yung-woo and the US ambassador to Seoul, Kathleen Stephens.

The minister is said to have revealed that a new, younger generation of Chinese leaders no longer regarded North Korea as a useful or reliable ally, and would not risk renewed armed conflict on the peninsula.

Mr Chun confidently had predicted that North Korea "had already collapsed economically and would collapse politically two to three years after the death of Kim Jong-il", despite his efforts to obtain Chinese help and to secure the succession for his son, Ms Stephens wrote.

"The PRC would be comfortable with a reunified Korea controlled by Seoul and anchored to the United States in a 'benign alliance' - as long as Korea was not hostile towards China," her message added.

While these cables offer fascinating insights, seasoned Korea-watchers caution that this is a very "South Korean" view of the policy debate in Beijing, says the BBC's diplomatic correspondent, Jonathan Marcus.

It remains unknown whether this South Korean assessment - as reported to Washington - is an accurate reflection of Beijing's current thinking, adds our correspondent.
Computer hacking

The communications between the US State Department and its embassies and consulates around the world were sent between 1966 and 2010.

Among the other revelations is a report that King Abdullah of Saudi Arabia, among other Arab leaders, urged the US to destroy Iran's nuclear facilities.

Other concerns aired in the cables include the possibility of Pakistani nuclear material falling into the wrong hands, allowing militants to make an atomic weapon. The widespread use of computer hacking by China is also reported.


Wikileaks has so far posted only 278 of the 251,287 messages it says it has obtained. However, all of the messages have been made available to five publications, including the New York Times and the UK's Guardian newspaper.

Wikileaks and the newspapers which have published the cables say they have done so in the public interest.

Aggressive steps were being taken against those who "stole" the information, said Secretary of State Hillary Clinton, adding that every country had to be able to have honest, private dialogue with other countries about issues of common concern.

No-one has been charged with passing them to Wikileaks, but suspicion has fallen on US Army Private Bradley Manning, an intelligence analyst arrested in Iraq in June and charged over an earlier leak of a classified video.

The cables release is the third mass Wikileaks release of classified documents; it published 77,000 secret US files on the Afghan conflict in July, and 400,000 documents about the Iraq war in October.

Wikileaks argues the release of the documents has shed light on the wars, including allegations of torture and reports that suggest 15,000 additional civilian deaths happened in Iraq.

Deputy Foreign Minister Kintto Lucas praised people like Mr Assange "who are constantly investigating and trying to get light out of the dark corners of information".