Why elections in Bolivia interest Brazil?

A simple user of DFI 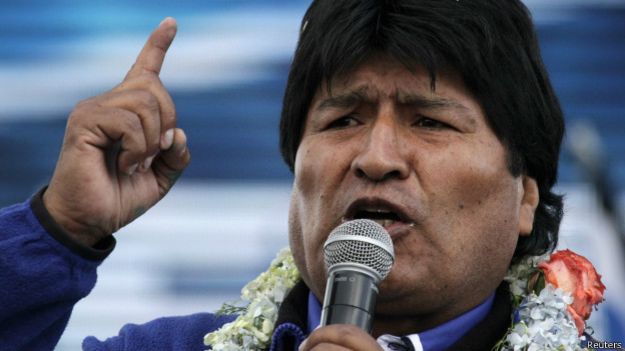 A few days before the presidential election, according to polls, Evo Morales was elected to a third term in Bolivia on Sunday, the president said that the relationship with Brazil today is "distant" but "reliable".

But according to analysts polled by BBC Brazil, the statements of the Evo national TV channel Unitel signaled that the tension experienced between the two countries at the time of the nationalization of the hydrocarbons industry for nearly eight years, is no longer the focus of the relationship bilateral.

"Every president, man or woman, has its own peculiarities, but there is no problem. Ela (Dilma) not visited (Bolivia), but there is a lot of confidence," said the president.

Surveys of-mouth urn released after Sunday's vote indicate that Morales remains six years (until the end of his third term in 2020) ahead of the government, after getting about 60% of the vote in Sunday's vote .

Mission of the Organization of American States (OAS), headed by former Guatemalan President Alvaro Colom, indicated that the process was carried within the normal range.

Even before the release of official results, President dedicated his victory to the Bolivian people and the leaders of the Latin American left.

"This victory is dedicated to Fidel Castro, Hugo Chavez dedicated to - rest in peace - and all presidents and anti-imperialist and anti-capitalist governments," spoke at Murillo square in front of the presidential palace.

If confirmed victory, Morales will end its mandate (which goes from 2015 to 2020), as the president who came to power longer in the country.
Exchange on the Plateau?

If his stay ahead of Bolivia is taken for granted, some analysts felt that a possible replacement in command in Brasilia could have impact on the relationship between the two countries.

The presidential Aetius Neves, the PSDB, said it may revise relations with Bolivia due to the entry of drugs produced in Bolivia in Brazil.

"We know that this is a matter that concerns the government of President Dilma, but action against this fact would be more overt than it is today if it were Aetius the next president," he said by phone political analyst and economics Javier Gomez of Studies Center for Labor and Agrarian Development (CEDLA), La Paz.

Another theme of the Bolivian campaign is related to Brazil's bilateral trade, since Brazil is the main trading partner of Bolivia.

The Bolivian economy is expected to grow 5.2% this year, one of the highest rates in Latin America, according to the IMF.

The resources of Bolivia increased, according to economists, thanks to the increase in the prices of minerals and gas due to the nationalization of hydrocarbons in 2006, which increased the Bolivian box.

Even the most critical economists say the government of Evo has conducted an economic administration "responsible" spending within the limits of the recipe you have.

But experts do Bolivians caveats. "The economic situation improved and poverty fell, but jobs are still very precarious," said Gomez.

Read how the election this Sunday can mess with the main items on the bilateral agenda between Brazil and Bolivia.
gas

The Bolivian gas is shipped largely to Brazilian thermoelectric feeding the industrial sector in Brazil.

In 2007, he said, this percentage was 44.1% higher -representava. Fit the YPFB, the Bolivian state, Petrobras and companies, the responsibility for the current contract, which ends in 2019.

During the campaign, the vice president, Alvaro Garcia Linera said that Bolivia will always be "attentive" to foreign capital, including Petrobras. But made no reference to changes in the contract.

"The name of Petrobras was quoted as are election days, but it is not clear here that no change is in place," said former deputy minister LÃ³pez.

According to him, the current dependence of Brazilian thermoelectric gas from Bolivia is decreasing.

"Brazil depends less and less on Bolivian gas and in the future might not even need to import it, according to the progress and productivity of its reserves in the pre-salt [oil and gas]," Lopez said.

In 2006, Evo Morales nationalized the industry and there was a crisis between the two countries. Today, however, Petrobras continues to explore gas fields in Bolivia and the supply of electricity to the Brazilian market was maintained.

That crisis, however, has left authorities and entrepreneurs more aware of the need to create alternatives to the Brazil Bolivian gas.
Presidential elections in Bolivia

If elected, Evo will enter his third consecutive term and shall govern until 2020, completing 14 years in a row Quemado presidential palace in La Paz.

According to opinion polls, Evo Morales, the Movement Toward Socialism party (MAS), was elected in the first round with between 50% and 70% of the valid votes.

According to the electoral rules of the country, to be elected in the first round, the candidate must have at least 40% of the vote and 10 percentage points more votes than the second place.

According to local research institutes, opponents candidates Doria Medina, the alliance of center-right Democratic Unity (UD), and Jorge Tuto Quiroga, Cristiano Democratic Party (PDC), have respectively 17% and 9% of the vote.

JosÃ© Luis GÃ¡lvez, the institute Equipos Mori, says Evo win in almost any country, even in opposition strongholds like the Department (State) of Santa Cruz de la Sierra, on the border with Brazil.

Bolivia is the country that record this year one of the highest economic growth rates in Latin America, based primarily in gas prices and mining, according to economic analysts.
drugs

Brazilian authorities estimate that between 60% and 80% of the drugs produced in Bolivia have Brazil as a destination.

During the campaign of the first round in Brazil, the candidate Aetius Neves (PSDB) said he could review relations with Bolivia if the country does not change its policy to combat drugs.

Responding to the criticism in an interview to the newspaper Folha de S. Paulo, the Bolivian president said the country decreased coca plantations of 32 000 hectares in 2005 to 23,000 - according to him, between 18 and 20 000 are for legal use.

Evo admitted, however, that there is a weakness in transit from Peru to Brazil. Stated that more work is needed on the issue of borders, but said this is already being done with President Dilma.

In 2008, Evo Morales expelled the DEA (Drug Enforcement Agency of the United States) of the country and caused concern among American and Brazilian authorities.

Critics suggest that Morales management of drug production in the country increased. Evo wont answer that strengthened the local police and the national strategy to combat cocaine production.

Some regions of the country are allowed to plant coca leaf Ethnic, defended by Evo, who was leader of the coca growers, the 'coca growers' country.
If Roger Pinto

After more than 400 days exiled in Brazil's embassy in La Paz, Bolivia's former Senator Roger Pinto Molina, an opponent of Evo Morales arrived in Brazil in 2013 in a clandestine manner with the help of a Brazilian diplomat.

The case shook the relationship between the two countries and led to the replacement of Foreign Minister of Brazil, Antonio Patriota, replaced by the current Chancellor Luiz Alberto Figueiredo.

Bolivians to analysts, the episode largely explains the "cold" relationship between the two governments.

Evo Morales accused him of involvement in a massacre of Indians in 2008, the state of Pando, and embezzlement.

This week, when asked if Roger Pinto case affects the relationship between Bolivia and Brazil, Evo said no. But the Bolivian government sources said they are still awaiting the return of the political "to be tried" in Bolivia.
Limit land

Brazilian farmers are among the main investors of soybeans and other crops in Bolivia, especially in Santa Cruz de la Sierra, on the border with Brazil-until recently known as the main stronghold opposition to the government of Evo Morales.

The main concern of the rural sector, according to the president of the Association of Producers of Oilseeds and wheat (Anapo), Demetrio PÃ©rez, is with a measure established by the government of Evo Morales, the country's new Constitution, which limits the size of the properties five thousand acres.

Producers, including Brazilians, ask that the measure is not retroactive. Who has larger farms than the limit fears having to give the government the surplus land.

According to PÃ©rez, the government of Evo still not responded to the demand of the industry.

"The climate of Evo dialogue with producers and the business improved. We hope that it meets our request after the elections. But today we still have uncertainty, "PÃ©rez, Santa Cruz de la Sierra said.

He said the Anapo meets Brazilian producers, Argentine, Japanese and others, who believe that the limit for the size of the properties can affect your investments in the country.