New Delhi: More than a year after its launch and amid Reserve Bank's claim that it had circulated 8 crore pieces of the ten-rupee coin, one wonders where the currency is?

Launched with much fanfare as an alternative to paper currency, the 8-gm coin with golden rim is hard to find in the market place.

Experts have different opinions on the matter. While some say that since the dual-metal coin resembles the euro, people often keep it as a souvenir; others are of the view that Rs 10-coins becoming popular is just a matter of time.

Canara Bank's senior official Raj Kumar said, "The (Rs 10) coins have not become popular as people prefer to carry the note which is available in abundance."

He added that the demand of Re 1 and Rs 2 coins is more as the currency notes of the same value are either not available or if available are in a poor condition. "Similar is the case with Rs 5 coins," Kumar said.

When contacted, an RBI official said that there is enough supply of Rs 10 coins in the market. Like other coins, with time it will become popular too.

I keep the 10 Rupee coins as souvenirs, same with the 2009-series 5 Rupee coins (those which are lighter, made of nickel, and have a golden sheen).

Instead of wasting money on coins made of expensive metals, RBI should look into making the currency notes more durable (like semi-plastic notes), with more ingenious security features.

I have not seen even a single Rs 10 coin till date, if I came across one I would probably keep it as a souvenir as well.

I have this coin

I think people tend to keep it as a souvenir and are reluctant to spend it. I have saved two of those in a "gullak" and guess its going back in a new "gullak".

I have never even heard of Rs. 10 coins. This is the first time I saw it, in here. 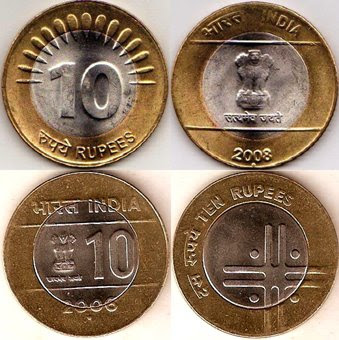 That was released as silver mementos. They weren't viable and those coins never made it.

Today 10 Rupee notes are perhaps the most circulated cash units, and being notes, extremely fragile. So a coin became viable, and they chose the bi-metal design, because it's extremely tough to mint (or clone).
Last edited: Jul 11, 2010
T

Its available in abundance in Delhi for sure..When i was in Delhi, all change i received that had to include Rs 10 was always a coin. Be it a hotel or the metro.

I am the luckiest guy when it comes to 10 rupee coins my friends tell me! I have got so many, that I stopped collecting them, at one time I had like nearly 8 or 9 coins, and the rest i used to use! Then I got bored, gave them all of, and ever since, I havent come across one! My Uncle was the first one who gifted one to me, after he got it as a change from a Vegetarian restaurant after buying Masala Dosa!! It was a lucky coin, and I gave it off and the curse is on me! I need a 10 rupee coin!!!
You must log in or register to reply here.
Similar threads
India among few countries developing hypersonic missiles with 12 wind tunnels where upto upto 13 mach can be tested, US Congressional report says
Nepal gets a consulate in Chinese city of Chengdu where India was promised one
Where are the mods?
Don't know where to post!!
Share:
Facebook Twitter Reddit WhatsApp Link