Photoshop fail ... government officials 'inspecting' a park. Photo: Yuhang Government website
And the award for the worst Photoshop ever?
For the second year in a row, the unofficial award goes to China after news that it was once again guilty of badly Photoshopping an official photo.
The story went viral yesterday after Time magazine published a photo and story showing Chinese officials seeming to walk on air.

Huili local officials float above a highway project in China's Sichuan province under the guise of 'inspecting' last year. Photo: Huili County Government
The US magazine reported that while the "old cut-and-paste technique works well in kindergarten classrooms and papier mache projects," officials from the Zhejiang Hangzhou Yuhang government discovered it doesn't transfer so smoothly to Photoshop.
The Photoshop occurred on an official Chinese government website announcing the otherwise unexciting completion of a landscaping project. It was accompanied by a re-edited photo of government officials 'inspecting' the park.'
"The sheer awfulness of the work — one man's legs appear to blend into the shrubbery; another floats in midair several inches above a brick pathway; none of the group appear to be casting shadows – met a mixture of indignation and amusement among Chinese netizens," said Time.
"It would fail photoshop 101," said Merilyn Fairskye, an associate professor of photomedia at Sydney College of the Arts.
She said the photo was hilarious. The mistakes were so obvious, they were surreal.
Professor Fairskye said altering official photos followed in the tradition of Stalin, who was famous for having officials removed from the same photo, as they fell out of favour.
She said the trend to altering photos was taking off as more people, like her, added themselves to family photos.
"I'll photoshop myself back into the photo if I've been the one taking all the photos," she said.
What was interesting was "how well it was done badly", said Professor Fairskye. It would be easy to fix the mistakes, she said, by shrinking the floating figures, adjusting the size of the figures and adding some shadows and different lighting.
On Twitter this morning, witticisms were flying.
"Worst Photoshop fail ever?" asked @Starbuckhelo.
"Air walking goes viral?" said @HadleyHCreek.
" #China "floating" inspectors on state-run media," said @markveldhuis.
"Sweet Ninja skills! SSCHWAAAAAA!" said @avantnerd.
It is the second time that badly done Photoshopping by Chinese officials has been exposed.
Last year, a similar incident triggered an internet meme, with people across the world Photoshopping three Chinese officials so they appeared to travel through time and space.

Nope, they're actually floating. Chinese can do that.

Yes, they are indeed floating.

Ever seen Hidden Tiger, Crouching Dragon - or was it the other way around?

CCP mindset... why bother doing it when you can photochop it! Kinda makes you wonder how much of anything they do is real.
I

It was the chinese netizens who made this to make fun of the CCP officials.


That has been posted in chinese forums ages ago.

I guess the subtle irony is lost on some people here.

Here is a scene from Crouching Tiger Hidden Dragon. 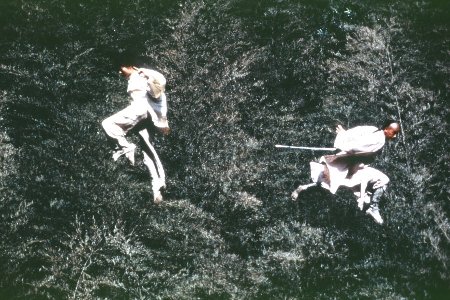 Nothing unusual. Flying comes naturally for some.
I

So does dancing and singing in certain entertainment venues called "movies".

I wonder why PRC is copying Soviet fighter jets when they can fly and float in air. I can see PLA soldiers flying across the Himalayas and invading India like a swarm of locusts.

Awful stuff . They need to outsource these jobs. In India 10 year old kids can do better.