What if the American decline never happens?

We keep hearing about how america's overstretched itself with massive debt and budget deficits pulling the U.S economy into the dust and how the Dragon is poised to take over and how the next century will see the end of the American hyperpower,but what if this never happens?

I never speak without research and the primary reason the above question has come to my mind here is one particular resource the U.S has that has the potential to change the way America does business.... i speak of Shale oil and gas.

What is shale oil?some of you may ask well the answer as per wikipedia is
-Oil shale, an organic-rich fine-grained sedimentary rock, contains significant amounts of kerogen (a solid mixture of organic chemical compounds) from which liquid hydrocarbons called shale oil can be produced. Shale oil is a substitute for conventional crude oil; however, extracting shale oil from oil shale is more costly than the production of conventional crude oil both financially and in terms of its environmental impact.

Isn't shale oils supposed to be commercially non- viable?
With current technologies yes, The earliest attempts to extract the oil utilized an environmentally unfriendly process known as "retorting." Stated simply, retorting required mining the shale, hauling it to a processing facility that crushed the rock into small chunks, then extracted a petroleum substance called kerogen, then upgraded the kerogen through a process of hydrogenation (which requires lots of water) and refined it into gasoline or jet fuel.

However New technologies such as hydraulic "fracking"
Hydraulic fracturing - Wikipedia, the free encyclopedia
and an experimental(till now)technology called In-situ Conversion Process (ICP) by shell can change all that. Turning the United states into the World's largest oil producer with Saudi Arabia's daily output being a mere fifth of what american can get out of it's currently proven shale oil deposits per day.


What would this money change?
Everything... America would be able to build and maintain a far more advanced and numerous Military and also be a far bigger donor.The end of american dependence on mid-east crude would mean the end of american support to the monarchies which could lead to regime changes like crazy.. remember the map of the Neo-con Mideast we saw earlier, that gentlemen might come true faster than you can imagine. 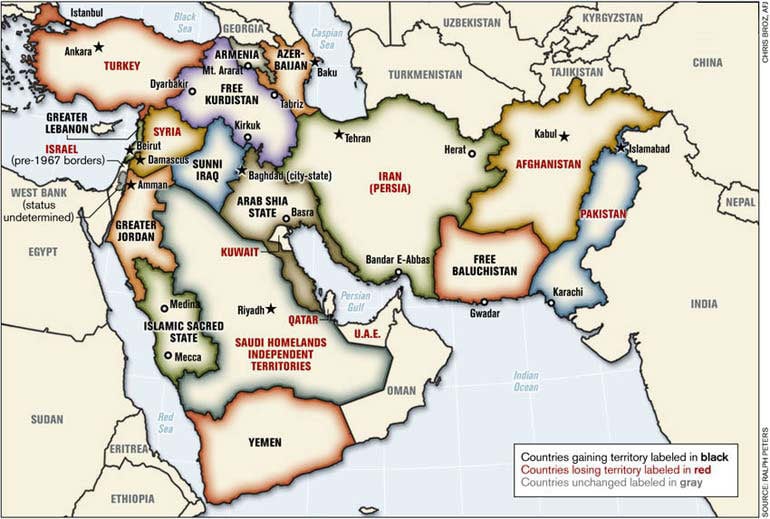 Europe would be reduced to be a bit player relying on Russian oil and gas to fuel it's needs while the removal of american demand will see global oil prices go down leading to reduction in Russia's oil revenues to some extent as India and china will still remain consumers of global oil.


Just a Thought... would love to get your views on this

I dont know if just shale oil is going to change anything. it will certainly not stop other economies like india and china from coming up. Even without shale oil, America is not on a decline. Even if it is. then it is kind of like the sun which even when it runs out of fuel, it will keep burning bright for quite a long time and give out enough energy.

Shale oil is getting easier to extract. Canada i think has larger reserves and also good technology. Reliance of India has bought shale reserves in the US and is pioneering shale oil extraction in India. India too has decent reserves of shale oil, but the problem in this regard is as usual the government which has so far not formed any policy on shale oil.

Canada is far behind the U.S in Shale oil reserves. The United States has 2,085,228million barrels to Canada's 15,241million barrels .The country that comes second after the U.S is Russia with 247,883million barrels.
I never said it would stop any other countries from coming up in fact i have said that continued demand from India and China will help Russia and the Middle east in keeping their economies going.
My point is that once the Americans are free from Mideast oil they will have a lot more cash to reverse whatever setbacks they have faced including the deficits and debts, Which will in turn help us and the Chinese as the Americans will start consuming like crazy again(it's really in their blood by now).Also they will be able to bankroll more military adventures and equipment leading to more unilateral interventions by the yanks.Shale oil money will change how america works with the world today.

successive war destroyed the society. economy can be made many times in a century but society takes more than that to come up even once the neglect of education and ethics of a community led to enormous harm to usa.
it matters how much reserve you own but in the end for whom you will exploit it, like africans, exporting all for bundle of currency. or like japanese and south korean, developing world class products.

american decline is a result of breaking of backbone of middle class and war is a legitimate reason to blame for the current downfall.
resources are secondary stuff, people are primary. the core issues are still unresolved in usa which hampers the recovery.

Why is POK shown as a part of Afghanistan in the above map?
W

Param said:
Why is POK shown as a part of Afghanistan in the above map?
Click to expand...

Turkey will not be happy with this map.

W.G.Ewald said:
Turkey will not be happy with this map.
Click to expand...

I think you misunderstood. PoK is Pakistan Occupied Kashmir and nothing to do with Turkey.

Yusuf said:
I think you misunderstood. PoK is Pakistan Occupied Kashmir and nothing to do with Turkey.
Click to expand...

He could be referring to Kurdistan..

Param said:
Why is POK shown as a part of Afghanistan in the above map?
Click to expand...

Don't ask me ask Bush and the Neo-cons

W.G.Ewald said:
Turkey will not be happy with this map.
Click to expand...

So what. America should make this map come true and do justice to the oppressed Kurds stuck between Iraq and Turkey. All those artificial boundaries in the middle east and AFPAK are a reason for much of the trouble. So new countries as shown in the map should be formed and democracy introduced.

If the US orders the removal of all those Nato nukes from Turkey what can they do?

LurkerBaba said:
He could be referring to Kurdistan..
Click to expand...

LOL at whoever developed this map . many gov are going to really pissed off at this map

looks like conspiracy against muslim nation that those ppl always talk about :thumb::thumb:
W

Yusuf said:
I think you misunderstood. PoK is Pakistan Occupied Kashmir and nothing to do with Turkey.
Click to expand...

Thank you for that explanation of PoK, Yusuf, I did not know what that term was. However, I did also notice that the map has a large area denoted as Free Kurdistan, which provoked my comment about Turkey.
Last edited: Oct 1, 2011
W

Param said:
America should make this map come true and do justice to the oppressed Kurds stuck between Iraq and Turkey.
Click to expand...

I really should confirm this before posting, but I thought I read recently that the US is providing UAVs to Turkey.

And here we are:

Officials said the administration of President Barack Obama has been mulling a Turkish request to acquire the Predator UAV in the war against Kurdish rebels in northern Iraq.
Click to expand...

W.G.Ewald said:
I really should confirm this before posting, but I thought I read recently that the US is providing UAVs to Turkey.
Click to expand...

UAVs are no big deal when US has allowed Nato nukes to be placed in Turkey. I was just giving my opinion in my earlier post. I know about the good ties between the US and Turkey.
Last edited: Oct 1, 2011

The current level of government spending in the US is only 26% of GDP compared to 42% in France. Their problem is they only collect 16% of GDP in taxes. A simple tax hike and small reductions in programmes would easily solve their problems. They just don't have an efficient enough political system to allow that to happen.

bengalraider said:
@Armand- If the Oil boom does happen they might just go the Saudi way and abolish taxes altogether
Click to expand...

Let this Oil boom come true then we'll know. I think this shale oil stuff is being exaggerated too much. There other big hype is Gas hydrates.
E

The problem with the US decline is not an economic issue its a political issue.
You have some really polarized divisions and a very inefficient Presidential system that comes in the way of special interest groups. With the Republicans worried more about winning the next election rather than saving the country and vice versa, the US will continue its decline.

I think there is a lesson for those who think a two-party only Presidential system is the best political system too. It seems now that a multiparty parliamentary system is the way to go. But that looks like a topic for another thread.

First of who ever said that America is going to decline obviously has some biased towards it, America is not going to decline all we are going to see is the Rise of Europe. This economic slow down will not effect their long term monopoly on power.
You must log in or register to reply here.
Similar threads
The decline of the American empire .
Taking care of eyesight - the American and Indian way
Former Pak Minister Threatens To Sue American Blogger
Latin American aerospace news and aircraft projects
Share:
Facebook Twitter Reddit WhatsApp Link