We will never sell weapons to Pak that can harm India, Su-35 is out of question :: Russian Govt.

Russia has clarified that its cooperation with Pakistan will remain “quite limited” and it will never sell weapons to the country that could potentially change the balance of power in the Indian subcontinent. The assurance comes after national security adviser Ajit Doval’s visit to Moscow and high-level counter-terrorism dialogue between India and Russia in Delhi last week.

“All reports arguing that Russia could also sell Su-35 fighter jets to Pakistan are false… Islamabad would want to buy these aircraft and other Russian weapons, but Moscow is unlikely to agree on anything more than a transfer of a limited number of fighter and transport helicopters in future,” a Russian government official told ET on condition of anonymity.

Russia’s cooperation with Pakistan will always remain quite limited, the official said, the recent deal between the two countries on supply of four Russian fighter helicopters to Pakistan notwithstanding.

The deal had sparked concern in India over the possibility of Pakistan acquiring more defence equipment from Russia.

When Doval visited Moscow last week, the situation in Af-Pak region was among the issues discussed threadbare. Simultaneously, Russia’s deputy foreign minister was in Delhi to hold a counter-terrorism dialogue with his counterparts in the external affairs ministry.

India and Russia decided to launch a joint counter-terror action plan and deradicalisation initiative to combat international terror. Russia has “deliberately” limited its military partnership with Pakistan since it will never risk its strategic relations with India, the Russian official cited earlier said.

The Russia-Pakistan joint military exercise in Pakistan last year had raised some eyebrows in India, as did the subsequent Russia-China-Pakistan meeting on the future of Afghanistan. Russia, however, was the first major power that supported India’s surgical strikes across the Line of Control in Pakistanoccupied Kashmir after the terrorist attack in Uri.

Did I hear a bubble burst? Lol! 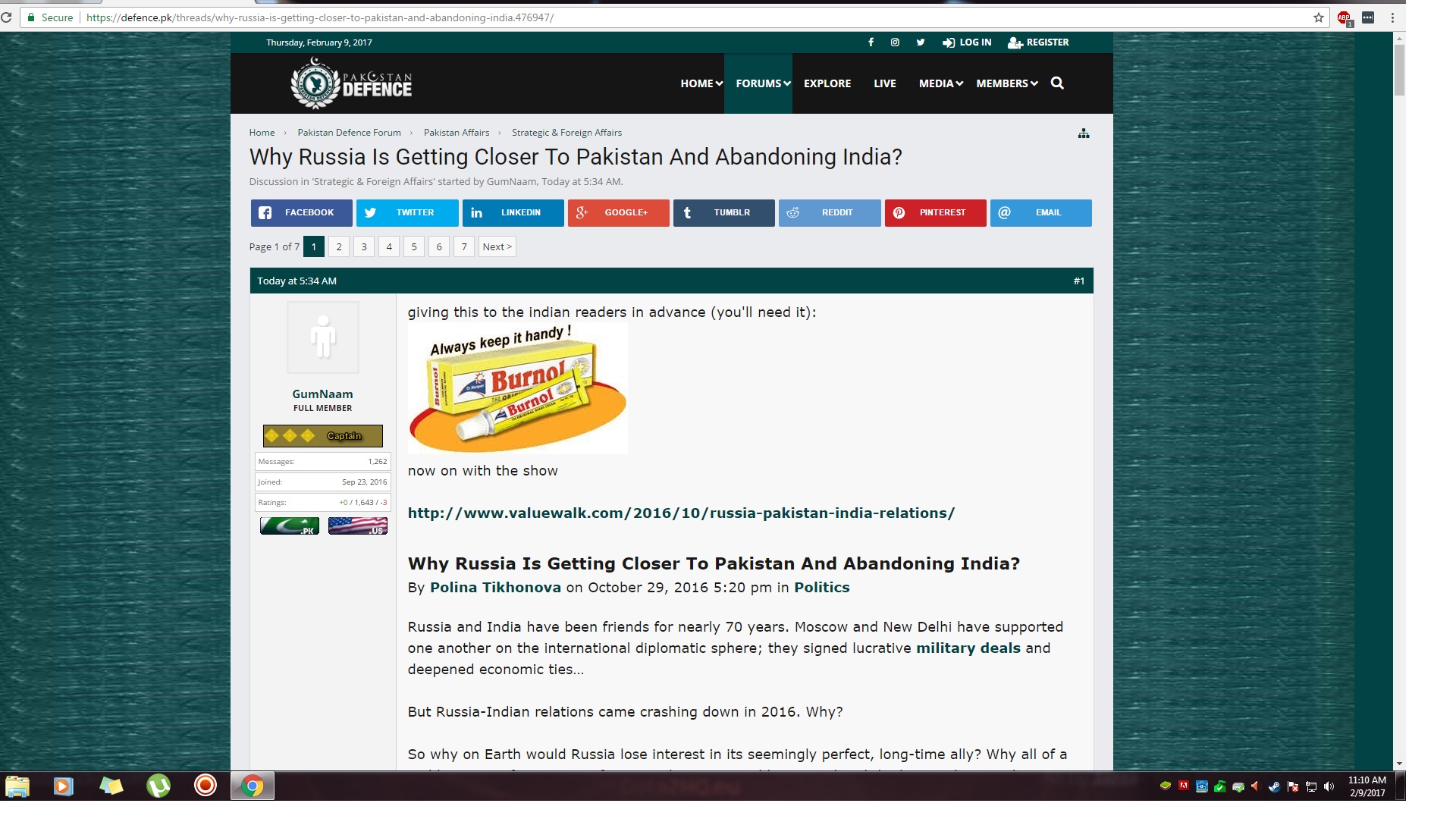 Prepare a time bound plan to reduce dependency on import of weapons ... that is the only way out...

There is no guarantee that Russia will not sell arms to Pakistan in future and Indians have to be prepared for that...

As India and US move closer to a strategic alliance that will draw Russia more closer to Pakistan... and the commercial aspects will play too...

Of course Russian won't sell pakistan anything which pakistan can't pay for.

It has nothing to do with India. Russian are supplying top of the line weapons to china anyway.

i have notice, i post some paki youtube video and after some time or some day that channel terminated by youtube, is there any link so that i ll not post, why should i terminate anybody channel as there hard work involve, any guess friends, today i post two video one of Indian economy and other of paki nautanki that channel terminated just i see...
You must log in or register to reply here.
Similar threads
India's Fighter Jets Hit Pakistan In A Surgical Strike You've Never Been Told About
INDIA’S COVERT OPERATION TO BLOW A PAKISTANI KAHUTA NUCLEAR PLANT THAT NEVER HAPPENED
Men may never truly get over a relationship break-up, says study
The American Concordes that never flew
Share:
Facebook Twitter Reddit WhatsApp Link