Was Gumnami Baba actually Netaji himself?

Was Gumnami Baba actually Netaji himself?

It's one of the greatest mysteries of modern India: Was Gumnami Baba, also known as the ascetic of UP's Faizabad, actually Netaji Subhas Chandra Bose? Subhro Niyogi, Saikat Rayand a team of reporters track down some people who actually interacted with him and are convinced that it was none other than the charismatic leader himself, living under an assumed identity. Read on to find out what they have to say

A moment that lasted a fraction of a second 33 years ago is etched so vividly in Surajit Dasgupta's memory that a mere recollection triggers a myriad emotions. Dasgupta's facial muscles twitch, lips quiver and eyes turn misty as he strives to utter something, stutters and then gives up.

After several minutes of internal strife, Dasgupta composes himself. "He was seated before me like every day when I had an urge to see him. I stole a glance and was so dazzled by the glow that emanated from within that I had to immediately lower my gaze. It is a sight I will never forget," he mumbles.

The "he" Dasgupta refers to was Bhagwanji, an ascetic in Faizabad, UP, who very few "knew" to be Netaji Subhas Chandra Bose. Here was the man who had been pronounced dead 37 years ago, a death millions refused to believe. Many felt he would return to India one day to finally solve one of the most baffling mysteries of modern times. And there he was!

"Netaji's associate and our guru, Sunil Gupta, had been visiting Bhagwanji for two decades. In the initial years, it was very secretive. He wouldn't disclose where he was going. All that we knew was that he had some very important mission. Later, he cryptically said: 'Contact has been established'. I knew at once he was referring to Netaji. I was thrilled. In the years that followed, I would accompany Gupta till the station as he took a train twice a year to travel to Neemsar and later Faizabad, once during Durga Puja and again on January 23, Netaji's birthday. It was much later, in 1982, that Gupta decided it was finally time we could be let into the exclusive circle, and we travelled to Faizabad to meet Bhagwanji," Dasgupta recalls. 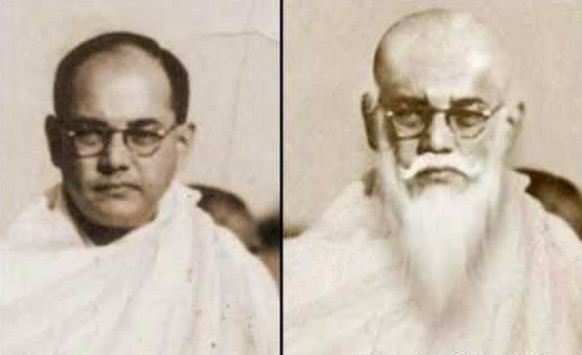 Netaji's portrait (L) and sketch of Gumnami Baba.
It was Netaji's elder brother, Suresh Chandra Bose, who had tasked Gupta with exploring every news and rumour that surfaced on Netaji's return to India. Gupta faithfully went to Shaulmari and other places where it was rumoured Netaji had returned in the guise of an ascetic. He was disappointed on each occasion, till he finally met Bhagwanji at Neemsar in 1962.

A few ground rules were laid before Dasgupta's first meeting; the most important being not to look at Bhagwanji. He generally communicated with a short curtain drawn between him and the visitors that hid his face. That is how Dasgupta met him as well.

"We would go to his house every day, have breakfast and then go to shop for the day's meals. While Saraswati Devi would cook, we would discuss world politics. After lunch, it could be about theology, music, even metaphysics. Sometimes, the discussions went on till the wee hours next morning. We would sit transfixed, listen with rapt attention and take down notes. He predicted the disintegration of USSR that was unthinkable then, talked about the mess in the Vietnam War. He even remarked that communism would die in the place of its birth. During the Bangladesh Liberation War, he followed the developments keenly and we believe he even passed on strategic instructions that helped decide the war," Dasgupta says. 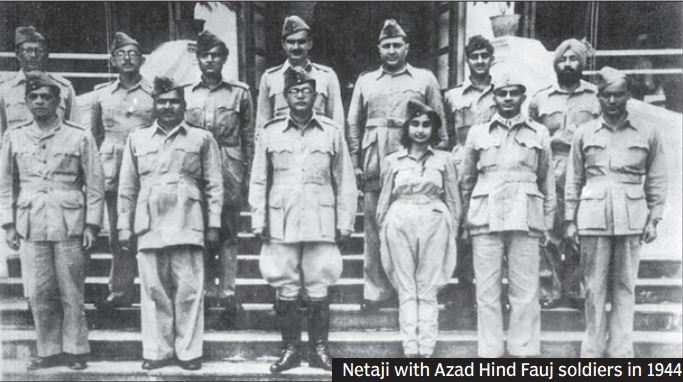 After the first two-three days, Bhagwanji trusted that the youths would follow the rules, and stopped drawing the curtain. It was on one of these days Dasgupta was seized by the irresistible desire to steal a glance at the person hero-worshipped across Bengal. And what a sight it was! "There was no mistaking it was Netaji. His hair had thinned, much more than what we were used to seeing in his photographs. He had a flowing beard. But the features were exactly the same. Only, he had aged. The eyes were so powerful I had to turn away immediately. I realized then that the patriot our parents and we had worshipped since we were kids had reached a higher plane of existence. He had become a mahatma," he recalls.

Rita Banerjee of Faizabad, too, refers to a "bright light" emanating from Bhagwanji. "The aura was so intense that I could not establish eye contact with him," says Rita, whom Bhagwanji called "Phoolwa Rani" and her husband "Bachha". Gyani Gurjeet Singh Khalsa, the chief priest of Gurdwara Brahamakund Sahib that overlooks the raging Saryu river, recounts a similar experience when he saw Bhagwanji face-to-face. "I was a 17-year-old when I saw him. The radiance on his face was astounding. It cannot be explained in words," he recounts.

Dasgupta, who is now 64, and some others who are convinced that Bhagwanji was Netaji, are waging a silent legal battle against the Indian government to extract the truth and discredit a lie they claim has been propagated for seven decades. In later years, Bhagwanji talked about the escape to USSR via Diren in Manchuria after a "concocted air crash". He talked vividly about how prison camps functioned in Siberia.

Dasgupta is among the very few alive to have met Bhagwanji. Bijoy Nag, a former auditor at a private firm, is another. Though he never looked at Bhagwanji, he can recall each meeting with amazing clarity. "On my first visit, I touched his feet while he remained behind a curtain. Blessing me, he said: 'Your dream is now a reality'. I was 31 and thrilled," recalls Nag, now 76. In all, he had met the ascetic 14 times between 1970 and 1985, and each meeting was memorable.

Most of Dasgupta's visits were when the ascetic was living in Purani Bustee. But it was at Brahma Kund (Ayodhya) where Bhagwanji stayed for a few months between 1975 and 1976 that Nag was in closest proximity with him. "I stayed in the room next to his. I could have looked at him any time if I wished because by then, the curtain had been drawn. He had only instructed us not to look at him and we didn't disobey him," says Nag, who had on Bhagwanji's request collected and delivered photographs of Netaji's mother, father and school teacher.

More stoic than Dasgupta, Nag is in control of his emotions but there is no mistaking the glimmer in his eyes when the subject is discussed. "Though I didn't look at him, I don't have an iota of doubt it was Netaji speaking to me. It is an unshakeable truth," he says with such definitiveness that one realizes it is backed by absolute conviction.

It was because of his aunt Lila Roy — who had been in constant touch with Netaji between 1922 and January 1941 — that Nag got the opportunity to meet Bhagwanji. It was INA secret service agent Pabitra Mohan Roy who told Lila about Bhagwanji in December 1962 after another Netaji associate, Atul Sen, broke the news on his return from Neemsar. His meeting Bhagwanji had been sheer providence. Sen, who had contested the legislative seat from Dhaka in the 1930s on Netaji's insistence and won, was in 1962 travelling to various places in UP on "change" on doctor's advice.

In April, he reached Neemsar, a pilgrimage site near Lucknow. It is here that he heard from locals about a Bengali mahatma who lived in an abandoned Shiva temple. Sen's curiosity was piqued and went to meet the ascetic. He finally met him after several attempts — and instantly knew it was Netaji. Over the next few days, he met Bhagwanji many times.

An ecstatic but cautious Atul Sen returned to Kolkata in 1962 and disclosed the news to Pabitra Mohan Roy and historian RC Majumdar. Sen also wrote to PM Jawaharlal Nehru on August 28, 1962. "Netaji is alive and is engaged in spiritual practice somewhere in India... From the talks I had with him, I could understand that he is yet regarded as enemy No. 1 of Allied powers and that there is a secret protocol that binds the Indian government to deliver him to Allied 'justice' if found alive. If you can assure me otherwise, I may try to persuade him to return to open life," he wrote. In the reply dated August 31, 1962, Nehru denied the existence of any such protocol.

Lila, meanwhile, resolved to serve Bhagwanji till her last day. From 1963 till her death in 1970, she would send money and sundry items to him every month through emissaries. Bhagwanji was fond of typical Bengali dishes like ghonto, sukto and keema. During his birthday celebrations, a closed-door affair with some family members and close acquaintances, delicacies served included mishti doi and khejur gur payesh.

It wasn't just people from Bengal who were meeting Bhagwanji. From December 1954 to April 1957, UP CMs Sampurnanand and Benarasi Dasgupta were in constant touch with Bhagwanji. Their letters as well as those from former railway minister Ghani Khan Chowdhury and other important leaders were found in Bhagwanji's belongings that are now in Faizabad Treasury.

On Tuesday, old photographs of Netaji Subhas Bose's family were found among the belongings of Faizabad's Gumnami Baba, who many believe was Netaji living incognito. The photographs were in a box belonging to Baba and were retrieved from the Faizabad district treasury in Uttar Pradesh, where they had been stored all these years.

Among the photos is a family portrait and one of Netaji's parents, Jankinath Bose and Prabhawati Bose. The identities of the people in the photos were confirmed by Shakti Singh, the owner of Ram Bhawan where Gumnami Baba spent the final years of his life, from 1982 to 1985.

"The family photograph of the Bose family shows 22 members besides his parents," said Singh, who is also a special invitee to the administrative committee formed by Faizabad district administration for retrieval and cross-verification of Baba's artefacts. Singh said that Lalita Bose, the daughter of Netaji's brother Suresh Chandra Bose, had visited Ram Bhawan in Faizabad on February 4, 1986.

In the middle row, are vJankinath Bose and Prabhawati Bose sitting with their three daughters. In the bottom row are the grandchildren of Jankinath Bose.
Apart from photographs,several telegrams also were found that were sent to Gumnami Baba by Azad Hind Fauj veterans Pabitra Mohan Roy (senior officer of INA's intelligence wing) and Sunil Kant Gupta on Durga Puja and January 23, Netaji's birthday.
"Gumnami Baba had a habit of making indirect references to people. He referred to Sunil Kant Gupta as Sukriti. Some letters mentioning the sender's name as Mukul and Tripti were also found," Singh told TOI.
Singh heads the SC Bose Rashtriya Vichar Kendra in Faizabad. He said the letters and documents retrieved from Ram Bhawan and kept in the Faizabad treasury indicate that the Baba was not just another sage or saint.
"He was definitely an extraordinary human being," said Singh.
Source>>
D