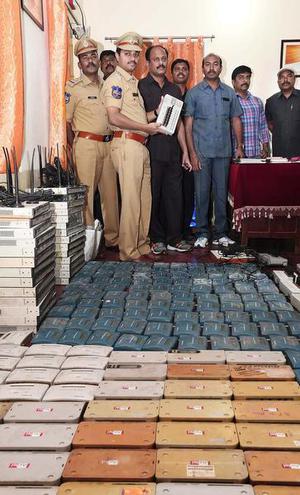 The South Zone task force police displaying the material seized from the accused on Sunday.


The gang had allegedly joined hands with some persons operating from Pakistan and other Gulf countries and most of the calls originated from those places.

“It also poses a severe threat to the country’s security as the original details of the caller are terminated and substituted with the local Internet Protocol (IP) address, thus leaving the caller untraced,” he said.

Mr. Chaitanya Kumar said VOIP enables use of the Internet as transmission media for calls by sending voice data in packets using IP rather than the traditional circuit transmission of Public Switched Telephone Network (PSTN). “The packets travel like any other type of data over public Internet,” he said.

Through this system, the data is connected to a VOIP gateway that converts it into voice calls, which are disseminated to the receivers.

The process will not leave any trace of the original international number from where the call originated. “By using fake SIM cards the accused were routing calls from different countries, the mobile numbers of which were unable to be traced by local service providers,” he said.

Nine VOIP gateway routers, which can hold up to 16 SIM cards, more than 500 cloned SIM cards, laptops, gateway tenor and mobile phone were seized from them.

Sources said that the easy availability of technology was the biggest factor working in favour of such racketeers and such technology is used by multinational companies by paying taxes to government.

Efforts are being made to establish links of operators, says Sawang

Just a few hours after President Ram Nath Kovind took off from the State capital after participating in a series of programmes on Wednesday, the city police announced that they were investigating involvement of some spies suspected to be from Pakistan operating through Voice over Internet Protocol (VoIP) to gather information from military agencies in Jammu and Kashmir (J&K).

The Military Intelligence Police of J&K reportedly alerted the Andhra Pradesh police saying it received suspicious calls through the VoIPs, being operated from Vijayawada, a few days ago. A team also came to the city to investigate the illegal VoIPs which were trying to leak sensitive information, it is learnt.

Based on the information, the local police conducted raids and seized a few VoIP routers, a large number of SIM cards and electronic equipment. They took 10 persons into custody.

Some ISI agents from Pakistan are trying to collect sensitive information relating to the military operations, movements of some VVIPs and other secrets from the military personnel by using local SIM cards, which are being operated from abroad. “The spies, posing as senior police and intelligence sleuths of India, are making calls to the J&K police from Vijayawada through the VoIP equipment and SIM cards obtained fraudulently. The matter is under investigation,” said a senior police official.

The police are trying to find out since how many days the illegal VoIP exchanges have been in operation, the persons behind them and their contacts in other countries.

“We are working on some inputs on VoIP exchanges diverting foreign calls as local calls from Vijayawada. The police are trying to establish the links of the operators,” said Police Commissioner D. Gautam Sawang. He refused to elaborate. Investigation officers suspect that the accused obtained some 200 SIM cards of various cell operators and sent them to other countries to extract sensitive information.

Ramesh Singh confesses to his role in anti-national activities, says an UP ATS official

The Uttar Pradesh anti-terror squad (ATS) has arrested a suspected Inter-Services Intelligence (ISI) agent from Pithoragarh in a joint operation with the Uttarakhand police and Jammu and Kashmir’s military intelligence unit, an official said in Lucknow on Thursday.

The arrested person, Ramesh Singh, worked as a cook at the house of an Indian diplomat in Pakistan for nearly two years and allegedly bugged his house with the help of the ISI to get sensitive information, the UP ATS official said.

Ramesh has confessed to his role in anti-national activities, he added.

A Pakistani mobile phone given to him to contact the ISI and some SIM cards were recovered from him, the official said.
You must log in or register to reply here.
Similar threads
Russian think tank calls for sale of Su-35 fighters to Pakistan in retaliation to India opting out of FGFA
UK-based Turkish law firm calls for trials of India's Home Minister and Army Chief
Saudi Arabia BANS Tablighi Jamaat, calls it 'one of the gates of terrorism'
France: Chechen Teen Beheads Teacher shouting Allah Hu Akbar, Macron calls it Islamic Terror Attack
Share:
Facebook Twitter Reddit WhatsApp Link