London, Oct 7 (PTI) Tamil Nadu-born Venkatraman Ramakrishnan, a senior scientist at the MRC Laborartory of Molecular Biology at Cambridge, has won the 2009 Nobel Prize for Chemistry along with two others, the Nobel Committee announced today.

Born in 1952 in Chidambaram, Ramakrishnan shares the Nobel prize with Thomas E Steitz (US) and Ada E Yonath (Israel) for their "studies of the structure and function of the ribosome".

He moved into biology at the University of California, San Diego, where he took a year of classes, then conducted research with Dr Mauricio Montal, a membrane biochemist.

Venkatraman Ramakrishnan: A profile - India - The Times of India

LONDON: He may have migrated to the US long back, but Indian-American Venkatraman Ramakrishnan on Wednesday made a billion people back home proud by
winning the Nobel Prize for Chemistry for his pioneering work on ribosome, a cellular machine that makes proteins.

57-year-old Ramakrishnan, born in the temple town of Chidambaram in Tamil Nadu, is the seventh Indian or of Indian origin to win the prestigious award.

Born in 1952, Ramakrishnan earned his B.Sc. in Physics (1971) from Baroda University in Gujarat and later migrated to the US to continue his studies where he later got settled and attained US citizenship.

He earned his Ph.D in Physics from Ohio University in the US and later worked as a graduate student at the University of California from 1976-78.

During his stint at the varsity, Ramakrishnan conducted a research with Dr Mauricio Montal, a membrane biochemist and later designed his own 2-year transition from physics to biology.

As a postdoctoral fellow at Yale University, he worked on a neutron-scattering map of the small ribosomal subunit of E Coli. He has been studying ribosome structure ever since.

Ramakrishnan, now a senior scientist at the MRC Laboratory of Molecular Biology in Cambridge has authored several important papers in academic journals.

In the August 26, 2000 issue of Nature, Ramakrishnan and his co-workers published the structure of the small ribosomal subunit of Thermus thermophilus, a heat-stable bacterium related to one found in the Yellowstone hot springs.

With this 5.5 Angstrom-resolution structure, Ramakrishnan's group identified key portions of the RNA and, using previously determined structures, positioned seven of the subunit's proteins.

In the September 21, 2000 issue of Nature, Ramakrishnan published two papers. In the first of these, he presented the 3 Angstrom structure of the 30S ribosomal subunit.

His second paper revealed the structures of the 30S subunit in complex with three antibiotics that target different regions of the subunit. In this paper, Ramakrishnan discussed the structural basis for the action of each of these drugs.

After his postdoctoral fellowship, Ramakrishnan joined the staff of Brookhaven National Laboratory in ther US. There, he began his collaboration with Stephen White to clone the genes for several ribosomal proteins and determine their three-dimensional structures.

He was also awarded a Guggenheim fellowship during his tenure there, and he used it to make the transition to X-ray crystallography.

"I am deeply indebted": Dr Ramakrishnan 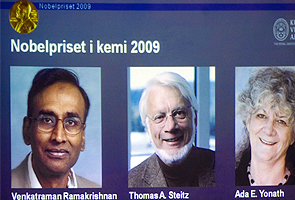 Tamil-Nadu born Dr Venkatraman Ramakrishnan of the Medical Research Council Laboratory of Molecular Biology has won the 2009 Nobel Prize in Chemistry for studies of the structure and function of the ribosome.

He shares the prize with Thomas A Steitz of Yale University and Ada E Yonath of the Weizmann Institute of Science in Israel.

After the news reached him, Dr Ramakrishnan said: "I have to say that I am deeply indebted to all of the brilliant associates, students and post doctors who worked in my lab as science is a highly collaborative enterprise. The MRC Laboratory of Molecular Biology and the University of Utah supported this work and the collegiate atmosphere there made it all possible. The idea of supporting long term basic research like that at LMB does lead to breakthroughs, the ribosome is already starting to show its medical importance."

The Indian-born scientis, aged 57, is the senior scientist and group leader at the Structural Studies Division of the MRC Laboratory of Molecular Biology in Cambridge, England.

Sir Leszek Borysiewicz, of the Medical Research Council Chief Executive, said: "We are absolutely delighted that Dr Ramakrishnan's work has been recognised with the 2009 Nobel Prize for Chemistry. Venki's award is the Medical Research Council's 29th Nobel Prize and is a reflection of the excellent work that our scientists do. The MRC is committed to long-term support of the difficult areas of basic science as exemplified by Venki's success. It is only on the back of such discoveries that we can continue to drive translation into benefits for human health."

The three have won the Nobel Prize for atom-by-atom mapping of the protein-making factories within cells -- a feat that has spurred the development of antibiotics.

Ribosomes produce proteins, which in turn control the chemistry in all living organisms. The ribosome is found in all living cells, including those of bacteria. Human and bacterial ribosomes are slightly different, making the ribosome a good target for antibiotic therapy that works by blocking the bacterium's ability to make the proteins it needs to function.

Ramakrishnan, Steitz and Yonath demonstrated what the ribosome looks like and how it functions at an atomic level using a visualisation method called X-ray crystallography to map the position of each of the hundreds of thousands of atoms that make up the ribosome.

Dr Ramakrishnan's basic research on the arrangement of atoms in the ribosome has allowed his team not only to gain detailed knowledge of how it contributes to protein production but also to see directly how antibiotics bind to specific pockets in the ribosome structure.

This could help researchers to design antibiotics to treat people who are infected with a bacterium that has developed antibiotic resistance, for example some of the strains of bacteria that cause tuberculosis. Better targeting of the bacterial ribosome should also help to avoid negative effects on human cells thereby reducing the side effects of taking antibiotics.

Congratulation Mr. Venkatraman Ramakrishnan.
You have made every Indian proud. Its amazing to see how Indians abroad have achieved so much and have provided respect to their mother land India.

There are people on this planet planning terrorists attacks on innocents, proliferating WMD, spreading hatred for other human beings, misusing science for their own bigotry self glorification and exploiting resources for their superfluous national pride.

But on the other hand Great persons like Mr.Venkatraman Ramakrishnan are providing stability to vulnerable humanity by their hardship, research and dedication.

Congratulations Mr. Venkatraman Ramakrishnan, you have made a billion+ people proud and your groundbreaking work will help all humanity by creating newer antibiotics. I agree with you hit and run there is a famous quote disease is the greatest enemy of man not other men.

WoW!! Great news. I have attended his course on Ribosomes and their crystal structures when I was in IISc, Bangalore. Glad to be one among students taught by him. Great feeling.

Congratulations!!! Venky (that's how he is called in Scientific circles)

Great Achievement! Congrats to him and his family. Earlier Sunita Williams, an Indian origin, astraunot had gone to space. So, the Indian community in US is doing very well. Congratulations to them. May they continue with their good work and make great contributions to the world and their nation.
You must log in or register to reply here.
Similar threads
Nobel winner V Ramakrishnan refuses to attend Indian Science Congress, calls it a 'circus'
Lula wins Brazilian Presedential Elections
Tata Sons wins bid for Air India, official announcement awaited
Larsen and Toubro wins British Royal Navy design contract to develop bid for building Fleet Solid Support ships
Share:
Facebook Twitter Reddit WhatsApp Link