The U.S. Air Force has confirmed to Aviation Week the existence of the so-called "Beast of Kandahar" UAV, a stealth-like remotely piloted jet seen flying out of Afghanistan in late 2007.

The RQ-170 Sentinel, believed to be a tailless flying wing design with sensor pods faired into the upper surface of each wing, was developed by Lockheed Martin's Advanced Development Programs (ADP), better known as Skunk Works. An Air Force official revealed Dec. 4 that the service is "developing a stealthy unmanned aircraft system (UAS) to provide reconnaissance and surveillance support to forward deployed combat forces."

The UAV had been discussed on the Ares technology blog, as well as elsewhere online, but the USAF statement to Aviation Week was the first to detail the aircraft.

"The fielding of the RQ-170 aligns with Secretary of Defense Robert M. Gates' request for increased intelligence, surveillance and reconnaissance (ISR) support to the combatant commanders and Air Force Chief of Staff Gen. Norton Schwartz's vision for an increased USAF reliance on unmanned aircraft," says the emailed statement.

The RQ-170 is flown by the 30th Reconnaissance Squadron at Tonopah Test Range, Nev. - home of the F-117 stealth fighter when the program's existence was secret - and falls under Air Combat Command's 432d Wing at Creech Air Force Base, Nev. At Kandahar, the Sentinel was seen operating out of General Atomics Aeronautical Systems' hangar.

The 30th RS was activated as part of the 57th Operations Group on Sept. 1, 2005, and a squadron patch was approved July 17, 2007. The activation - although not the full meaning of the event - was noted among those who watch for signs of activity in the classified world.

The RQ-170 designation is similar to that of the F-117 - a correct prefix, but out of sequence to avoid obvious guesses of a program's existence. Technically, the RQ designation denotes an unarmed aircraft rather than the MQ prefix applied to the armed Predator and Reaper UAVs. The USAF phrase, "Support to forward deployed combat forces," when combined with observed details, suggest a moderate degree of stealth (including a blunt leading edge, simple nozzle and overwing sensor pods) and that the Sentinel is a tactical, operations-oriented platform and not a strategic intelligence-gathering design.

Many questions remain about the aircraft's use. If it is a high-altitude aircraft it is painted an unusual color - medium grey overall, like Predator or Reaper, rather then the dark gray or overall black that provides the best concealment at very high altitudes. The wingspan appears to be about 65-ft., about the same as an MQ-9 Reaper. With only a few Internet images to judge from - all taken from the left side - the impression is of a deep, fat centerbody blended into the outer wings.

With its low-observable design, the aircraft might be useful for flying the borders of Iran and peering into China, India and Pakistan for useful data about missile tests, telemetry as well as gathering signals and multi-spectral intelligence.
Click to expand...

Another black project declassified, what is interesting is the author suggests that the "beast"may have been used for recon in Indian airspace.anyways this got me thinking if this is what the Americans are declassifying what is still classified?

USA is going into third stage of UAVs development, if i may call UAV as first generation, then Combat UAV as second generation and now this stealth UAV as third generation.

DRDO at present is still developing first generation and trying its hand on second generation UAVs.

It would be better to try some thing like stealth UAV too, before attempting for stealth fighter aircraft. 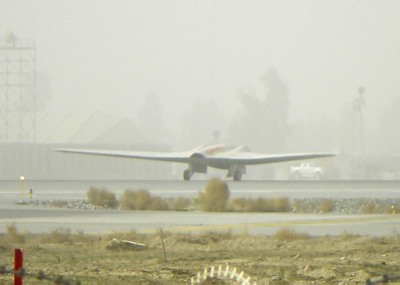