SPARKS, Nev. — Eren Ozmen, president of Sierra Nevada Corporation (SNC), announced today that the U.S. Air Force (USAF) has selected SNC and its partner Embraer Defense and Security for its Light Air Support (LAS) program. After a thorough rebidding process, the USAF again deemed the A-29 Super Tucano aircraft, and the overall solution offered by SNC, to be the superior choice for this critical mission. The initial $427.5 million delivery order is to supply the USAF with 20 A-29 Super Tucano aircraft.

As the aircraft selected for the LAS program, the A-29 Super Tucano will be used to provide light air support, reconnaissance and training capabilities to the Afghanistan military. As such, it is a vital element of the United States' Afghan withdrawal strategy and central to maintaining security in that region going forward. The LAS program also will provide the United States and other partner nations with important capabilities for agile, flexible, economical, new-generation multi-role airpower.

"The Light Air Support program is essential to the United States' objectives in Afghanistan and to our national security. It is a great honor to serve our country by providing the aircraft, training and support for this program," said Taco Gilbert, vice president of Integrated Tactical Solutions for SNC's Intelligence Surveillance and Reconnaissance business area. "The A-29 Super Tucano with its proven track record is exactly what's needed for the LAS program where the mission is critical and time is short. We will deliver a superior product, on-time and on-budget."

"We are glad to provide the U.S. government with the best aircraft for the LAS program and to aid American warfighters and partners with a cost-effective solution," said Gary Spulak, president of Embraer Aircraft Holding, Inc. "Through this contract with SNC, we will increase our investment in the United States by creating new jobs and supporting American businesses."

"Congratulations to the Sierra Nevada Corporation and its partner Embraer Defense and Security for being selected by the U.S. Air Force for its Light Air Support program. The program will be built in Jacksonville and bring valuable jobs to Northeast Florida families," Florida Governor Rick Scott.

The A-29 aircraft for the LAS program will be built in Jacksonville, Fla. With the support of the state of Florida and the Jacksonville Airport Authority, the facility at Jacksonville International Airport already is undergoing modifications necessary to receive the aircraft assembly line, ensuring that production can begin on-schedule.

In all, the LAS contract will support more than 1,400 American jobs, reflecting both the large U.S. supplier base – more than 100 companies will supply parts and services for the A-29 Super Tucano – and new jobs that will be created by SNC and Embraer. Embraer will create new high-tech jobs at its production facility in Jacksonville, adding to the 1,200 people Embraer currently employs in the United States, and new jobs at SNC will add to its U.S. workforce of 2,500 people.

The A-29 Super Tucano is a robust, versatile and powerful turboprop aircraft capable of carrying out a wide range of missions, including close air support and intelligence, surveillance and reconnaissance. The aircraft is in use with nine air forces around the world and, for more than eight years, has employed state-of-the-art capabilities in operational missions. The Super Tucano is equipped with advanced electronic, electro-optic, infrared and laser system technologies, as well as secure radio systems with data links and unrivalled munitions capacity. This makes it highly reliable and allows for an excellent cost-benefit ratio for a wide range of military missions, even operating from unpaved runways and in hostile environments. These characteristics, along with its well-proven combat record, make it the logical choice for the LAS mission.

Facts about the A-29 Super Tucano:

"¢ A clean sheet design – built from the ground up for the light air support mission
"¢ A production aircraft – more than 190 ordered and more than 170 built and delivered
"¢ Operational today and performing ISR and close air support missions around the globe
"¢ In use with militaries in nine nations: Angola, Brazil, Burkina Faso, Chile, Colombia, Dominican Republic, Ecuador, Indonesia and Mauritania
"¢ More than 180,000 flight hours logged, including 28,000 combat hours; no combat losses
"¢ Certified for more than 130 munitions configurations
"¢ Features open-architecture avionics
"¢ Provides significant room for growth – the A-29 Super Tucano has the open design architecture required to keep pace with next-generation avionics, communication and weapons systems
"¢ Proven low operating costs – 84 percent fleet availability; 99 percent fleet mission effectiveness
"¢ More than 100 U.S. companies in more than 20 states provide parts or services for the Super Tucano
"¢ In all, the LAS contract will support more than 1,400 American jobs, reflecting both the large U.S. supplier base and new jobs that will be created by SNC and Embraer. Embraer will create new high-tech jobs at its production facility in Jacksonville, adding to the 1,200 people Embraer currently employs in the United States, and new jobs at SNC will add to its U.S. workforce of 2,500 people.

After this bought, the chances of Super Hornet to win the Brazilian FX-2 program increased a bit.

All in this world is a favors' exchange.

Is that Aircraft selected for Afghanistan Air Force? I remember reading it some where...

Payeng said:
Is that Aircraft selected for Afghanistan Air Force? I remember reading it some where...
Click to expand...

Yes, Amrikans will empower the Afghan Air Force capabilities gifting it with this airplane

Payeng said:
Is that Aircraft selected for Afghanistan Air Force? I remember reading it some where...
Click to expand...

Yup, this is for the fledgling Afghan air force.

How does USAF select it when it is for Afghans? How does it create so many American jobs when it is a Brasilian plane? Who names their kid Taco?

So many unanswered questions...


The US Air Force has chosen a Brazilian firm for a $427 million contract to supply light attack planes to Afghan forces, the company said Thursday, despite competition from an American bid.

Brazilian planemaker Embraer said 20 of its AT-29 Super Tucano aircraft would be manufactured in Florida in partnership with an American firm, after winning a prolonged competition with US rival Hawker Beechcraft Corp.

US forces are due to withdraw from Afghanistan next year, leaving the Afghan military to continue the fight against Taliban rebels, and Washington is racing to train and equip its lightly-armed allies for the battle ahead.

"The A-29 Super Tucano with its proven track record is exactly what's needed," said Taco Gilbert, a vice-president of Embraer's US partner in the contract, the Sierra Nevada Corporation (SNC)

The propeller-driven Super Tucano comes in single and two-seated versions that can be equipped with a machinegun and a variety of bombs and missiles, in a ground attack or reconnaissance role.

Embraer and Sierra Nevada were initially awarded a $355 million contract for the planes in December 2011, but the US Air Force called off the deal two months later after a legal challenge from rival Hawker Beechcraft. 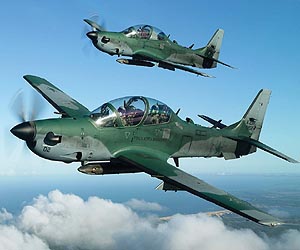 This is like shooting 2 birds with 1 stone: The Americans would like to equip the Afghan forces with modest defense capability without compromising American military tech that later on might fall into Afghan Taliban hands (so better Brazilian tech than American tech); and, Brazil is happy which might help the Super Hornet in the Brazilian MMRCA.

You have to give it to the AMericans... :thumb: