The Newspaper's Correspondent — Published about an hour ago

WASHINGTON: Alarmed by a series of threats and counter-threats between India and Pakistan, the United States has asked the two countries to reduce tensions and resume dialogue.

The tensions followed the Indian army’s controversial June 9 cross-border strike on a militant site in Myanmar which left seven militants dead and a dozen others injured.

“We encourage India and Pakistan to take steps to reduce tensions and to move towards resuming talks,” said a US State Department spokesman, Jeff Rathke.

Asked if the United States had reached out to India or Pakistan to defuse tensions after the Myanmar strike, Mr Rathke said: “We’ve encouraged a reduction of tensions on both sides at high levels, so that’s something we’ve mentioned.”

The official, however, declined to say what was the US position on the Indian strike inside Myanmar.

“I don’t have a comment on that specific operation,” said the official when asked if the US supported the strike or was concerned about it.

Soon after the strike, India’s Minister of State for Information & Broadcasting Rajyavardhan Rathore warned that New Delhi could take similar actions against other countries if their territories were used for carrying out militant attacks inside India.

Asked whether India could engage in similar surgical strikes on militant groups inside Pakistan, Mr Rathore said: “This is a message for all countries, including Pakistan, and groups harbouring terror intents towards India. A terrorist is a terrorist and has no other identity. We will strike when we want to.”

NGOs: Mr Rathke expressed concern over Pakistan’s crackdown on Save the Children organisation but he also said he was not sure if Washington had raised this issue with officials in Islamabad. “It’s certainly a matter of concern to us,” he said.

How not to Deal with Pakistan
Sunday, September 13, 2015 by Indiandefense News 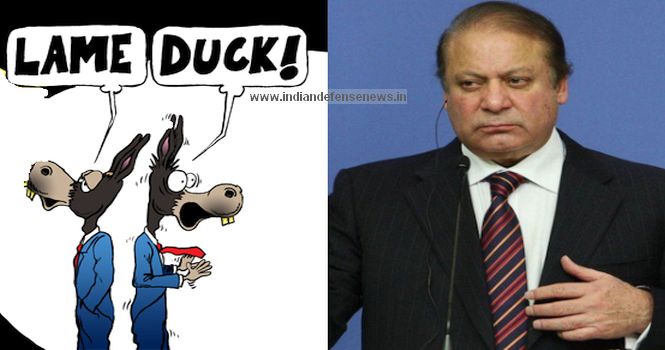 NAWAZ SHARIF seems fated to have an adversarial relationship with his army chiefs. He was first elected to office in 1990, heading an army/ISI-backed alliance of Islamist parties. Sharif was soon at loggerheads with his army chief Gen Asif Nawaz, who died in mysterious circumstances. General Asif’s successor, Gen Waheed Kakar, duly sacked Sharif in 1993. In his second term, Nawaz chose to force his soft-spoken and professionally respected army chief Gen Jehangir Karamat to quit. He then superseded several senior generals and appointed a ‘Muhajir’, Pervez Musharraf, to succeed Karamat. Musharraf was joined by Sharif in leading Pakistan to disaster and diplomatic disgrace, following an ignominious defeat, in the Kargil conflict. In the blame game and melodrama that followed, Musharraf overthrew, incarcerated and exiled Sharif.


Sharif’s woes with the army and its chiefs continue to haunt him even in his third term. In November 2013, he bypassed and sidelined two senior and highly regarded officers, including Gen Rashad Mehmood, whom he appointed to the largely ceremonial post of chairman of the Joint Chiefs of Staff Committee. He then appointed Gen Raheel Sharif, who had a pretty ordinary service record, as the army chief. Nawaz again erred grievously in his assessment of the new army chief he selected. He ignored the fact that General Sharif had been a long-term crony of his bete noire Pervez Musharraf, against whom he had then initiated criminal charges. General Sharif’s elder brother, who was a highly decorated officer, was killed during the Bangladesh conflict in 1971. He was one of Musharraf’s closest buddies. Raheel Sharif received no end of patronage, to rise to the highest ranks of the army, largely thanks to Musharraf.


After becoming the army chief, General Sharif has seriously undermined Nawaz Sharif’s image, credibility and power, both in domestic affairs and in foreign and security policies. He started by sending a word that the army would not tolerate any arrest, or detention, of its former chief, Pervez Musharraf. A terrified Supreme Court and a chastened Nawaz duly complied. This was followed by clear messages to Nawaz that he should not seek closer trade relations with India, or meet Pakistan’s desperate energy needs by getting electricity from India. General Sharif also took charge of the Afghanistan policy and even got the ever-obliging President Ashraf Ghani to call on him at the GHQ in Rawalpindi, during a State visit to Pakistan. Raheel Sharif deals with the Afghan President and others, as though he is a parallel head of government.


General Sharif has totally marginalised the Nawaz government, within Pakistan also. The army launched the Zarb-e-Azb operations against the Tehriq-e-Taliban, without the formal government and parliamentary approval. These operations have rendered more than one million Pashtuns homeless and led to cross-border shootouts, across the Durand Line. It was Raheel Sharif who also turned down Saudi requests for assistance in Yemen and got the Pakistan Parliament to rubber stamp what he wanted. The army is now acting like a State within a State in Baluchistan, where it ignores the orders of the Supreme Court to produce “missing” persons it had detained. In Karachi, it has become a law unto itself, by getting the paramilitary Rangers to clamp down on the MQM.


It should have been obvious to New Delhi that the NSA-level talks on terrorism were going to achieve nothing, as the Pakistan NSA has no say on the terror that the Pakistan army unleashes within and beyond Pakistan’s borders. The strategy should, therefore, have been to not yield, either on the agenda of talks or on meetings with the Hurriyat, without giving Pakistan a chance to scuttle the talks and blame New Delhi. Pakistan’s policy, to which we have wrongly acquiesced to in the past, is to tell the world that the Hurriyat Conference is the sole, authentic representative of the people of J&K and that the elected government in Srinagar is merely an unrepresentative puppet of India. Allowing Pakistan to use visits by its leaders to India to achieve this aim, by their meeting the Hurriyat leadership and not the State’s elected leaders, was a grave folly.


The fundamental mistake that New Delhi initially made in dealing with the meeting of NSAs was to seek an agenda from Pakistan, instead of just saying that talks would be held according to the provisions of the Ufa agreement. Sartaj Aziz would obviously have raised the issue of J&K. He could have been told that we would not respond, as the item was not on the Ufa agenda. We could have added that the whole of J&K is an integral part of India, as enunciated in the unanimous parliamentary resolution of 1994. Likewise, after voicing our objections to a meeting of Sartaj Aziz with the Hurriyat, all that needed to be done was to slap detention orders on Hurriyat leaders while they were in Delhi, after the arrival of Sartaj Aziz. He could surely have not called off talks after landing in New Delhi!


Nawaz Sharif is today a “lame duck” Prime Minister, incapable of independent decision-making, not just on issues like terrorism, infiltration and J&K, but even on issues like trade, energy, connectivity and economic cooperation. Serious issues like terrorism and cross-border infiltration can be addressed only by the Pakistan army in meetings between DGMOs, at which officials of the Ministry of External Affairs and Intelligence agencies would participate.

The DGMO meetings should be institutionalised. Gen Raheel Sharif can then be reminded regularly of his mentor Pervez Musharraf’s assurance that “territory under Pakistan’s control” would not be used for “terrorism against India”. In the meantime, New Delhi’s response to infiltration and cross-border terrorism will have to be increasingly robust, as it was prior to the ceasefire in 2003.