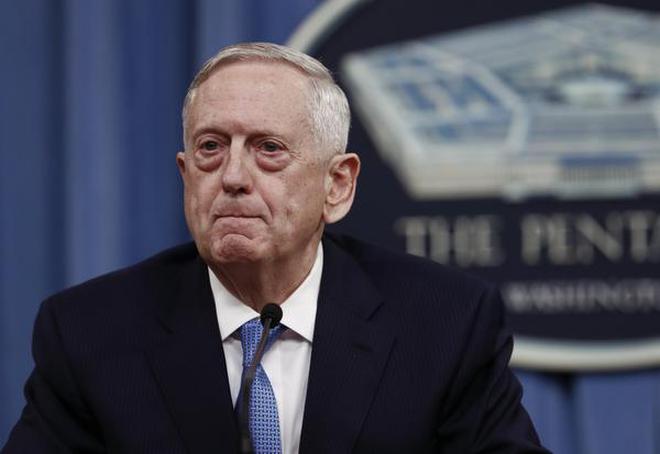 The US sees India as a pivotal nation for its security in the Asia Pacific region, the Pentagon has said as the Trump administration quietly started the process of implementing the recent designation of India as a “major defence partner”.

“The relationship between India and the United States is on track. Secretary [James] Mattis has made the defence relationship with India a top priority,” Pentagon Spokesman Captain Jeff Davis told PTI.

“He sees India as a pivotal nation in the region going forward for our security,” Captain Davis said, weeks after Mr. Mattis had a successful meeting with India’s National Security Advisor Ajit K Doval at the Pentagon.

According to media reports, Mr. Doval’s American counterpart Lt Gen H R McMaster is slated to visit India soon. The White House refrained from making any comment on the visit.

Keeping defence ties on the forefront of the India—US relationship, the Trump administration is believed to have started the process of implementing in letter and spirit the recent US designation of India as a “major defence partner” .

Mr. Mattis in his first phone conversation with the then Indian Defence Minister Manohar Parrikar is believed to have said that he is ready to take off the India—US defence relationship from where it was left by his predecessor Ashton Carter.

The assurance is being fast implemented by the Pentagon, sources said.

A day before Mr. Trump was sworn in as the 45th President of the US, the Department of Commerce federal notification that relaxed India-specific defence export control norms.

Under this, the Bureau of Industry and Security (BIS) amended the Export Administration Regulations (EAR) by establishing a licensing policy of general approval for exports or re-exports to or transfers within India of items subject to the EAR.

In addition, BIS amended the end use and end user provisions of the Validated End User (VEU) authorisation to state that items obtained under authorisation VEU in India may be used for either civil or military end uses other than those that are for use in nuclear, missile, or chemical or biological weapons activities.

The move on the last day of the previous Obama administration is believed to address some of the major concerns of India when it comes to import of state-of-the-art defence technology and military hardware to India.

“The changes in the Export Administration Regulations, reflective of India’s status as a Major Defence Partner, will enhance defence ties as well as private sector linkages,” a State Department official told PTI.

License applications to export military and related dual-use items to India will generally be approved, the official said.

“Under the Department of Commerce’s Validated End User program, Indian entities can qualify for a general authorisation for exports and re-exports of military and related dual use items, consistent with US law, for projects in support of official US—India defence cooperation, other than those that are for use in nuclear, missile, or chemical or biological weapons activities.

“India is the only country in the world authorised to receive both military and dual-use items under a VEU programme,” the State Department Spokesperson said in response to a question.

“Our defence partnership with India is among our most important in the world. The United States supports India’s rise as a net security provider in the region, and the breadth of our defence cooperation, including through the US—India Defence Trade and Technology Initiative, is continually expanding,” the official said.

The support to India US defence relationship comes from the opposition Democratic party too, reflecting the bipartisan support to the ties between the two largest democracies of the world.

“This remains an exciting time in the US—India relationship, as we are starting to realise the potential of our bilateral cooperation and economic investment,” Senator Mark Warner, ranking Member of the powerful Senate Intelligence Committee said.

Noting that India is fast becoming one of the largest, most dynamic, and most diversified markets in the world, Warner said one aspect of the bilateral relationship between the two countries that has gained real momentum in recent years is the defence trade relationship, which is part of a broader growth in bilateral defence cooperation.

“Given the growing convergence of Indian and US security interests and the deepening of our defence trade and technology cooperation relationship, last year my colleagues and I advanced legislation to make permanent the organisational structures within the Department of Defence that support this aspect of the relationship,” said Warner, who is also Democratic Co-Chair of the Senate India Caucus, which is the only country-specific caucus in the US Senate.

“Additionally, I have been advocating with the US administration for approval of the Indian request for unmanned, unarmed drones for intelligence, surveillance, and reconnaissance that could advance our shared interest in better maritime domain awareness in the Indian Ocean,” he said.

US has tier system when it comes to friends.

Their inner ring consist of European NATO nations, then comes the rest.

They are saying in the game that is going on in Asia, India is key to them. This do not mean India is dear to them.Their interests change every time.

India has its own strategic interests, if they coincide with USA then India will work closely with USA.

“India is the only country in the world authorised to receive both military and dual-use items under a VEU programme,” the State Department Spokesperson said in response to a question.
Click to expand...

Srinivas_K said:
India has its own strategic interests, if they coincide with USA then India will work closely with USA.
Click to expand...

foremost of them being containing/isolating the wily wicked dragon

OneGrimPilgrim said:
foremost of them being containing/isolating the wily wicked dragon
Click to expand...

...................................,,,,,,
You must log in or register to reply here.
Similar threads
US firm sees India among key markets in aerospace sector
Should India reform its attitudes to multiculturalism we see it failing in Europe?
Taiwan parliamentary delegation visits India, China sees red
'US didn't see any reason for India to have 5,500-km range missiles'
Share:
Facebook Twitter Reddit WhatsApp Link