US Pacific Command Admiral ready for war with China

The next US ambassador to Australia and the current Pacific Command (PACOM) Admiral Harry Harris addressed Congress with a hardline proposal to deter China’s growing influence in the Asia-Pacific region.
TrendsUS
In his speech, Harris commended regional non-NATO ally Australia for its role as a hub for PACOM’s military prowess in the Pacific Ocean. “Australia is one of the keys to a rules-based international order,” he asserted, signalling that the country would play an increasing part in America’s new doctrine. 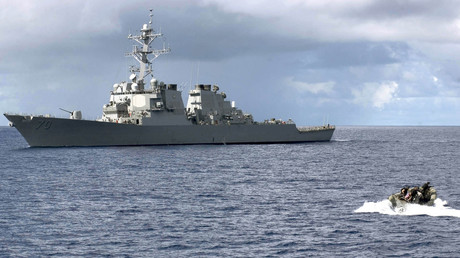 ‘Sovereignty & security violation’: Beijing outraged by US warship sailing off disputed island
“China’s ongoing military buildup, advancement, and modernization are core elements of their strategy to supplant the U.S. as the security partner of choice for countries in the Indo-Pacific, but China also holds clear global ambitions,” Harris continued.

“At the end of the day the ability to wage war is important or you become a paper tiger. [We will] cooperate where we can, but remain ready to confront where we must,” he remarked. “I’m hopeful that it won’t come to a conflict with China, but we must all be prepared for that if it should come to that.”

However, Harris’ rhetoric may not be so well-received, as Canberra’s interests remain intrinsically linked to the Chinese.

"The idea that Australia has to choose between China and the United States is not correct," he added.

Harris’s stance comes at a time when relations between the US and China can hardly be called friendly. After Beijing brushed off a July 12, 2016 UN Permanent Court of Arbitration ruling, arguing in favor of the Philippines’ sovereignty over territorial waters in the South China Sea and began building military infrastructure on the Spratly and Paracel Islands, the US advocated ‘freedom of navigation’ in the waters around them. 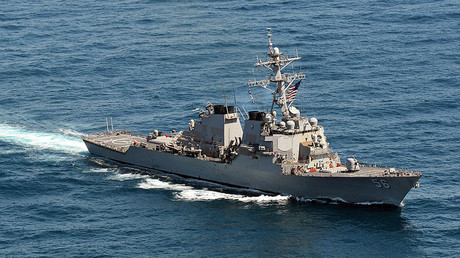 US sends McCain’s namesake to challenge Chinese maritime claims
China has protested the US’s presence in the South China Sea. Tensions rose between the two countries after the US Navy sailed the USS Dewey past Mischief Reef last May and USS Stethem past the Triton Islands last July. The USS McCain also entered China’s territorial waters last August to challenge China in another 'freedom of navigation' mission.

Chinese are not ready for full-on war with the US, that's for sure.
Also if I'm not mistaken this USN admiral is of japanese descent.

Razor said:
Chinese are not ready for full-on war with the US, that's for sure.
Also if I'm not mistaken this USN admiral is of japanese descent.
Click to expand...

Chinese are using asymetric warfare against US. When the paradigm change comes they will
be decimated.

Bluffing. They can't even win in Vietnam and Afganistan. US can only bully the small and weak.

xizhimen said:
Bluffing. They can't even win in Vietnam and Afganistan. US can only bully the small and weak.
Click to expand...

its chinese ..whatever they say is a lie..similar to pathological liar pakistan

So the report is from early 2018, so they've been "ready for war with China" for over 2 years already, how much long they need to stay this "ready"? He himself could be retired by now..

This report is from 2020 and very today.

Some nations who know how to war takes time to prepare and hit the enemy unlike china who drowns own soldiers with floods, when facing the adversary which ofcourse is the result of inexperienced chinese war planners not taking into consideration the weather or the season.

sorcerer said:
Some nations who know how to war takes time to prepare and hit the enemy unlike china who drowns own soldiers with floods
Click to expand...

What? you mean China sent troops to help to fight flood in China this summer?