'US' new spacecraft to trigger arms race in space'

'US' new spacecraft to trigger arms race in space'

The latest unmanned spacecraft launched by the US has triggered concerns in China over a new arms race in the space as the "small shuttle" is feared to have platforms to launch new space weapons with ability to carry out anti-satellite operations, media reported Saturday. 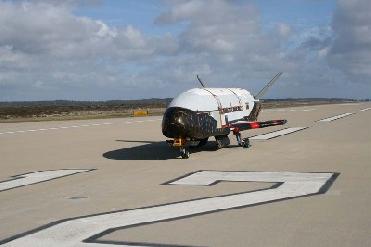 The X-37B is an unpiloted military space plane. USAF Photo

State-run 'China Daily' featured the launch of the unmanned spacecraft X-37B as one of the lead stories in the front page with a headline 'US space craft sparks arms race concerns'.

The US Air Force launched the unmanned spacecraft with a rocket from Florida's Cape Canaveral Air Force Station on Thursday. The spacecraft is designed to fly in low orbit for as long as nine months.

It will be the first space craft to carry out an autonomous re-entry in the history of the US programme.

The spacecraft is the world's only reusable operational spaceship and "an important breakthrough of space technologies", the daily quoted Zhao Xiaozhuo, a research fellow of military studies under China's Academy of Military Science of the People's Liberation Army, as saying.

The space plane is considered to hold potential military value as it can serve combat-support systems and become a platform for launching space weapons, Zhao said, adding it can also be used for anti-satellite operations.

"As a superpower, the US has been calling for nuclear disarmament all these years and urged other countries to be more responsible for world peace and safety," Zhao said.

"But in the meantime, its development of the space plane may lead to an arms race in space," he said.

Zhai Dequan, deputy secretary-general of the China Arms Control and Disarmament Association, however disagreed with Zhou saying that the impact of the space plane with ability to stay in orbit for nine months "may not be serious enough to trigger an arms race in space", but it has demonstrated US' resolve to take a leading position in it.

"The US has previously said that it would slow down the pace of developing the space plane project. But now with the launch, it shows the US has never really slowed down," Zhai said.

The space plane has the potential to destroy other nations' satellites, which will help the US take the lead in space, he said.

"China has always insisted on the peaceful exploration of outer space. It is urgent for all countries to reach an agreement to avoid weaponising outer space," Zhai said.

In 2007, China shocked the world by launching a satellite of its own orbiting 500 miles in the space with a missile.

It was the first time that a satellite was destroyed in the space which was seen as attempt by Beijing to demonstrate its technological ability and rising military posture.

It was also interpreted by US officials as a dangerous move towards weaponising space.

The Chinese test also set off India's Defence Research Development Organisation, (DRDO) to go for development of new systems to shoot down low orbiting enemy satellites as well as to invent security systems to protect Indian satellites and deny access to its space assets.

US officials say the X-37B, which is also called Orbital Test Vehicle- 1 (OTV-1) is intended to serve as a platform for experiments and to offer insights on transporting satellite sensors and other equipment to and from space.

F-16 and MIG-31 have both anti satellite capability (for decades) the space arms race hype is overdone.

Can this bird be used to launch space to ground weapons? That would be some weapon. The response time for any BMD would be very little and impossible to defend. All thats required is to get this spacecraft over the hostile country and attack. I am sure the Americans would have some thing like thay up their sleeve.

Yusuf said:
Can this bird be used to launch space to ground weapons? That would be some weapon. The response time for any BMD would be very little and impossible to defend. All thats required is to get this spacecraft over the hostile country and attack. I am sure the Americans would have some thing like thay up their sleeve.
Click to expand...

X-51 Getting Ready For First Flight

There's some pretty exciting stuff going on at Edwards Air Force Base as the flight test center team gets ready to conduct an awe-inspiring X-51 first flight. The plan is to air launch the X-51A WaveRider using an expendable solid rocket booster
from under the wing of a B-52, this spring.

Lt. Col. Todd Venema, director of the Hypersonic Combined Test Force explained just how the test team plans to do that. "We're going to take the WaveRider and launch it from a B-52 at 50,000 feet over the Pacific Ocean and the vehicle is going to drop away."

Colonel Venema further explained that if all goes as planned, the vehicle will be accelerated by a solid rocket booster up to about Mach 4.5. Once it reaches that speed the booster will drop away and the vehicle and the engine will ignite and accelerate the vehicle up to Mach 6, about six times the speed of sound.

Johnny Armstrong, chief engineer of the Hypersonic Combined Test Force explained what a scramjet is. "A scramjet is an engine that has no internal moving parts. It takes in air, you mix fuel in it and it automatically burns and because of the high speed and high temperature that you get in flight, it's able to produce a thrust."

Developed by Boeing, the jet-fueled, air breathing hypersonic vehicle is expected to demonstrate a reliable system capable of operating continuously on jet fuel and accelerating through multiple Mach speeds.

Testing hypersonic technology at Edwards is not new. The concept began in 1959 with the X-15 program, which Mr. Armstrong was also involved in. Work on the program pretty much stopped until recently, but as a result of advancements in technology, interest in the program has rekindled and has allowed testers to go forward.

Colonel Venema said the upcoming first flight is a fairly complicated test. He said the altitude is at the top of the B-52 capability and said testing will call for flight test chase planes. "Telemetry has to be relayed to the Naval Air Station at Pt. Magu to a control room with about 35 people, all watching the various telemetry. So there will be a lot of team work aspects to the whole project," he said.

Dawn Waldman, chief of broadcast for the 95th Air Base Wing Public Affairs, explained in a recent newscast that testers say the purpose behind the X-51A program is to demonstrate the ability to use air-breathing, hydro-carbon propulsion in the hypersonic flight regime, which is flight more than five times the speed off sound. Charlie Brink, X-51 program manager at the Air Force Research Laboratory says what makes that a challenge for the test team is that conventional turbine engines are physically limited to about 2.5 Mach or 2 .5 times the speed of sound.

"The scramjet in the X-51 will be able to take in the air flight speeds over Mach 4 and up to Mach 6," Brink said, explaining, as Armstrong did, that the engine achieves its speed by taking in air from the atmosphere, burns it and uses it for thrust, a capability, he said, that will be able to be applied to many other flight applications that the Air Force might use.

"The application really is all about space lift," Mr. Brink agreed, and said, "This is the one, I think, in the Air Force Research Lab we're most excited about."

Mr. Brink pointed out that they currently transport payload into space with the shuttle, which has to carry all of its oxidizers for the propulsion concept. He said the shuttle is a pure rocket system and said if they can incorporate scramjet engine technology into the space lift systems, they wouldn't have to carry the oxidizers and could carry more payload instead.

Calling the X-51 program the highlight of his career, Mr. Armstrong said, "For me personally, this is a real reward toward the end of a career where I've worked hypersonics and now all of a sudden this program is here and after 32 years since the X-15 last flew, I'm able to go back into a control room and experience a hypersonic flight test program."

The X-51 program is a consortium between Boeing and Pratt and Whitney Rocketdyne. The customers are the U.S. Air Force Research Laboratory and the Defense Advanced Research Projects Agency, with support from NASA.

It is said that there is no such thing as 'coincidence.' In that case, the recent launch of the U.S. Air Force's X-37B which occurred around the same time as an even more secret mission which blasted off from across the nation hints at something more. Just what that more might be – the U.S. Air Force is not saying.

The X-37B lifted off atop an Atlas V rocket at 7:52 a.m. (EDT) from Cape Canaveral Air Force Station on Apr. 22. Clear across the nation at Vandenberg Air Force Base the Falcon Hypersonic Technology Vehicle 2, (HTV 2) lifted off on top of a Minotaur Rocket – a mere 32 minutes earlier.

However, the Air Force reported that they lost contact with the craft shortly after it separated from the rocket. The test vehicle was supposed to test out several maneuvers and then fall back into the Pacific Ocean, it was not released as to whether or not the vehicle accomplished these tasks.

The X-37B can best be described as a mini space shuttle, complete with payload bay, whereas the HTV 2 is a black stealthy dart. What, if any, correlation there may have been between the two separate launches has not been identified.