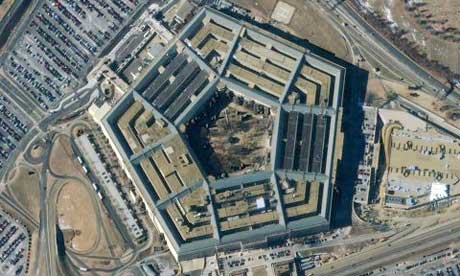 The push for a Great Green Fleet, and eco-friendly forces in general, runs across the Pentagon.

The US navy is set to be both green and mean with the dawning of an new eco-friendly assault force that will mind its carbon footprint as it destroys its enemy. It is to launch "the Great Green Fleet", a fighting force of ships, submarines and planes powered entirely by biofuels. The first group will be tested in 2012, and the navy plans for it to be operational by 2016.

The push for greener fighting forces runs across the Pentagon. The military accounts for nearly 80% of the US government's energy consumption and the two wars in Afghanistan and Iraq have made strategists acutely conscious of both the massive cost and serious security risks of the gas-guzzling ways of the past.

By the time it arrives in the war zone, a gallon of gas can cost up to $400, according to a study by the Pew project on national security, energy and climate. The US military is also anxious to cut down on fuel convoys to reduce troops' exposure to roadside bombs and other risks.

While a large proportion of Americans remain sceptical about global warming, the Pentagon does not. Its long-term strategic review earlier this year officially recognised global warming as a security threat. "The department of defence takes climate change seriously," said Amanda Dory, deputy assistant secretary of defence for strategy.

The Pentagon has committed to procuring 25% of its electricity from renewable sources by 2025. It is also looking to convert its fighting machine to greener sources of fuel.

On Thursday, the navy will test an F/A-18 Super Hornet – the biggest gas-guzzler in the US air fleet – powered by a 50-50 mix of jet fuel and camelina, an oil seed grown in Montana. The army is also investing in portable wind generators and working to take its huge base in Fort Irwin California off the public electricity grid in the next decade, using a 500MW solar panel array. The Marine Corps, meanwhile, has a 10x10 campaign aimed at reducing energy and water use over the next 10 years.

The navy has a head start on the other branches of the military. About 17% of its craft -aircraft carriers and submarines — are already fuelled by nuclear power. Aside from the green strike fleet, the navy hopes to get half of its energy consumption, on-shore and afloat, from alternative energy.

But the military's idea of the plus sides advantages of going green may still not entirely chime with those of environmental campaigners. "The over-riding reason was to make us better war fighters," said the navy secretary Ray Mabus.


The US Navy marked "Earth Day" today with a M1.2 supersonic demonstration of a "Green" F/A-18 Super Hornet using a 50/50 mixture of JP-8 jet fuel and biofuel developed in part by Honeywell subsidiary UOP.

The flight, out of the Navy's Patuxent River location, was the first of 15 flight demonstrations and 23 flight hours through mid-June that will be used to certify the 50/50 mix. The 45-minute flight was also the first flight of a supersonic jet with afterburners using a biofuel blend, says the Navy.

Preliminary results from test show that there was no difference in engine performance metrics attributable to the fuel mix, officials say.

Once the entire flight envelope is cleared for the F/A-18's GE F414 engine, the Navy plans to expand its certification efforts to other Navy and Marine Corps aircraft and Navy tactical systems.

The UOP process converts the raw camelina oil, which in this case was produced by Seattle-based Sustainable Oils from the inedible camelina plant, into a renewable fuel through a hydro-treatment at a facility in Texas. The renewable fuel portion, which does not have the aromatics associated with petroleum derived fuels, must be mixed with JP-8 to prevent damage to certain seals and other engine components, says a UOP spokewoman.

UOP is under contract to US Defense Energy Support Center to produce for the Air Force and Navy 600,000 gallons of hydro-treated jet fuel delivered by seven vendors using a variety of feedstock, including camelina, animal fats and algae.

The Air Force in March successfully performed the first flight of an A-10 Thunderbolt II using the camelina mixture.

contract from the US Defence Advanced Research Projects Agency (DARPA) to produce renewable jet fuel for the US military.