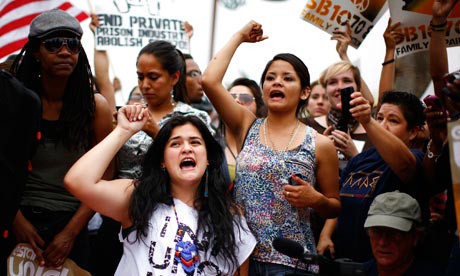 The supreme court's ruling will continue to allow police in Arizona to check the immigration status of people they suspect of being in the US illegally. Photo: Reuters

Barack Obama won a partial victory on Monday when the supreme court struck down key parts of Arizona's draconian anti-immigration laws, though it left in place the hotly contested part of the legislation that Latinos claim will result in racial profiling.

By a majority of five to three, the court blocked implementation of several components of the SB1070 law on the grounds that the federal government had broad powers for setting immigration policy, not individual states.

But Obama had wanted the whole Arizona immigration law declared unconstitutional. Instead, all eight justices voted unanimously to allow the most controversial measure to go ahead, the so-called "show me your papers" section. This will allow police to check the immigration status of people they stop or arrest if it is suspected that the individuals are in the US illegally.
Click to expand...