US forces mounted secret Pakistan raids in hunt for al-Qaida 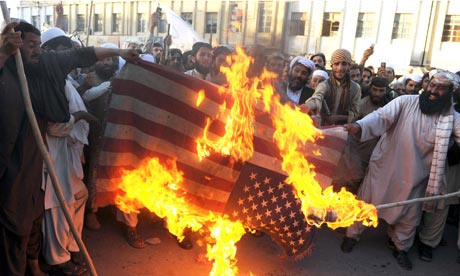 Demonstrators in Quetta protest against US threats to extend drone strikes into the Balochistan region, which US military chiefs fear is becoming a Taliban ‘hub'. Photograph: Banaras Khan/AFP/Getty Images

American special forces have conducted multiple clandestine raids into Pakistan's tribal areas as part of a secret war in the border region where Washington is pressing to expand its drone assassination programme.

A former Nato officer said the incursions, only one of which has been previously reported, occurred between 2003 and 2008, involved helicopter-borne elite soldiers stealing across the border at night, and were never declared to the Pakistani government.

"The Pakistanis were kept entirely in the dark about it. It was one of those things we wouldn't confirm officially with them," said the source, who had detailed knowledge of the operations.

Such operations are a matter of sensitivity in Pakistan. While public opinion has grudgingly tolerated CIA-led drone strikes in the tribal areas, any hint of American "boots on the ground" is greeted with virulent condemnation.

After the only publicly acknowledged special forces raid in September 2008, Pakistan's foreign office condemned it as "a grave provocation" while the military threatened retaliatory action.

The military source said that was the fourth raid of previous years. Two of the others targeted Taliban and al-Qaida "high-value targets" near the border, while the third was to rescue a crashed Predator drone. He said that one of the capture raids succeeded, the other failed and the US sent elite soldiers to the downed Predator because they did not trust Pakistani forces. "People were afraid they would take the parts and reverse- engineer its components," he said.

The secretive nature of the raids underscores the suspicious nature of the relationship between the two allies as they argue about Washington's latest demands.

Disrupting the Taliban safe haven inside Pakistan is the unspoken part of Barack Obama's "surge" announced this month. Although 30,000 troops will be deployed to Afghanistan by next summer, the Taliban and al-Qaida leadership is believed to be sheltering on the Pakistani side of the 1,600-mile border.

In recent weeks Washington has sent a stream of senior officials to Islamabad seeking Pakistani action on at least two fronts: attacks on Sirajuddin Haqqani, a warlord with strong al-Qaida ties based in North Waziristan, and an expansion of the CIA-led drone strikes into the western province of Balochistan.

"This is crunch time," said a senior Pakistani official. "The tone of the Obama administration is growing more ominous. The message is 'you do it, or we will'."

In a recent New York Times article titled Take the war to Pakistan, Seth Jones, a senior civilian adviser to America's special forces commander in Afghanistan, said the Afghan war was "run and organised out of Balochistan" by the Quetta shura, a 15-man war council led by the Taliban leader Mullah Omar. "Virtually all significant meetings of the Taliban take place in that province, and many of the group's senior leaders and military commanders are based there," he said.

The US demands have drawn an angry reaction from Pakistan's military. A senior official with the ISI, Pakistan's premier spy agency, said it was hunting the Taliban in Balochistan, citing 60 joint operations between the CIA and ISI in the province over the past year. "They are going in for kills, they are apprehending people. CIA and ISI operatives depend on each other for their lives in these operations," he said. The official, who spoke anonymously but with official sanction, said Pakistan's military were overstretched. "We can't fight everywhere at once," he said. Since October the army has been at war in South Waziristan, stronghold of the "Pakistani Taliban" whose suicide bombers have killed more than 500 people in cities over the past two months.

US generals say the army is playing a "double game", turning a blind eye to "Afghan Taliban" sheltering in Balochistan because it considers them strategic assets as part of a wider gambit to check Indian influence in Afghanistan.

The ISI official denied such links and accused the US of "scapegoating" Pakistan for its own failures. "During the past year there has been zilch actionable intelligence about the Quetta shura or Haqqani," he said. "If they are so sure Mullah Omar is in Quetta or Karachi, why don't they tell us where he is?"

The CIA declined to comment. "We don't as a rule comment on the agency's relationship with foreign partners or on reports of our operational activities," it said.

The aggressive American approach to Balochistan contrasts with the low-key British tone, despite the fact Balochistan lies across the border from Helmand, where 9,000 British troops are fighting the Taliban.

A British official said the government was reluctant to publicly criticise Pakistan for fear of endangering the relationship between MI6 and ISI in tracking suspected extremists moving between Britain and Pakistan. "That's our priority. It's a matter of national security," he said.

But SAS soldiers have been active in the province. The former Nato officer said SAS units were active in Balochistan in 2002, 2003 and possibly beyond, attacking drug traffickers. "It was of strategic concern to the UK at the time," he said. Until now the US has heeded Pakistani objections to drone strikes in Balochistan. But that could change, if troop casualties mount, a former senior US official warned. "We could get tired and say 'you know what, we are sending in Predators to take out Mullah Omar and his gang in Quetta'. And then we'll see what happens."

Both American and British troops have taken part in secret operations within Pakistani territory, this report is going to be a hard one to explain for Mr Zardari.

it is inconceivable to imagine GOP or PA not knowing these actions. it must be the unstated agreement not to publicise them for fear of mass anger.
pakistan sustains itself on foreign aid and loans, it just does not have either the courage to resisit american actions or the will and strength to fight the terror groups even while they cultivate the groups who they think can be useful for them in the future.
while PA and elements within the govt publicly condemn KL bill for mass consumption, they don't have any alternative to resist in any worthwhile way.
so the 'so called' US raids will continue with or without pakistan's permission.

‘US has intelligence personnel, but no troops in Pakistan’
By Anwar Iqbal
Wednesday, 23 Dec, 2009

Holbrooke also said that the Pakistani military is much more popular in Pakistan today than they were in the beginning of the year. — File Photo

WASHINGTON: The United States has members of its intelligence services in Pakistan but it has no troops, US Special Envoy to Pakistan and Afghanistan Richard Holbrooke said on Tuesday.

‘We have members of our intelligence services in every country in the world,’ Mr Holbrooke told PBS Television when asked if the United States had troops in Pakistan.

‘No members of the American military or CIA are in Pakistan, is that what you’re saying?’ he was asked.

‘I only said there are no American troops in Pakistan,’ said Mr Holbrooke.

The interviewer — Charlie Rose — then asked: ‘So there may be CIA people and special operations people?’

Mr Holbrooke responded by confirming that the US had members of its intelligence services in every country in the world and then quickly added: ‘But this is not a replay of another war (Vietnam) and another part of the world 50 years ago or 40 years ago. We are not doing what you’re alluded to.’

Earlier on Tuesday, Britain’s Guardian newspaper reported that US Special Forces have conducted multiple clandestine raids as part of a secret war inside Pakistan’s tribal areas where Washington is pressing to expand its drone attacks.

In his interview to PBS, Mr Holbrooke not only owned US drone attacks but also said that they had played a key role in eliminating Al Qaeda and Taliban leaders.

When asked how he would evaluate using drones in Pakistan with the risk of civilian casualties, Mr Holbrooke reminded the interviewer that ‘some of the most dangerous people in the world who were alive and posing the most serious threats imaginable to the United States and Pakistan at the beginning of this year are not alive today’.

‘These are very important moves forward. Al Qaeda has been under the most intense pressure, and we are working very closely on the Pakistanis on that,’ said Mr Holbrooke.

Asked if the Pakistanis were refusing to take on the Haqqani network, he said: ‘Let me just put it this way. We’ve had the highest level set of American visitors in Pakistan of any country in the world in the last few months.’

The people who visited Islamabad during this period included the US military chief Admiral Mike Mullen, Secretary of State Hillary Clinton, National Security Advisor James Jones, Centcom chief Gen David Petraeus and the head of the US and Nato forces in Afghanistan, General Stanley McChrystal, said Mr Holbrooke, adding that they made ‘unpublicised’ regular visits to the Pakistani capital.

‘And the sum total of impact you’ve had on the Pakistani government is what?’ he was asked.

‘To be determined. I’m not going to try to give a grade to a work in progress,’ said Mr Holbrooke.

Asked if the United States had made progress in convincing Pakistan to act against the Haqqani group, he said: ‘Yes, absolutely.’

Operations against the militant, he noted, had also helped the military improve its image at home. ‘The Pakistani military is much more popular in Pakistan today than they were in the beginning of the year. They went back into Swat and retook it from the Taliban.

They went into South Waziristan, which is one of the hearts of the insurgency,’ he added.
‘But are they prepared to go further and go more north?’ he was asked.

‘I’m going to leave that to General Kayani and the military for several reasons — it’s their country, it’s a question of military resources, and it’s a military issue which I don’t think should be discussed in public.’