As I have mentioned before Pakistan doesn't have the capabilities to manufacture all parts the missile it essentially uses front companies to illicitly procure these parts from either Chinese companies or North Korean entities or even western countries US Department of Commerce on 15th Dec 2016 has put 7 Pakistani entities under
The Entity List (Supplement No. 4 to part 744) which identifies entities and other persons reasonably believed to
be involved, or to pose a significant risk of being or becoming involved, in activities contrary to the national
security or foreign policy interests of the United States.

The Pakistani entities sanctioned the US are noted below. R&AW should keep watch of these entities.

The Paki sanctioned entities are

The funny thing is that Air weapons complex and NESCOM are there and Pakis shamelessly say they make their own missiles .
Looks like US-Paki relationship is going to go to the dumps.

An example how Pakistani fraudsters procure their proliferation related goods from China.

There is a front company named Galaxy Corporation PVT LTD of Pakistan which is a front for Pakistani Atomic Energy Commission (PAEC).
This fraud company procures dual-use goods with potential utility in the nuclear fuel cycle and WMD-related applications like thyratrons, used as triggering devices in nuclear weapons, and radiation monitors

The above schematic diagram shows many front companies used by Pakistan, China and North Korea to deal with each other 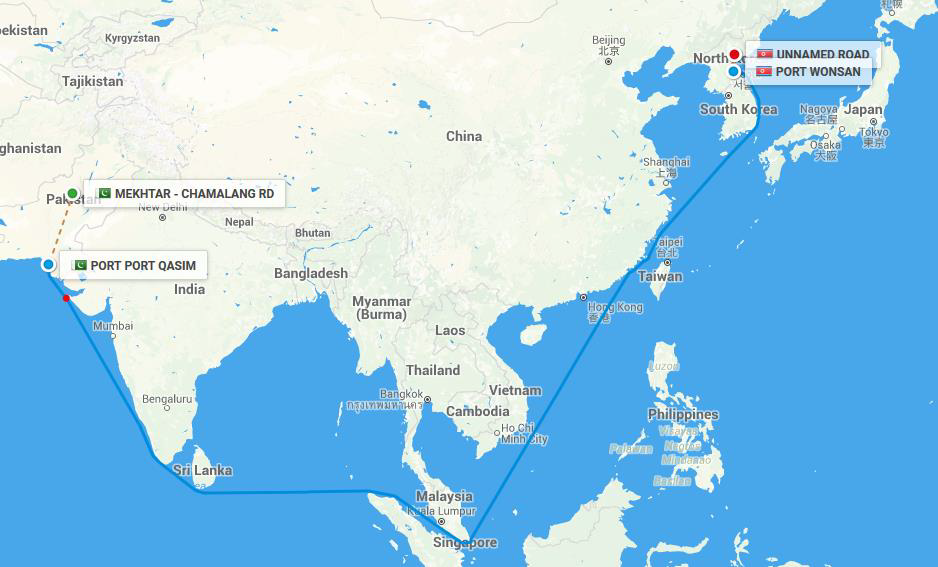 North Korea ship
OUR SPECIAL CORRESPONDENT
New Delhi, Oct. 4: The Indian Coast Guard detained a North Korean vessel for the second time in two months but gave the all-clear to the ship found anchored without permission off the Kerala coast today.

A spokesperson for the navy and the Coast Guard, Commander Roy Francis, said the Hyangro was found stationary in Indian waters when it was supposed to be sailing to Karachi, Pakistan. Coast Guard and naval personnel boarded the ship but found it was carrying no cargo.

The Hyangro was surrounded by two Coast Guard vessels and a naval warship after fishermen reported its presence to the authorities.

The captain of the ship told the investigators he had dropped anchor “because of technical problems in the ship’s tanks that were leaking”. The ship had last made port in Colombo. It is owned by the Pyongyang-based Sinhung Shipping Company.

A navy source in Delhi said later this evening that the crew of the Hyangro had been cleared after questioning. The entire crew of 44 was North Korean.

In August, Indian authorities had detained another North Korean ship, the MV Mu San, in the Andaman islands. The vessel was carrying sugar bound for the port of Umm Qasr, Iraq. It was at first suspected to be carrying military equipment.

But it transpired later that the management of the shipping company had asked the Mu San to loiter in Indian waters because they might get a better price for their cargo in India.

China complicit in it

In making this dramatic revelation, the sources said that entities of the Pakistan Energy Commission (PAEC) have been continuing to supply restricted Items such as ‘ Monel ‘ and ‘ Inconel ‘ material to North Korea in violation of UN sanctions.


The sources said that nuclear materials supplied to the PAEC by Chinese entities have also found their way to North Korea, with the China Atomic Energy Authority (CAEA) recently receiving a written complaint that supplies of a Chinese company, Beijing Suntech Technology Company Limited, to Pakistan were being diverted to North Korea by the Pakistani authorities.

The Chinese Government hushed up the matter as it could have consequences for Beijing’s bid to support Pakistan at the NSG. But this information leaked out of North Korea and came to the knowledge Of Western Governments who are members of the NSG.

In another alarming revelation, informed sources said Pakistan has been giving North Korea equipment which has a direct bearing on producing nuclear weapons. Sources said the Beijing Suntech Technology Company Limited manufactures Vacuum Induction Melting (VIM) furnaces which find application in refining hard metals such as uranium and plutonium, which are used in making nuclear warhead cores. Pakistan is known to have procured these items from China and has passed them along to North Korea.

Behind the scenes Pakistan is aware that it’s nuclear trade with North Korea has been uncovered, but is counting on China to keep the global pressure at bay, said sources.

These diplomats met with Pakistani officers involved in the nuclear program. They were tracked and investigated by the Western authorities as yet another proof of Pakistan’s continuing nuclear links with North Korea.

Based on Western inputs on these links, the United Nations Security Council (UNSC) 1718 Committee, which is monitoring the implementation of sanctions against North Korea, sought information from Pakistan in November 2015 regarding the frequent visits of the two North Korean diplomats from Tehran to Islamabad and Karachi.

At first, say informed sources, Pakistan denied it, but when confronted with photographs and other recorded evidence, Pakistan acknowledged that the two North Korean officials under investigation had indeed visited Islamabad and Karachi.

Highly placed sources said that the West has so far kept this information under wraps in recognition of Pakistan’s value in the war against terror.

But now, when Pakistan has gone into overdrive to upset the equilibrium of the NSG, Western nations of the grouping are saying that Islamabad needs to “look at itself in the mirror “ and ask “how can it run with the hare and hunt with the foxes”, meaning it can’t claim to fulfill the NSG’s requirements, and at the same time, sell nuclear weapons materials to North Korea.

Now nuke proliferation will soon be via the CPEC to Pakistan.

North Korea, China and its slave, Pakistan are the biggest proliferators on earth. They are the spoilt brats of the world. It's the law of the jungle for them. It's time the Chinks stopped preaching. Their brain farts and silly actions are getting to be tiring.
You must log in or register to reply here.
Similar threads
State Department Reprimanded Pakistan for Misusing F-16s, Document Shows
State Department OKs $6.9 billion in arms sales in one day!
Here’s how many foreign military sales the US State Department OK’d in FY19
Republic of India - Department of Animal Husbandry, Dairying & Fisheries
Share:
Facebook Twitter Reddit WhatsApp Link